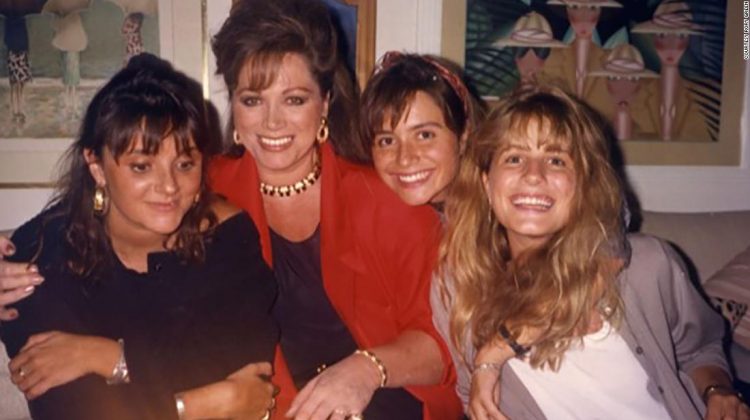 Through our eyes, they were magical places where transformation occurred. As kids, we would slip into her working wonderland and perch at her desk as she read us a child-friendly passage from her latest draft, in an instant becoming Lucky Santangelo, her favorite kick-ass character who manifested all her wildest dreams. Her most essential work tools were the blue or black felt-tip pens she used — writing each of her 32 novels by hand. Those pens were all over our house, in every pocket and every purse, but their pride of place was on her desk in a leopard-print pen holder. If her imagination was never going to run dry, she would make damn sure the pens didn’t either.

The second dedicated space — her dressing table — was where she put down the pen and picked up the makeup brushes, the mascara, the shimmering lip glosses. It was there where she traded jeans for jewels and prepared the world for Jackie Collins. Her public persona was our mother bold and bedazzled, in 1980s sexy shoulder-padded suits with diamonds glittering at her cleavage and an equally bright sparkle in her eye. While this persona might well have developed as a shield at first, it became a brilliant and vivacious part of her character, allowing her to fully articulate herself and showcase her strengths in public.

It was between her writing desk and her dressing table that our mother taught us perhaps the greatest lesson of all: A woman has every right to define her own life, with her own vision and in her own words.

We are often asked what it was like growing up as the daughters of Jackie Collins and our response doesn’t always reflect what one might imagine. Having lived a wild adolescence herself, our mother decided that our upbringing should be a little more reined in. Despite hating the strict girl’s school she attended, she sent us to the very same one — and at pickup time she would rock up in a silver Mustang with oversized sunglasses and a rebel attitude! She was a cautionary parent, warning us often of the dangers of the world and guiding us to be wary of men with an agenda. Having experienced her share of predatory behavior when she was a young girl in Hollywood, she became extremely protective of the three women she was raising.

We didn’t talk politics at the dinner table, but somehow the politics of traditional male and female dynamics were always under scrutiny in our family. Our mother was cooking the dinner — no one will ever be able to replicate her roast potatoes — while also literally bringing home the bacon, using her voice, her skills and her instincts to forge an unparalleled career for a female author. Our father, Oscar Lerman, was not of the generation who changed diapers and embraced stay-at-home fatherhood, but he blazed a trail in his own right, supporting our mother enthusiastically every step of the way and never obstructing her with the toxic masculinity she so often wrote about.

They both led by example, and while our childhood was at times bonkers — how many kids got to say that their godfather was James Bond? — it was also incredibly loving, warm and unexpectedly grounded.

At home she was Mrs. Lerman to our friends, bringing watermelon and sodas out to the swimming pool and driving us back and forth between friend’s houses. At home she was a working mother, writing with a golden lab nestled under her feet and peanut butter cups on hand for snacking. And at home she always freely encouraged our creativity, framing every childhood drawing we presented her with while sharing her own passions for photography and making mixtapes.

When the limo did pull up to the door and she stepped back out into the public eye, she showed us that women are complex beings and need not be confined by only one aspect of themselves. She defied the cultural norms and refused to be dictated to, taking the male gaze that had so often objectified her in her youth and turning the tables on the men who interviewed her. Once, we watched her on TV outrageously flirting with an Australian late-night host, so convincing in her banter that we worried she was going to leave our father and run away with this TV personality. Of course later that night she came back to the hotel and reassured us that she wasn’t running away with anyone! From that point on, we understood that there were multiple dimensions to our mother as multifaceted as the diamonds she wore, and that’s so important for daughters to know.

With a career that spanned an epic 45 years, our mother was forever a teenager at heart. She rediscovered herself on the pages of her novels every time she sat down to write, and she brought millions of grateful readers along for the ride.

She was never going to be defined by any one label, including the cancer she was diagnosed with at the end of her life. She taught us to write our own stories and find our own voices over and over again. And when the plot twists tangle around your feet and you feel as if you can’t move forward, she taught us — and all of her readers — to take a breath and turn the page.