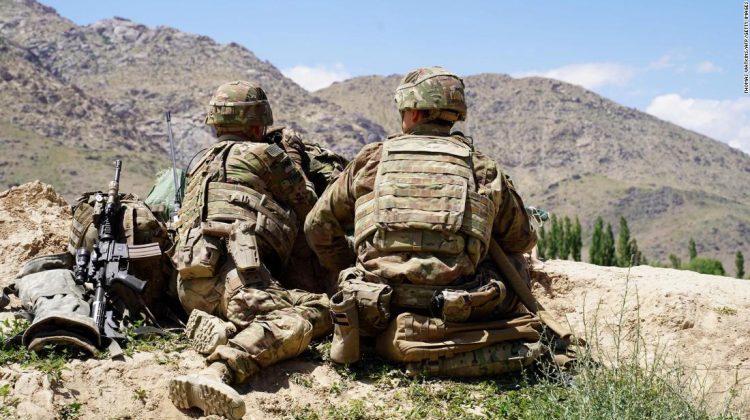 The two top officials in Afghanistan are meeting Friday with President Joe Biden at a moment when much of their country is in danger of being swallowed up by the Taliban.

The meeting with Afghan President Ashraf Ghani and Chief Executive, Dr. Abdullah Abdullah, comes after a report by the US Congressional Research Service released earlier this month that concluded, “By many measures, the Taliban are in a stronger military position now than at any point since 2001.”
In the past days, the Taliban have launched a major offensive in northern Afghanistan far from their traditional strongholds in the south and east of the country.

Habiba Sarabi, an Afghan government negotiator engaging in talks with the Taliban, told CNN, “With the imminent removal of all United States forces in just a few weeks, the Taliban are moving rapidly, resulting in a swift deterioration in the security environment. We were caught off guard by the scale and scope of setbacks in the north.”

The United States has contributed to the deteriorating security situation by consistently saying for more than a decade that it is leaving Afghanistan, which has undermined the Afghan government and strengthened the resolve of the Taliban who have won at the negotiating table from the Americans what they failed to win on the battlefield.

Without swift action by the Biden administration we could see in Afghanistan a remix of the disastrous US pullout from Saigon in 1975 and the summer of 2014 in Iraq when ISIS took over much of the country following the US pullout from the country three years earlier. That withdrawal was negotiated by then-vice president Biden.

The Foundation for the Defense of Democracies, a Washington-based think tank, assesses that the Taliban now control 25 per cent of the Afghan population, while the government controls 40 per cent of the population, and just over a third of Afghans live in regions that are contested between the Taliban and the government
The Taliban have seized 50 of the country’s 370 districts since May, according to the United Nations.

The premise of the many years of US-Taliban negotiations has been that the United States will draw down militarily in exchange for the Taliban severing relations with al-Qaeda — the terrorist organization it harbored at the time of the planning and execution of the terrorist attacks against the US on September 11, 2001.

This has been, to put it charitably, a charade, according to the United Nations, which reported just this month that the two groups remain “closely aligned and show no signs of breaking ties.” The UN report notes that Taliban-al Qaeda ties have actually “grown deeper.”

Meanwhile, US presidents going back to Barack Obama have consistently said the United States is leaving Afghanistan, but in the end, Obama left 8,400 troops when he completed his second term. Donald Trump also wanted to go to zero, but he left at least 2,500 soldiers.

In both the case of Obama and Trump, the Pentagon made the case that leaving a relatively small number of troops in Afghanistan acted as an insurance policy to prevent the Taliban taking over much of the country.

Now comes Biden, who has promised to go to zero troops by the 20th anniversary of 9/11; a more inappropriate end-date for the US presence would be hard to conjure.

The withdrawal of all US troops means that America’s NATO allies in Afghanistan are also pulling the plug. There were 7,000 allied troops in the country when Biden announced he was going to zero, but now they are also all heading for the exits.
After Biden’s announcement, the Australians decided to close their embassy in Kabul. Other countries will likely follow.
The Biden administration has said that some six thousand American contractors will have to leave Afghanistan as well.
This move completely undercuts the Afghan Air Force, which has capable pilots but relies on American contractors to service the complex helicopters and aircraft it has been given by the US government. Without those contractors the Afghan Air Force will be effectively grounded and the Afghan government would lose a key military advantage over the Taliban.
The US is also leaving in the lurch the many thousands of Afghans who have helped the US military. The nonprofit, No One Left Behind, has documented more than 300 cases since 2014 in which Afghans who had worked with the US military or their family members were killed by militant groups in Afghanistan.
Eighteen thousand Afghans who have worked with the US military are now seeking visas to leave Afghanistan for the United States as they quite reasonably fear for their lives, but these visas are generally taking many years to process. They also don’t account for a further 53,000 of their family members who are also trying to flee the wrath of the Taliban.
All this comes at a time when the Biden administration is admitting the lowest number of refugees in American history, even fewer than Trump, according to a report by the International Rescue Committee (IRC) that was released in April. The IRC found that the Biden administration will likely admit only around 4,000 refugees from around the entire world this fiscal year.

And, of course, all the hard-won gains made by women and minorities in Afghanistan over the past two decades now stand to be lost.

The Hazaras, a long-discriminated against minority in Afghanistan because of their Shia religion, make up around 15 per cent of the population. They were massacred by Taliban forces before 9/11, according to Human Rights Watch. The Taliban, which is largely made up of the Pashtun ethnic group, continue to attack Hazaras, as does the local branch of ISIS.
Hazaras are now arming themselves in anticipation of a return to the ethnic civil war that wracked Afghanistan in the mid-1990s.

Afghan women are understandably frightened that as the Taliban assert their power they will lose their rights to work and to be educated.

So how might anything be salvaged from this mess?

First, American contractors who are willing to stay in Afghanistan to service the planes and helicopters of the Afghan air force should be allowed to stay. Those contractors could be secured by elite Afghan commando forces.

Second, Afghans who have helped the US military must have their visas processed expeditiously, even if it means doing so in neighboring countries such as Pakistan. And if the visas can’t be issued in a timely fashion, the US government should have a plan to evacuate the thousands of Afghans whose lives may be at risk.

Third, Turkish troops must be allowed to continue to maintain security at Kabul airport. Turkey has long secured the key airport as part of its NATO duties and without security forces at the airport the United States and other nations will likely have to end their diplomatic presence as will international aid organizations, which would be in no one’s interests, including the Taliban who understand how dependent Afghanistan is on international support.

Fourth, the United States should make clear to the Taliban that it will intervene militarily in Afghanistan using airstrikes if the Taliban don’t sustain their agreements to sever ties with al-Qaeda and engage in genuine peace negotiations with the Afghan government.