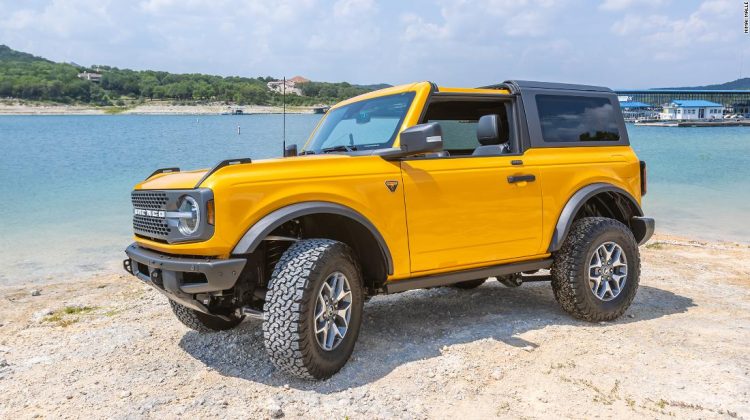 We’re not talking about the Bronco Sport, which you may have already seen driving around. That model is smaller, and somewhat related to the Ford Escape and the new Ford Maverick small pickup. This new Bronco is bigger and taller and it’s made to take on far more serious off-road terrain. It’s somewhat related to the Ford Ranger truck.
So while the small Bronco Sport can drive off-road, the Bronco can drive places where “road” shouldn’t even really be part of the word.

The Bronco has just gone into production in Michigan. Prices start at about $28,500, a little higher than the Bronco Sport. Prices for nicer, better equipped versions start at more than $40,000, though.

A nice perk buyers get with the Bronco is a free ticket to one of the four off-road driving parks, called Bronco Off-Roadeos, that Ford is opening around the country.

Ford invited journalists to try out the first one it opened just outside Austin, Texas. We were able to drive Broncos up and down its steep hills, through its rain-swollen creeks and across its slippery rock-faced inclines.

We also drove a variety of Broncos with both optional turbocharged V6 engines, the 270 horsepower base motor and the larger 310 horsepower engine. Both come with standard four-wheel-drive, and, with the smaller engine, a manual transmission is also available with seven speeds, including a low-speed “crawler” gear for off-road.

I’m not an experienced off-road driver, but I’ve done it before in Land Rovers, Jeeps and, just recently, Nissan Pathfinders. I’ve gotten used to the apparently physics-defying capabilities of a good four-wheel-drive system and proper off-road tires. But the Bronco seems to genuinely be on another level. It can do things a sane person would never think a four-wheeled vehicle could.

For example, it has something called Trail Turn Assist, which locks the brakes on the inside rear wheel during a turn so the SUV essentially pivots around that wheel. That allows for super-tight turns in small spaces. After I reached the top of a steep, rocky hill, the trail turned nearly 90˚ to the right. I pressed the Trail Turn Assist button and steered around to face across the narrow ridge.

I also tried out the Bronco’s one-pedal driving feature, which allows the accelerator and brakes to be operated using just the accelerator pedal. I’ve had practice driving electric cars that way so it was easy to get the hang of it and it made going over undulating surfaces easier than having to use two pedals.

Some of the Bronco’s off-road prowess is simply a matter of design. The wheels are way out close to the front and back ends. This allows the Bronco to drive right up to a steep hill and, just when it seems the front bumper is about to smash into it, the front wheels grab at the base of the hill and pull it right up.

Its shoebox-shaped body also makes it easy to see where the front corners are, a valuable trait on tight trails. More than once, I skirted a tree or rock face with inches to spare, but knew I was clearing it as I turned a corner.

The Bronco also has an available suite of cameras to help with that, as well, which help drivers spot obstacles on trails and see over the hood when cresting steep hills.

As on many SUVs, there are also different driving modes for different environments. Besides that, there are buttons for doing various, more specific things like locking the rear differential. The differential is a set of gears that allows each front or back wheel to spin at a different speed from the one on the opposite side. That’s necessary, because, when turning, the wheel on the outside of a turn has to spin slightly faster than the one on the inside. (It has a longer path to cover.) Locking the differential makes both wheels turn at the same speed, but it also makes sure both wheels are getting full engine power. It’s not so good when turnin,g but can be very useful when driving on mucky or slippery surfaces. During my test drive, it allowed the Bronco to climb up the damp surface of what was, basically, a giant rock.

A big rain storm the night before our off-road drives also put the car’s Bronco’s water wading prowess to test. I was about to hop into a doorless Bronco for a test drive — as on a Jeep Wrangler, the doors can be easily removed — when someone warned me, “Not that one. You’re going to want doors.”

I did. I drove down a steep, muddy trail and splashed into a rippling brown stream. Without doors, I would have had fish swimming around my feet as water ran from the sides. I stopped for a few minutes while photographers set up for a shot and I listened to a weird burbling sound like a motorboat. It was the Bronco’s exhaust bubbling up through the muddy water. With the cameras all set up, I moved on down the stream pushing a wave of water ahead of me.

Where the Bronco really stands apart from Wrangler, though, is on the road. It’s ride is smoother and more easily controlled over smooth pavement. On its optional off-road tires, there was a bit a tendency for the Bronco to wander from its lane when not carefully attended to, but it wasn’t terrible. Given those tires, the steering provided decent feel and responsiveness. Also, a lane keeping assistance system alerted me when this was happening. It’s not particularly quick, but the Bronco’s turbocharged V6 engine helped pull it up hills on the road, as well as off.

Recently, a number of auto makers, such as Honda, Nissan, and even Airstream, have tapped into America’s rediscovered love of the outdoors. With the Bronco, Ford is just taking it much, much farther. Be careful out there.