Hiding executives’ income was such an established practice at Donald Trump’s family business, according to New York prosecutors, that it kept two sets of ledgers for the purpose: one with an executive’s stated pay to report to the tax authorities; another that tallied all the extra perks surreptitiously paid for by the company.

For Allen Weisselberg, the Trump Organization’s longtime chief financial officer, those “off the books” perks ran to more than $1.7m over a 15-year period, according to a criminal indictment unsealed in a New York court on Thursday. They included things like his grandchildren’s school tuition, rent for a luxury apartment, two Mercedes car leases and a flat screen television.

For the Trump Organization, there was the benefit of reducing its own payroll taxes, which are tied to employee compensation, prosecutors alleged.

“This is not a standard practice,” Carey Dunne, a top assistant to Cyrus Vance, the Manhattan district attorney, told reporters. “This was a secret and audacious illegal payment scheme.”

Through a blitz of statements, Trump’s lawyers derided the case as yet another nothingburger, to borrow a term from Don, Jr.

“This is all they have?” asked Ronald Fischetti, Trump’s lawyer. “In my 50 years of practice, I have never seen this office bring a case like this and, quite frankly, I am astonished.”

This was not a case of a year or two of taxes unpaid on a car. This was a scheme, according to the indictment, perpetuated for well over a decade

While New York City was being ravaged by “subway slashings, gun violence and hate crimes”, the Trump Organization said, Vance had spent years and millions of dollars to bring a case over fringe benefits. “Make no mistake — this is not about the law; this is all about politics.”

On Fox News, meanwhile, presenters and guests took turns taking umbrage. “The Democrats have a good reason for ignoring violence in the streets,” said anchor Jesse Watters as he introduced a primetime segment on the case. “They’ve been busy perverting the criminal justice system to get the Trump Organization.”

The question is what a jury will make of the case — and what Weisselberg will do? The loyal lieutenant who has described himself as Trump’s “eyes and ears” pleaded not guilty after entering the courthouse through a back entrance on Thursday morning.

With the threat of prison time looming, Vance and Letitia James, the New York attorney-general, are hoping the double ledgers and other evidence they have uncovered will persuade the 48-year veteran of the Trump Organization — a man who was hired by Trump’s father Fred — to break with the former president and aid their investigation.

“I don’t see how you can’t take this seriously,” said Daniel Horwitz, a former prosecutor in Vance’s office who now leads the white collar law practice at McLaughlin & Stern. “This was not a case of a year or two of taxes unpaid on a car. This was a scheme, according to the indictment, perpetuated for well over a decade.”

In light of the allegations, Horwitz predicted reputable businesses would be reluctant to deal with the Trump Organization.

Daniel Hemel, a law professor at the University of Chicago, who specialises in tax issues, also saw heft in Vance’s case. “The fact that the Trump Organization was maintaining two sets of separate books — that’s pretty close to a smoking gun,” he said, likening the case to that of the late Leona Helmsley, the infamous “Queen of Mean”.

This is all they have? In my 50 years of practice, I have never seen this office bring a case like this and, quite frankly, I am astonished

Helmsley spent 19 months in prison after then-US attorney Rudolph Giuliani accused her in 1989 of fraudulently billing millions of dollars of home renovations to her husband’s property company to avoid taxes.

“It’s almost like a playbook on different ways to commit tax fraud,” Adam Kaufmann, another veteran of Vance’s office now in private practice, said of the actions described in the indictment.

Like others, he noted Weisselberg’s alleged position as both the orchestrator and beneficiary of the scheme, and believed his title as chief financial officer would also make it difficult to plead ignorance on tax and accounting matters.

Another lawyer agreed, saying incredulously: “It’s one thing to get a company car, but private school tuition?”

Still, some experienced defence lawyers, who declined to speak publicly, were underwhelmed by the much-anticipated charges. “I realise that fringe benefits add up over 15 years but this is just part of the American fabric,” said one, concluding: “If this is an attempt to flip Weisselberg — and they can’t make a secondary case without flipping him — that’s deeply problematic.” 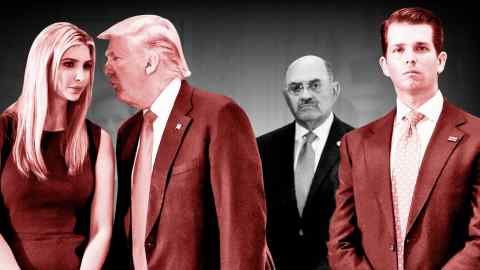 Another attorney believed that such a case would typically be resolved without criminal charges. They worried that a zoo-like atmosphere would ensue if and when Weisselberg eventually goes to trial, with Trump using the occasion to whip up his supporters. “You’re going to give him a bully pulpit — why?”

One of the more contentious elements in the indictment is a grand larceny charge. Prosecutors argued that Weisselberg’s alleged fraud allowed him not only to avoid paying taxes but to claim more than $94,000 in federal tax refunds over the years, which he was not owed. In essence, they called that a form of property theft, stiffening the potential sentence he could face. But some lawyers dismissed that as a stretch, and predicted the charge would ultimately be tossed out by the judge.

Even so, that would still leave behind other vivid elements of the indictment likely to resonate with jurors, according to Mark Zauderer, a defence lawyer. In addition to the double ledgers, for example, prosecutors also alleged that Weisselberg and his wife claimed not to be residents of New York City in order to avoid local taxes. All the while they were the sole occupants of a Trump apartment on Riverside Boulevard.

“It is easy to lose sight of the fact that these are serious charges with significant penalties, and the supporting facts alleged in the indictment are easy for jurors to understand,” Zauderer said. “And they are likely to generate resentment in the hearts of jurors who don’t benefit from the kind of tax schemes alleged by the district attorney and the grand jury.”