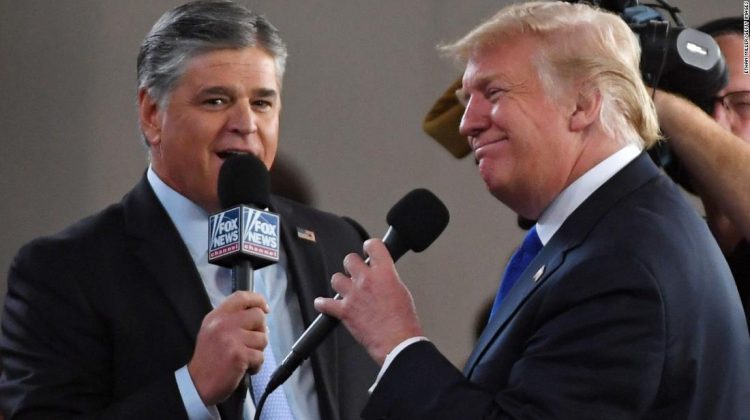 But he still has a telephone! And that means he can, whenever he wants, call into friendly outlets to spout his latest, um, observations on the state of the country and world.

Which is what he did on Wednesday night, chatting with Fox News’ Sean Hannity about, well, everything. Below the lines you need to see.

1. “Well, I guess the overall is, we didn’t get anything. We gave a very big stage to Russia, and we got nothing.”

2. “And performance art, you will take a look at how various people performed, namely, the two people. And you have to form your own judgment. It’s not for me to say.”

Uh, you literally just said that “we got nothing.” Also, “performance art?”

4. “Look, for five years, from the day I came down the escalator, we have been under investigation, and it turned out to be all false stuff. It was a terrible thing with the ‘Russia, Russia, Russia,’ which actually made it difficult to deal with Russia.”

Just to be clear here: Robert Mueller’s special counsel investigation did not conclude that the allegations against Trump and his 2020 campaign were “all false stuff.” Here’s exactly what Mueller wrote: “(I)f we had confidence after a thorough investigation of the facts that the President clearly did not commit obstruction of justice, we would so state. Based on the facts and the applicable legal standards, we are unable to reach that judgment. … Accordingly, while this report does not conclude that the president committed a crime, it also does not exonerate him.”

5. “And now it’s up to 19 different things where we were accused, and it turned out to be absolutely false, whether it’s the Wuhan lab, the good old Wuhan lab. When I mentioned that, it was like a firestorm. Hydroxychloroquine, now great reviews are coming out on that.”

While the Biden administration has said that the possibility exists that the coronavirus originated from a lab leak in Wuhan, neither it nor anyone in the scientific community has said that’s where the virus definitively originated. Trump’s claims about the efficacy of hydroxychloroquine to combat Covid-19 appears to be rooted in a false reading of emails from Dr. Anthony Fauci.

6. “But it’s all coming out. I think the people understand it. I think that, in many ways, we’re stronger now than ever before. They understand that deception and the horror that these people put this country through. It’s really very sad, actually.”

7. “But literally, from the day of that wonderful ride down the escalator, from that moment on, investigation after investigation.”

Trump’s fascination with a 15-second ride down an escalator is both fascinating and utterly weird.

9. “Everyone still waiting for Durham, what happened to Durham? How was that allowed to go into another administration? It’s just — it’s shocking.”

The John Durham probe, looking into the origins of the FBI counter-intelligence investigation into Russian interference in the 2016 election, is ongoing. We know little about it other than Durham and his team spent $1.5 million on the investigation between October 2020 and March 2021.

10. “But hopefully, you have an attorney general now that will be fair. But I will say that the people running the justice — and the people in it, don’t forget, you have tens of thousands of people, and they were put there by Obama.”

The people who oversaw the creation of the Durham investigation and the timeline of its progress were ALL appointed by Trump.

11. “There was such guilt and such a horrible thing happened. They were spying on my campaign. You know, if you think about it, all the way back, almost at the beginning, when I — when I made a statement that my campaign was spied on, it was one of the biggest moments. It was — nobody could believe it.”

12. “Then it turned out that I was more than spied on, much worse than being spied on. But they didn’t do anything about it. And to me, that’s a terrible thing for our country.”

Trump was criticizing the lack of reciprocity of certain countries in selling American goods here. But for the record, from what I could find, there were more than 200,000 Chevrolets registered in Germany in 2019. In the first half of the last decade, roughly 20,000 Chevrolets were being sold in France a year. Both of those numbers are larger than “none.”

14. “And then we got hit by the pandemic. And nobody did as good a job with the pandemic as we did.”

In an October 2020 CNN poll, 6 in 10 Americans disapproved of the way Trump and his administration had handled the coronavirus pandemic. So …

Just a reminder: The Mueller report, as well as the Senate Intelligence Committee, concluded that Russia meddled in the election to help Trump and hurt Hillary Clinton because they believed the billionaire businessman would be better for their interests.

Well, other than the myriad of human rights abuses, the ransomware attacks and the interfering in an American election and then lying about it …

17. “They’re making windmills all over the place to ruin our land and kill our birds, to kill everything.”

Trump is consistent about very, very few things. His hatred of windmills is one of them.

Trump appears to be referring here to an allegation that a firm affiliated with Hunter Biden received $3.5 million in 2014 from the wife of late Moscow mayor Yuri Luzhkov. BIden has denied it. CNN fact-checkers rate the claim “false.”

20. “Now, when you look at China, and you look at the military apparatus, which I was really doing a big job on.”

21. “I really hope and I believe it was an accident, it was incompetence. I guess some people don’t necessarily agree with that. They think maybe there was purpose to it, which would be absolutely terrible.”

This is Trump floating the conspiracy theory that Covid-19 was purposely released from a lab in Wuhan. Hannity, in case you were wondering, didn’t call him out on that. Oh, you weren’t wondering? Right.

23. “I can tell you from personal experience, Canada is very, very tough. Canada is as tough as anybody.”

I can’t help but think Justin Trudeau’s lustrous mane has something to do with this. Somehow.

26. “You know, they talk about me with Russia, I get along with Putin. I had a good relationship with Putin. But I was so tough.”

Yes, yes, you’ve have said that.

27. “So, I’m very honored to say that my endorsement means more than any endorsement that has ever been given by anybody.”

29. “But if you look at the numbers, people are liking me more now than ever before.”

Can you imagine actually saying this sentence out loud? Also, he’s not getting more popular.

Yeah, this feels like a good place to end.