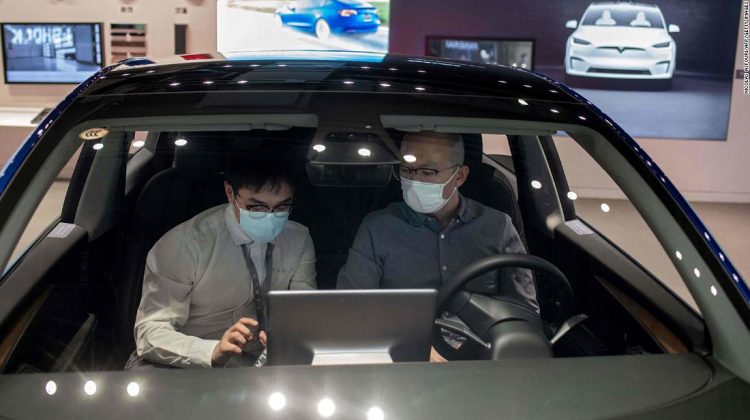 Nearly all of the vehicles that Elon Musk’s electric carmaker has built and sold in China since opening a Gigafactory in Shanghai are being recalled over concerns about the cruise control system.
The problem, according to Chinese regulators, is that the system can be accidentally activated in certain models, resulting in unintended acceleration. The recall includes 35,665 imported Model 3 vehicles and 249,855 Model 3 and Model Y vehicles made at the Shanghai plant, or almost every single locally made car that Tesla (TSLA) has sold in China since January 2020.

Tesla apologized for the recall over the weekend, adding in a statement that it would “strictly follow national regulations and keep improving our safety protection.”

And the setback isn’t as damaging as a conventional recall, since it can be resolved through a software update that doesn’t require customers to return their cars, according to Tu Le, founder of Beijing-based consulting firm Sino Auto Insights.

“It’s just a patch,” he said. “Most [customers] probably will not know anything’s happened to their car.”

Still, the scale of the problem is a “black eye” for Tesla, according to Daniel Ives, a managing director of equity research at Wedbush Securities, who noted that the announcement comes after a string of controversies for the carmaker.
The company was recently the target of a protest at the country’s largest auto show in Shanghai by Tesla owners, who complained about problems with their cars. Regulators have also questioned the quality of Tesla’s Shanghai-made Model 3s, and there have been reports of heightened scrutiny of the company from China’s military.

“Let’s be clear: this is not the news bulls want to see as it adds to the negative PR issues in China,” Ives wrote in a note to clients Sunday. Musk has predicted that the world’s biggest car market could also eventually become Tesla’s most important.

Need for a ‘smoother road’

China isn’t Tesla’s only concern. The company’s stock is down about 25% from a peak over the past year as it contends with short sellers and concerns about its management bench.

But the string of debacles in China isn’t helping. At the Shanghai Auto Show in April, the company’s booth was briefly besieged by protesters, with one woman climbing on top of a Tesla vehicle to allege that her car had defective brakes. The company initially irked customers with its response, which had vowed to address concerns but “not compromise with unreasonable demands.”

After facing criticism, Tesla later apologized to “car owners,” and vowed to “carry out strict self-examination and self-correction, while cooperating with the investigation of relevant government departments.”

That firestorm appeared to put a dent in the company’s sales, albeit briefly.

In April, the electric car leader sold fewer than 26,000 vehicles in China, down 27% from March, according to figures released by the China Passenger Car Association (CPCA).

“The cumulative effects of negative publicity has affected them,” said Le, noting that Tesla’s troubles “without question” gave its competitors an opening. Chinese electric vehicle manufacturers such as Nio, (NIO) Xpeng (XPEV), and Li Auto (LI), for example, all reported improved domestic sales during that period.

Last month, however, Tesla’s sales picked back up to more than 33,000 units, according to the CPCA.

Ives said he believes the recall “is a bump in the road and does not derail the near-term or long-term bull thesis for Tesla China.”

“However, going forward it needs to be a smoother road on autopilot safety, otherwise the PR black cloud will continue,” he added.

Tesla has tried to assuage officials in China by addressing criticisms. Last month, it announced it had set up a new data center in mainland China to keep any data it collects from locally sold cars within the country’s borders — a step that came as the company faced questions about whether its cars could ever be used for spying.
Even Musk has stepped in, reassuring officials of the company’s “future in China.”

But some analysts are calling on the company to do more. In his note Sunday, Ives said that the onus was on the CEO and his team to ensure “these issues are in the rear view mirror.”

Le also said that the automaker should focus on building more goodwill in the country by doubling down on customer service and improving ties with authorities.

“If I was hired by Tesla … the first thing I would do is I would say, ‘[Let’s] try to poach somebody from Volkswagen or GM who has the longest tenure in China from the government relations team,'” he said.

— CNN’s Beijing bureau and Philip Wang contributed to this report.