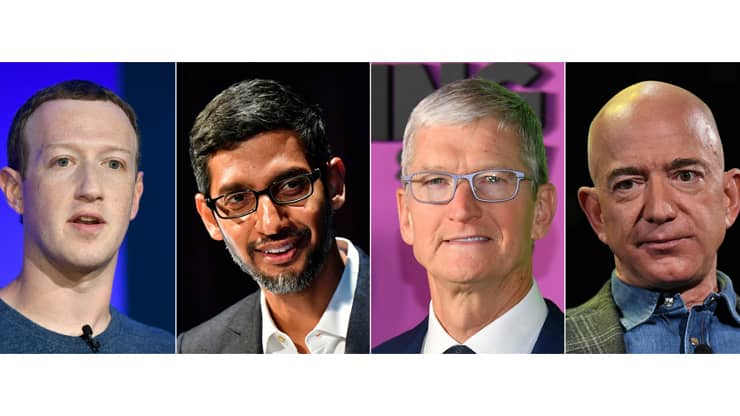 Tech giants that could be broken up under a series of new antitrust bills are speaking out against the measures as lawmakers are set to debate them on Wednesday.

Amazon and Google both released statements on Tuesday opposing the bills. Apple and Facebook, which were also targets of the House Judiciary Committee’s investigation into digital markets, have yet to put out their own statements.

But industry groups backed by the tech firms have also pushed back on the legislation, arguing it would prevent the companies from operating popular consumer services and ultimately hurt small businesses and entrepreneurs.

The six bills set to be considered at Wednesday’s markup, where lawmakers will discuss the proposals and any amendments before deciding whether they should advance, would have a profound impact on the tech industry and possibly beyond it.

Amazon and Google both called for the Judiciary Committee to pump the breaks on the legislation, which is headed to a full committee markup in an unusually short period of time — less than two weeks since most were introduced.

Google VP of Government Affairs and Public Policy Mark Isakowitz said in a statement the company isn’t opposed to new regulation, but warned the bills on the table would “break” popular consumer services.

“As many groups and companies have observed, the bills would require us to degrade our services and prevent us from offering important features used by hundreds of millions of Americans,” he said. “This would all dramatically undermine US technology leadership, damage the way small businesses connect with consumers, and raise serious privacy and security concerns. We respectfully recommend that these consequences receive more thoughtful consideration before Congress takes action.”

Amazon VP of Public Policy Brian Huseman also warned of “significant negative effects” on Amazon consumers and small- and medium-sized businesses that sell on the platform. Amazon is still reviewing the bills, he added.

“More than a half million American small- and medium-sized businesses make a living via Amazon’s marketplace, and without access to Amazon’s customers, it will be much harder for these third-party sellers to create awareness for their business and earn a comparable income,” he said in a statement. “Removing the selection of these sellers from Amazon’s store would also create less price competition for products, and likely end up increasing prices for consumers. The Committee is moving unnecessarily fast in pushing these bills forward. We encourage Chairman Cicilline and committee members to slow down, postpone the markup, and thoroughly vet the language in the bills for unintended negative consequences.”

Apple and Facebook did not provide comments on the bills.

Two of the bills could require structural changes, or break-ups, at several of the platforms because of their prohibitions on owning and operating business lines that present conflicts of interest and stipulations against discriminatory business practices.

Others would give regulators a leg up in antitrust proceedings by shifting the burden of proof in merger cases onto dominant platforms, raising filing fees for mergers and giving state attorneys general more say in the venue of their antitrust cases. Another bill in the package would make it easier for consumers to switch platforms by mandating the services allow users to take their data with them.

The bills would specifically apply to platforms with over $600 billion in market cap and 50 million monthly active U.S. users, limiting their application to only the largest of businesses. But industry players argue that their implications will reach far beyond their own walls because of the vast impact of their services on consumers’ lives.

Prior to the company statements, industry associations funded by several of the companies have similarly pushed back on the bills and asked for additional time to consider their implications. TechNet, whose members include Amazon, Apple, Facebook and Google, wrote to the Judiciary Committee on Monday requesting the panel hold hearings, “rather than rush the legislation from introduction to markup in just 12 days.” Comcast, which owns CNBC parent company NBCUniversal, is also a member of the group.

TechNet and a dozen other advocacy groups also signed a letter warning of the negative impacts two of the bills introduced by the Chairman and Vice Chair of the antitrust subcommittee, Rep. David Cicilline, D-R.I., and Rep. Pramila Jayapal, D-Wash., would have on consumer services.

Cicilline’s American Choice and Innovation Online Act would prohibit dominant platforms from giving its own services advantages over other competitors on their platforms. Jayapal’s Ending Platform Monopolies Act would prevent dominant platforms from owning businesses that present clear conflicts of interest, such as those that could incentivize a platform to favor its own services.

“Rep. Cicilline’s bill would ban Google from displaying YouTube videos in search results; ban Alexa users from ordering goods from Amazon; block Apple from preinstalling ‘Find My Phone’ and iCloud on the iPhone; ban Xbox’s Games Store from coming with the Xbox; and ban Instagram stories from Facebook’s newsfeed,” the industry groups wrote to members of the committee. “Rep. Jayapal’s bill would force free apps like Google Maps, YouTube, WhatsApp, Instagram, LinkedIn, iMessage, and FaceTime to be divested from their parent companies, putting at risk these free services and making them less accessible to the public.”

Rich Luchette, a spokesperson for Cicilline, called the industry’s claims “baseless conspiracy theories,” in a statement to CNBC.

“Big Tech’s record on misinformation speaks for itself,” Luchette said. “Just as they’ve profited off QAnon and anti-vaxxers in the past, they’re now spreading baseless conspiracy theories one day before Congress takes its most significant action to date to break their monopoly power. Big Tech likes having monopoly power and they’re going to do everything they can to hold on to it, including lying about bills that will build a stronger online economy by giving consumers, workers, and small businesses greater opportunity, innovation, and choice.”

A spokesperson for Jayapal did not immediately respond to CNBC’s request for comment, but told Bloomberg that the bill “requires dominant platforms including Amazon to divest lines of business — such as Fulfillment by Amazon — where the platform’s gatekeeper power allows it to favor its own services.” Regulators and courts would ultimately be the ones to determine how they are applied.

Another group speaking out against one of the bills is the National Venture Capital Association, whose members include several tech firms or their venture capital arms (including Comcast Ventures). The NVCA said it opposes one of the new bills that would shift the burden of proof onto dominant platforms to show new mergers would not violate antitrust laws. As it stands, the government must prove a transaction will lessen competition and harm consumers, which some enforcement advocates say is too difficult to do effectively under current case law.

The NVCA warned that start-ups would be the ones to suffer from such a bill because getting acquired is the “most likely liquidity opportunity” for entrepreneurs and “necessary to make startup investment attractive relative to other asset classes that hold for shorter-term.”

“Barring acquisitions of companies by select acquirers would close the door to this opportunity for many startups, depressing the economics of startup investment and therefore creating a significant disincentive for new company formation, job creation, and innovation in our country,” the group wrote.

Spokespeople for the lawmakers who introduced the bill, Reps. Hakeem Jeffries, D-N.Y., and Ken Buck, R-Colo., did not immediately provide comment.

The Judiciary Committee will consider the antitrust bills Wednesday at 10 a.m. Eastern Time.

WATCH: Here’s why some experts are calling for a breakup of Big Tech after the House antitrust report