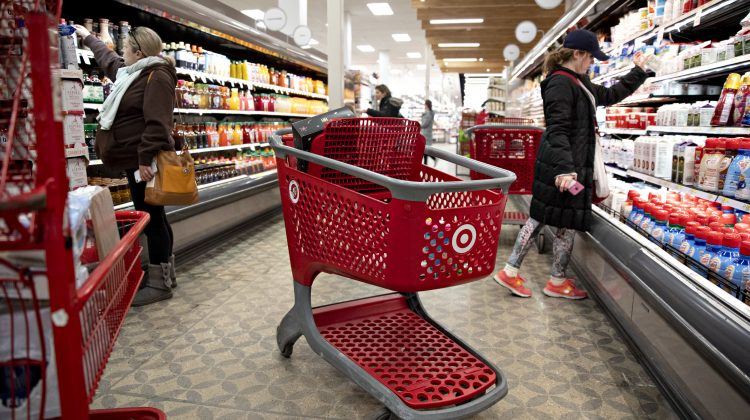 As Target kicks off a rival sales event to go head-to-head with Amazon Prime Day, the big-box retailer is spotlighting its grocery department. It is adding discounts and promotions to nudge customers toward its aisles of cereal, meat and soda.

Target rolled out Deal Days to compete with Prime Day in 2019, but this will be the first time Target is using the event to promote groceries. Its discounts will span Sunday through Tuesday — a day longer than the e-commerce giant’s event.

It’s likely that Target sees the grocery category differently these days. Groceries were a key reason why Target’s sales soared and its market share grew during the pandemic. As people hunkered down at home, dinner ingredients, pantry staples and snacks drove trips to the store. Target got a head start in the early months of the health crisis, as it kept its doors open through lockdowns as an essential retailer. When rival stores reopened, Target still drew in shoppers with its variety of merchandise from eggs to workout tops as people consolidated trips and filled up bigger baskets.

Even as people make social plans and return to dining out, Target sees its grocery aisles as a way to keep people coming back. The next few months will test whether Target and other grocers can convince people to keep filling up fridges and cooking, even as they make plans to meet friends for drinks or take the family out for dinner.

Prior the pandemic, consumers in the U.S. spent more each month at restaurants and bars than grocery stores. That pattern reversed in March 2020. Over the past two months, the habit of spending more on dining out has returned, according to data from the U.S. Census Bureau. That leaves grocers competing for a larger piece of a shrinking pie.

At stake during Amazon Prime Day is a level of spending that rivals the busiest days of the holiday shopping season. Online spending in the U.S. during the two-day sales event is expected to top last year’s all-time record of $10.4 billion and surpass last year’s Cyber Monday, according to an analysis by Adobe Analytics that’s based on a survey of more than 1,000 consumers and visitors to U.S. retail sites. Nearly 60% of consumers said they plan to shop online during Prime Day, according to Adobe’s survey.

Retailers of all sizes have seized upon the shopping holiday, getting a lift in sales as shoppers browse and buy more than usual.

Deal Days discounts will be widespread at Target, but it will have a special grocery-related promotion: It will hand out $10 gift cards to customers who spend $50 or more on food and beverages while using one of its same-day services like curbside pickup and home delivery service, Shipt. The company declined to share specific items that will be on sale.

At least two of Target’s competitors will dangle grocery deals, too: Walmart and Amazon. Walmart is also adding groceries for the first time to Deals for Days, its annual sale, according to a company spokesperson. It will cut prices on foods like ribs, watermelon, ice cream and coffee.

Amazon plans to sell some groceries for $1, and its wine brand, Cursive, will be on sale. Whole Foods will discount seasonal items like lemonade and Caprese pizza, a company spokesperson said.

If shoppers take advantage, those deals could help the companies go up against tough year-over-year comparisons. All three put up big growth numbers that will be difficult to match or beat — particularly in the grocery department, where consumers stockpiled items during the pandemic.

Target’s sales last fiscal year grew by more than $15 billion — more than its sales growth in the previous 11 years combined. The company said it gained about $9 billion in market share during the year, according to the company’s own and third-party research.

The company’s shares have risen nearly 31% so far this year, bringing its market value to nearly $114.05 billion.

By pairing up groceries and digital services, Target has also found it can drive customer loyalty.

On a fourth-quarter earnings call on March 2, Target’s Chief Financial Officer Michael Fiddelke said customers tended to visit its stores more, increase their food and beverage spending by 20% to 30% on average, and ring up more sales in other categories after they bought fresh or frozen food through curbside pickup or store pick-up for the first time.

A sign advertising Shipt, the same-day grocery delivery service owned by Target, is displayed on a frozen food display case at a Target Corp. store in Chicago, Illinois, U.S., on Saturday, Nov. 16, 2019.

The company has also shared that food and beverage drove 20% of its overall sales for the year, making the category the second largest sales driver after beauty and household essentials, which drove 26%. During the pandemic, the company launched a private brand of snacks and desserts and a collection of gourmet pastas, coffees and more.

So far, Target has been able to keep the growth going. In the first quarter, food and beverage grew in the low-to-mid single digits despite tough comparisons with the year-ago period when consumers were stocking up and sheltering in place.

Target will use grocery as a differentiator and “defense mechanism” on Amazon Prime Day, Krishnakumar Davey, president of strategic analytics at market research firm IRI. Over the past year, it has helped Target encourage bigger baskets and attract new customers, he explained.

Target has deepened its penetration among lower-income customers and older shoppers, according to IRI’s market research.

It is also driving store trips more than competitors over the past several months. As of early June, Target trips are up 16.1% year to date versus the same period a year ago. All other peers, except for Costco, are in the low single-digits, according to IRI, which collects consumer data from a representative sample of over 100,000 households.

Compared with Amazon, Target has a much larger grocery footprint, too. Amazon owns more than 500 Whole Foods stores and has about a dozen Amazon Fresh stores, its expanding grocery chain. Target has about 1,900 stores.

Dining out may be returning, but food consumption at home is still above pre-pandemic levels because of other factors like remote work, Davey said. Plus, he said, a sale on groceries may resonate more than other kinds of deals.

“Everybody needs something — more than an iPad or whatever,” he said. “It’s a high frequency item.”