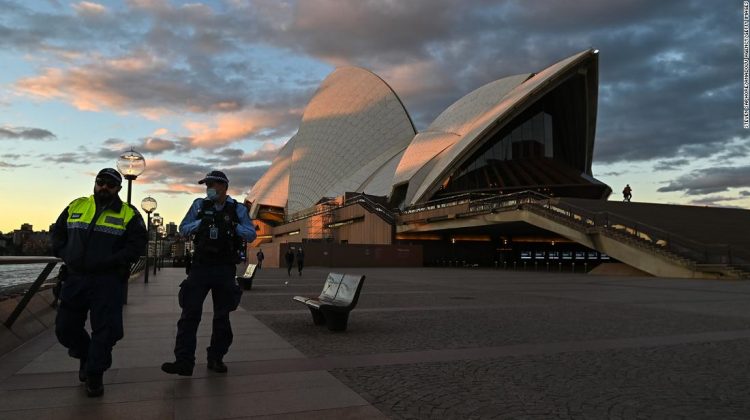 “Dear Customers, We will be closed for the foreseeable future because Scott Morrison is a useless dickhead who only ordered enough vaccine to vaccinate 4% of the population 18 months into a pandemic,” reads the sign, shared on Twitter, in reference to the Australian Prime Minister.

Australia was celebrated for its initial response to the Covid-19 pandemic, and for getting its economy more or less back on track long ago.

But with that security has come complacency, particularly in the federal government, which failed to secure enough vaccine doses to prevent the regular “circuit breaker” lockdowns that come every time a handful of cases emerge, or even the longer restrictions that Sydney is experiencing now. Australia’s borders, controlled by strict quarantine measures, have been all but shut for more than a year.

Now Australians, who basked in their early successes, are wondering how much longer this can go on.

“We can’t leave the country, people can’t come in, and we end up periodically in lockdowns, which cost a friggin’ fortune,” said Powditch.

“People have been accepting that this is a diabolically difficult situation, but once we start watching the rest of the world open up, we’re going to turn to anger over the way things like vaccines have been rolled out here.”

Already there are signs that Australians are getting weary of these sporadic disruptions to their lives. On Sunday, large crowds were seen on Bondi Beach, despite the stay-at-home orders. While outdoor exercise is allowed, images from Bondi showed people bathing in the winter sun and sitting on benches with drinks.

A 48-hour lockdown was also imposed in parts of Australia’s Northern Territory, including its capital, Darwin, after four Covid-19 cases were linked to a worker at a gold mine. He is believed to have become infected during an overnight stay at a quarantine hotel in Brisbane. Now painstaking efforts to trace all 900 workers who have left the mine for cities across Australia over recent days are under way, as the country relies heavily on a robust track-and-trace system to keep clusters contained.

Australia has recorded just 910 deaths in its population of 25 million, one of the lowest per capita death tolls in the developed world, and cases have remained low as well.

While it beat much of the world in getting its economy back up and running, its tourism sector has taken a massive hit, its universities are struggling without the fees international students usually bring and some Australians, who travel abroad in relatively high numbers, are starting to feel the itch to go on holidays overseas.

Even New Zealand — the only country with which Australians had an open travel corridor — announced a three-day suspension of quarantine-free travel between the nations starting Saturday because of the outbreaks.

Australia has fully vaccinated just over 4% of its population, compared with more than 46% in the US and 47% in the UK, according to Our World in Data. Its rates are more comparable with Indonesia and India, which, like much of the developing world, were left out of the agreements with pharmaceutical companies that secured hundreds of millions of vaccine doses for most of the rich world.

Compounding the problem is hesitancy towards Covid-19 vaccines in Australia. One survey by The Sydney Morning Herald and The Age, with research firm Resolve Strategic, found 15% of adults surveyed were “not at all likely” and 14% were “not very likely” to take a vaccination in the months ahead. The survey was taken after an April ruling that the Oxford-AstraZeneca vaccine was linked to a very rare blood disorder side effect, involving blood clots.
Australian officials have said they hope to reach herd immunity — the point at which about 80% of the population is vaccinated — before reopening its borders. Prime Minister Morrison earlier said that may not be until mid-2022. More recently, he was even unable to commit to a Christmas 2022 reopening.

In a question to the Prime Minister, journalists on Channel 9’s Today program on Thursday suggested that Morrison and his slow vaccine rollout were responsible for the ongoing lockdowns.

Morrison replied by saying an increase in supply “will really kick in next month in July,” and that 600,000 Pfizer doses were due in next week.

“The challenge we’ve had, of course, has been with AstraZeneca. I mean, the medical advice has restricted its availability to those over 60, and prior to that over 50. Now, that was a big shock to the rollout and they are events outside of the government’s control,” he said, adding there were new supply arrangements with AstraZeneca, Pfizer and Moderna.

“So, we’ll keep working towards that goal, by the end of the year, of offering that vaccine to everybody who would want one and there will be an escalating ramp-up as we move through the second half of the year,” he said.

Can’t get in, can’t get out

The government has also been criticized for leaving about 36,000 Australians stranded overseas. Caps on arrivals to the country have made booking seats on flights difficult and expensive, and the cost of quarantine is in the thousands of dollars. It’s the responsibility of the person arriving to foot the bill.

It’s just as hard for some living in Australia to get out. If someone from overseas has Australian citizenship or permanent residence, they need a government exemption to leave the country.

The result is not just holidays lost, but lost time with family and friends.

At the last census in 2016, around half the people living in Australia were either born abroad or had at least one parent born overseas.

One Brisbane resident from Canada, who is working in a hospital in health care, is hoping a speedier vaccine program will mean fewer border controls and, hopefully, a trip back home.

“I’m originally from Canada, and don’t know when I will see my family again. Honestly, I think at least 2 years,” the health care worker wrote in a message to CNN.

“We’re so frustrated! The vaccination process is ridiculous. I’m a health care worker in the top list of people and there was so much confusion. We were told to email and that we’d be contacted when our appointment was … then we’re told just to show up because that program was actually not recording anything,” she said.

“It’s still only open to [people age] 50+ even though spreaders are averaging 20-30 years of age. We’re sick of lockdowns, knowing the vaccine is out there.”

And for some residents with strong ties abroad, there are more serious implications to this global isolation.

Katerina Vavrinec, a 34-year-old from the Czech Republic living in Sydney, said she has sought counseling for mental health issues arising from the separation from her friends and family, and the anxiety that has come with it. She hasn’t been to her home city of Prague for three years.

Vavrinec is on maternity leave and due to return to work in just over a week, though she’s not sure what that will look like in lockdown. But she’s found a silver lining.

“I’m actually quite happy that we’re in lockdown because I’ve been quite frustrated with the indefinite border closures. So I’m hoping that the lockdown forces people to realize that completely isolating Australia from rest of the world is not going to get us out of this.”