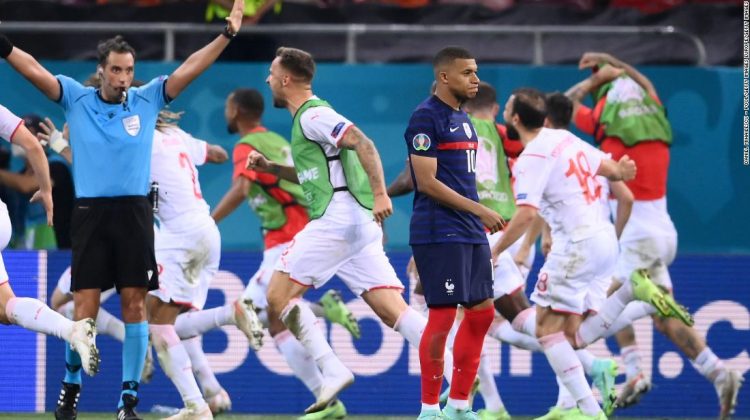 Kylian Mbappe, who endured a torrid night leading the line for France, capped a miserable evening by missing his team’s decisive fifth penalty, the only player not to score in the shootout.

It was scarcely believable the tie had even reached this stage, as Switzerland trailed 3-1 with less than 10 minutes of regulation time remaining.

France looked like it was cruising after Karim Benzema’s brace and Paul Pogba’s stunning long-range strike had canceled out Seferovic’s early header, with Switzerland’s Ricardo Rodriguez missing what looked like a crucial penalty in the second half.
In the end, it mattered little as Switzerland advanced to face Spain in Friday’s quarterfinal.

Missing two of his starting left backs through injury, Didier Deschamps opted for an untried and untested three-man defense.

It became immediately obvious that it wasn’t a system the French players felt comfortable with, as Switzerland looked to be advancing up the pitch with relative ease.

Though the talent on display in the Swiss starting lineup paled in comparison to their opponent’s, their desire and determination far exceeded France’s in the early proceedings.

That soon manifested itself in a surprise early goal, as Seferovic completely outmuscled Clement Lenglet in the box to brilliantly head home Steven Zuber’s cross.

France looked rattled and Mbappe, so often calm and composed, cut a particularly frustrated figure up front, his touch wayward as he received very little in the way of support.

The interval couldn’t come soon enough for France and Deschamps used the break as an opportunity to tweak his faltering system; off came Lenglet to be replaced by Kingsley Coman, with Adrien Rabiot slotting in as a makeshift left back.

Though France certainly looked more balanced, Switzerland continued to look threatening and had a glorious opportunity to seemingly seal a place in the quarterfinals.

Up stepped Ricardo Rodriguez, a nervous look etched across his face, and his tame effort was saved down low by France’s captain Hugo Lloris.

It looked to be the moment that changed this tie irrevocably, as Benzema scored two goal in two minutes, the first coming little more than a minute after Rodriguez’s botched penalty.

At this stage, France was finally looking like the unstoppable force many had predicted it would be at Euro 2020 and Pogba capped a fine individual performance with arguably the goal of the tournament so far.

His high, arcing shot started well outside the far post, before curling into the top corner, giving Yann Sommer absolutely no hope of saving it.

Pogba then went through his entire catalog of celebrations — it was certainly a goal deserving of more than one — including the ‘three to the dome’ and ‘ice in my veins’ celebrations made famous by NBA stars Carmelo Anthony and D’Angelo Russell.

Switzerland looked down and out, its players dejected and began putting in frustrated, reckless challenges. Certainly nobody would have predicted what happened next.

With just nine minutes remaining, Seferovic bagged his second header of the game, before Mario Gavranovic finished brilliantly past Lloris from the edge of the area in the 90th minute.

The late Swiss comeback mirrored that of Croatia’s against Spain earlier on Monday and this game, too, would be heading to extra-time.

Sommer was certainly the busier of the two goalkeepers in the early stages, saving brilliantly from Pavard who had got free at the far post.

There was still some attacking intent from both sets of players, but it now looked as though these two teams were resigned to this tie being decided by a penalty shootout, France’s first at a major tournament since defeat to Italy in the 2006 World Cup final.

This shootout would end badly, too, as Mbappe was the only player that failed to score. The Paris Saint-Germain scored in France’s World Cup final triumph three years ago and four goals in that tournament, but Euro 2020 has been one to forget for the forward, who failed to find the net in four games.

It capped a remarkable day of football in Euro 2020 that saw 14 goals over two incredible games, as Spain and Switzerland now face off for a place in the semifinals.