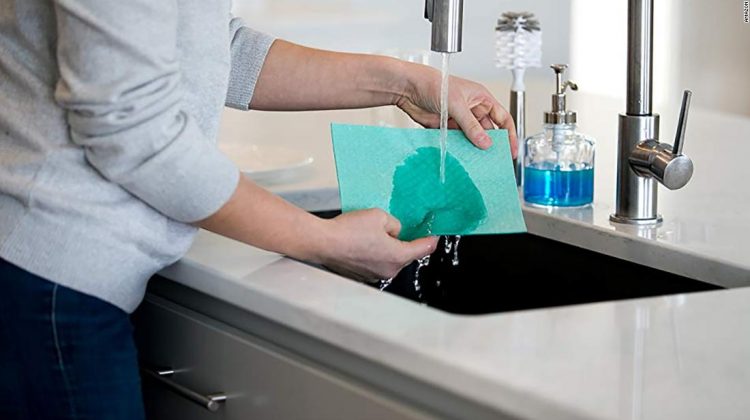 I’m just going to go ahead and admit it: I’m a paper towel addict. While I’ve managed to nip some of my previously eco-unfriendly habits in the bud — Stasher’s reusable silicone bags, for example, were my greatest discovery of 2019 — I am embarrassingly prone to ripping a select-a-size paper towel off the roll dozens of times a day. Whether I’m sweeping crumbs off my kitchen table or cleaning a red sauce explosion in the microwave, I turn to a paper towel 100% of the time.

Recently, however, I decided this needed to change. Not only is this consumption bad for the planet, it’s also bad for my monthly budget. My favorite Brawny 16-pack of paper towels, for instance, costs a whopping $30.99 (it’s on sale for $26.46 now). In my quest to find a more sustainable solution, I discovered the Swedish dishcloth.

Nab this bulk pack of 10 and replace your paper towels forever.

Boasting nearly 23,000 positive reviews and a 4.6-star rating on Amazon, the 10-pack is on sale for $19.95, originally $24.99, and is currently trending because of the aforementioned reasons that a) paper towels are wasteful and bad for the environment and b) paper towels are expensive! Are you ready for a fun fact? One Swedish dishcloth can actually replace 17 rolls of paper towels. Let that sink in, folks.

Here’s the backstory: Invented by a Swedish engineer in 1949, the dishcloths are reusable, biodegradable and ultra affordable, not to mention highly effective. As a result, they’re widely used throughout Scandinavian countries like Sweden, Finland, Norway, Denmark and Iceland, which happen to also be the world’s most eco-friendly countries. Point being: You’ll be hard-pressed to find a roll of paper towels in any Nordic homes or businesses, as they’re all relying on Swedish dishcloths instead.

Sustainability aside, the cloths have loads of additional selling points that are attracting tons of fans here in the US. Comprised of renewable and natural fibers, specifically 70% cellulose and 30% cotton, the dishcloths air-dry much more quickly than, say, the stinky sponges that we Americans grew up using. Because of this, germs and bacteria (and their accompanying odors) don’t have time to grow on them — and if they do happen to start smelling gross, simply toss them in the dishwasher or washing machine and they’ll be good as new after one cycle. Yes, really. You can reuse each individual cloth hundreds of times before throwing it out, and fear not — they won’t sit in a landfill later on, because they’re biodegradable too.

While I assumed I’d be using my set of cloths primarily in my kitchen, turns out they’re way more versatile than I expected. You can use the cloths to wash your car, for instance. Or take off nail polish (just add remover, and voilà!). Or dry your pets’ paws. Or clean your mirrors and windows (lint-free and streak-free!). I have one designated for wiping my four kids’ messy faces and sticky hands. I keep another in their bathroom for a nightly counter/sink toothpaste cleanse. Given that the cloths are safe on surfaces like wood, marble, tile, stainless steel and, yes, even on human skin, suddenly they’re replacing not just paper towels but also napkins, sponges and your perpetually damp dish towels.

There’s also the fact that the dishcloths are wildly absorbent. The brand actually has a highly watchable video of one cloth soaking up an entire cup of liquid (fast forward to 0:35 to catch it). This benefit didn’t mean much to me — until I remembered the countless amounts of times I’ve used dozens of paper towels to clean up one spilled cup of milk. So. Much. Waste.

One only has to turn to the Amazon reviewers for even more reasons to give Swedish dishcloths a try. “Much better than all cotton dishcloths because they are VERY absorbent yet easy to wring out completely (and I mean completely!) after use,” writes one Amazon reviewer. Another says: “I rarely write reviews, but these deserve a shout-out. SO much more substantial than Handi Wipes and you can really scrub with them, but they never feel yucky like a sponge does. I’ve used the same two for a month now and they still look great.”

The dishcloths are available in three color options — the white hue will perfectly match the all-white kitchens that are de rigueur right now, while the yellow and multi-color pack (which isn’t shipping until August right now) would add a fun pop of color to a serene space — and given their stiff nature when dry coupled with their 3D diamond-shaped texture, they can also be used to scrub tough residue from pots, pans and more.

Having used the dishcloths for several weeks now, I can attest that my paper towel consumption is way down. But more importantly, my peace of mind is way up. I love knowing that by reusing them day in and day out, I’m drastically cutting down on my household’s annual waste generation. We’ll never be a zero-waste family, but the Swedish dishcloth is proof that a little change can go a long way.