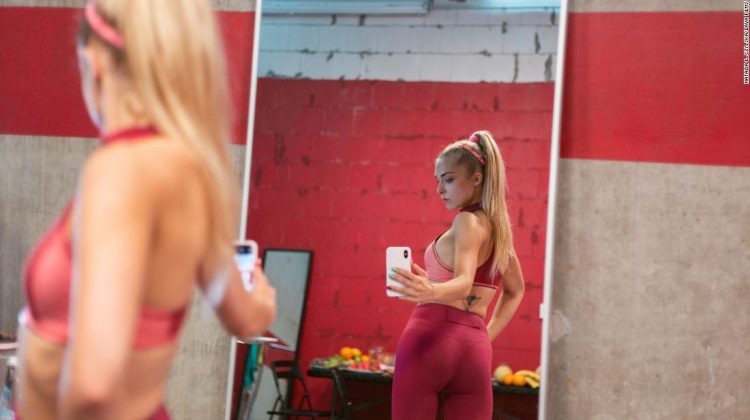 Keeping you in the know, Culture Queue is an ongoing series of recommendations for timely books to read, films to watch and podcasts and music to listen to.

Sylwia is constantly being watched — first by her 600,000 Instagram followers, then by a man parked outside her apartment.

If you are fascinated by the landscape of internet celebrity and what lurks beneath, the Polish thriller “SWEAT” — part of the official selection at Cannes Film Festival 2020 — should leave you reeling.

Out in theaters and available on arthouse streaming service MUBI this month, the film takes a time-honored trope about the pitfalls of fame — loneliness, crumbling interpersonal relationships, a desperate need for validation — and modernizes it through the lens of social media influencing.

The film follows Instagram-famous fitness guru Sylwia, played by Magdalena Koleśnik, as she moves through her daily influencer duties, wearing a seemingly endless rotation of hot pink athleisure. From opening mountains of free publicity packages to live-streaming the creation of her favorite protein smoothie, almost every mundane second of Sylwia’s life is broadcast to her army of fans.

“Emotional exhibitionists fascinate me, probably because I am on the opposite side of that spectrum,” said screenwriter and director Magnus von Horn in a statement.

“I couldn’t stop watching fitness motivators and the way they made their lives into reality shows,” he said in a recorded interview with MUBI. “I felt like I got to know them on some level because they shared so much of their everyday life. Twenty videos of a dog playing with a rubber toy and then an emotional speech about love problems. That’s why I watched them. It was provocative, I both hated and loved them.”

When she inevitably shares too much, Sylwia is brutally reminded that online actions can have real-world consequences. A vulnerable recording of Sylwia crying gives her devoted supporters a false sense of intimacy and, when one obsessive fan tracks down where she lives, compromises her safety. There is no screen to hide behind and she is forced to confront the danger of these parasocial relationships head-on.

The show must go on

Much like influencing, the world of fitness is high energy. When we first meet Sylwia, she is hosting a dynamic in-person workout session for a crowd that has congregated at the mall. Headset microphone on, with sweat pouring from under her blonde ponytail, Sylwia is like a televangelist feeding off the audience, chanting superlatives and at times reaching a state of attention-induced ecstasy.

But after every scene that shows Sylwia’s seemingly inexhaustible online personality, we’re met with the deafening silence that follows once the camera is off — or the eerie sound of her recorded voice echoing through her empty apartment. The illusion Sylwia’s career hinges on — impenetrable self-esteem, a self-assured, sunny disposition — is repeatedly created and destroyed before our eyes as we watch her in private, yearning for human connection.

Would she be happier without her platform? The question goes unanswered. “As Sylwia got stronger I also stopped feeling the need to make a statement.” Von Horn said. “Is it a film that criticises social media or not? I never wanted a clear stance.”

Sylwia’s life is designed to be seen, from the sculpted body that furthers her fitness empire to the grand apartment that helps facilitate brand deals. And anyway, as her old classmate says bleakly during a brief encounter, “What’s the point if you can’t share it?”

“SWEAT” opens in New York’s Quad Cinema June 18 and in Los Angeles on June 25 at the Laemmle NoHo 7 and Lumiere. It is available to watch on MUBI from June 23.

Add to Queue: Welcome to the internet

Created in isolation during the pandemic with little more than a camera and some editing software, Burnham’s comedy special digs deep into the mounting pressure that comes with existing online. The special feels like a thematic continuation of his 2018 directorial debut “Eighth Grade,” which follows an introverted middle-schooler whose dreams of becoming a YouTuber appear at odds with her personality.

Set in Los Angeles, this HBO documentary follows a social experiment in which three wannabe influencers race to build a lucrative social media career through fake followers and plenty of contrived photo staging.

The debut novel by American poet Patricia Lockwood is a fragmented recounting of life as a Twitter personality. In her prose — an Easter egg hunt of digital culture slang and meme references — Lockwood blurs the boundaries between tweets and thoughts, emphasizing the indelible mark online life has left on the human psyche.

Journalist Moya Lothian-McLean sits down with Novara Media political editor Ash Sarkar to discuss the meteoric rise of the influencer and how this new form of celebrity is affecting wider society, from advertising to activism.

In this social media satire film, Aubrey Plaza plays Ingrid, an obsessive stalker who has successfully infiltrated the ranks of her favorite influencer. After being released from a psychiatric ward, Ingrid uses her inheritance to move to the modern-day promised land of Los Angeles in the hopes of pursuing Taylor, an internet celebrity played by Elizabeth Olsen.

Top image: A movie still from “SWEAT,” courtesy of MUBI.