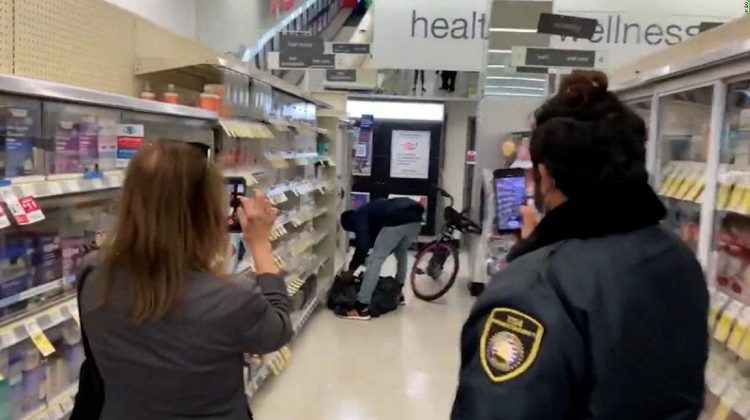 The videotaped shoplifting was a stark example of what chain drug stores and local officials said was a broader, persistent problem in the city.

Jean Lugo-Romero, 40, was arrested just after 8:30 a.m. Saturday at a drug store on the 400 block of Haight Street in San Francisco, police said in a statement on Twitter. Police did not identify the store, but a CVS sits on the block.

Officers with the SFPD Northern Station Street Crimes Unit saw Lugo-Romero enter the store and found him “clearing shelves of cosmetics and placing the merchandise into a duffel bag,” police said. He was taken into custody without incident. The merchandise was valued at about $978, SFPD said.

For Saturday’s incident, Lugo-Romero was booked into the San Francisco County Jail on charges of attempted grand theft; entering a business with the intent to commit theft, loss under $950; possession of narcotics paraphernalia; and a warrant for failure to appear on a prior theft case, according to police.

SFPD said they had already been looking for Lugo-Romero, who was suspected of committing thefts from merchants in the Northern and Mission Districts. Police described him in a tweet as a “prolific retail theft suspect.”
In particular, police said Lugo-Romero was the man in last week’s viral video, captured by a reporter for CNN affiliate KGO, that shows a suspected shoplifter taking items from a Walgreens and putting them into a black garbage bag.

The theft continued even as three people, including the store’s security guard, began filming on their cell phones just feet away. The suspect then put the bag of items on his bike and rode toward the guard, who attempted to grab at the bag but allowed him to pass. The shoplifter then left the store with the bag on the bike, the video shows. No one was injured.

For that incident, Lugo-Romero was booked on charges of second-degree burglary, grand theft, two counts of entering a business with intent to commit theft, loss under $950, and two counts of petty theft, according to police.

In addition, he was booked on three counts of robbery and one count of burglary for incidents at that same Walgreens on May 29, May 30, May 31 and June 1, police said. He further was booked on charges for entering a business with intent to commit theft, loss under $950, and petty theft for an incident last Thursday at the 400 Haight Street business.

According to county booking information, Lugo-Romero has a $2,500 bond for a total of 16 charges and is still in custody. A court date has not yet been set, according to the public defender’s office. CNN is seeking more information from the district attorney’s office.

Local officials trying to crack down on organized retail crime

Last month, San Francisco Board of Supervisors member Ahsha Safai held a hearing to discuss the city’s shoplifting problem, and retailers including Walgreens and CVS spoke up about the issue.

“This has been out of control,” Safai said at the hearing. “People are scared to go into these stores: seniors, people with disabilities, children. And it’s just happening brazenly. We can’t just as a city throw up our hands and say this is OK.”

Authorities have positioned these thefts as organized crimes rather than spur-of-the-moment incidents.

“Unfortunately, this is another example of blatant retail theft which is an ongoing problem for several retailers in San Francisco,” Walgreens spokesman Phil Caruso said in an email last week, referring to the theft caught on video.

Last October, for example, five people were arrested for allegedly buying stolen goods and reselling them in an investigation that seized and recovered about $8 million in stolen merchandise from retailers across the region, according to the California Attorney General’s Office.
“These items that are being taken — there’s definitely an illegal after-market,” Lt. Scott Ryan told KGO. “There’s definitely an organized effort in order to get these items and sell them and fence them throughout the city, and the state as well as the nation.”
Despite the shoplifting concerns, data from the San Francisco Police Department shows there has actually been a decline in total crime so far in 2021. Property crimes in San Francisco are down 6.8% so far this year compared to this point last year, and larceny theft, a category of crime that includes shoplifting, is down 12.6% compared to last year, according to SFPD data.

Still, the vast majority of larceny theft cases are not solved. SFPD data shows just 2.8% of these crimes so far this year have been cleared.

CNN’s Stella Chan and Cheri Mossburg contributed to this report.