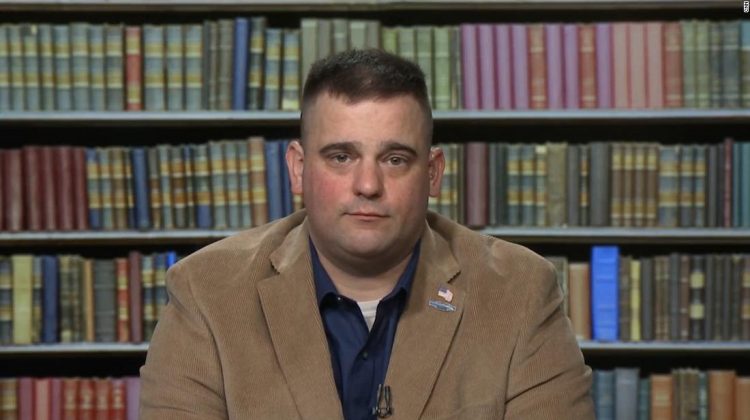 And today he’s having what he calls a good day.

“I could be dead tomorrow. I could live another six months … It really all just depends on how my body responds to the oral chemotherapy, how much more I can squeeze out of the stone,” Black told CNN in an interview in his home on Thursday.

Black has terminal colon cancer that has spread throughout his body. He survived two combat deployments to Iraq and Afghanistan with the Vermont National Guard and received numerous honors, including a Purple Heart.

But it’s the smoldering trash from the massive burn pits on US military bases — sometimes acres in size — that will soon kill him.

“Soldiers tend to generate a lot of trash,” Black told CNN. “Metals, plastics, electronics, medical waste, your uniform — anything and everything that could be burned was thrown in the trash dump and then coated in diesel fuel and lit on fire.”

In Ramadi, Iraq, where Black served, he says the burn pit was several football fields in length. And at the remote combat outpost where he served in eastern Afghanistan, Black recalls how the burn pit was located just 150 feet from the front gate.

“If you were the poor sucker standing gate guard when that burn pit was lit and the wind was blowing toward the main gate, you’d be standing in the smoke for upwards of eight to 12 hours a day.”

Thousands of American service members have inhaled the carcinogenic haze of burn pit smoke just as he did.

A recent survey by Iraq and Afghanistan Veterans of America found that 86% of veterans from the two conflicts reported being exposed to the toxic fumes of burn pits. And 88% of those exposed said they were experiencing symptoms that could be related.

The VA acknowledges on their site that waste products disposed of in open burn pits include chemicals, paint, medical and human waste, along with things like munitions and petroleum products.

When Black medically retired in 2015 after being thrown from a Humvee in a roadside bomb attack, he thought he had survived the Iraq and Afghanistan wars.

“I thought I was on Easy Street. I was ready to chase my wife and son around for the rest of my life. Life was good,” Black said.

Then the pain and severe digestive issues began.

Black says he complained of serious symptoms to Veterans Affairs providers for years. But he says his cancer went undetected until 2017.

The diagnosis was stage four colon cancer, a death sentence.

When Black learned he would die, he had a new baby boy. He and his wife had just bought a home with a treehouse out front in a quiet Vermont town. He was beginning a career as a firefighter.

This past spring, in the late stages of his illness, Black retired from the fire department.

But when his former coworkers drive the engine by his house, they turn on the lights and sirens, one local volunteer firefighter told CNN.

Now Black and his wife are planning a funeral, visiting the local funeral home to pick out his coffin.

The wife, per usual, won out.

As Black sought answers after his diagnosis, an oncologist outside the VA system linked his rare cancer to burn pit exposure.

The VA then granted Black 100% disability coverage for his service-related illness. It was a win. Twenty percent of burn pit-related claims filed have been granted, according to data provided by the VA.

It means the military will now pay for his funeral and the sleek silver coffin with an American flag draped over the top.

As the post 9/11 wars come to an end in the coming months, burn pits and exposure to other toxins threaten to kill many more veterans than fighting in the wars did.

And the White House is acutely aware of the problem.

President Joe Biden, as a candidate, said he believes burn pits may have killed his beloved son Beau, who died of cancer in 2015.

“He volunteered to join the National Guard at age 32 because he thought he had an obligation to go,” Biden told a Service Employees International Union convention in 2019. “And because of exposure to burn pits, in my view — I can’t prove it yet — he came back with stage four glioblastoma.”

Biden repeated this message on several campaign stops, vowing to vigorously research the long-term effects of burn pit exposure while noting that he “can’t prove it yet.”

But burn pits have been on the legislative radar of the past two presidents, including bills signed into law that expand the data on exposure.

In 2013, then-President Barack Obama signed the burn pit registry into law, so that the VA could gather data on veterans’ exposure to burn pits — even if they weren’t experiencing health issues at the time. High traffic plagued the launch of the registry and continually disrupted the early years of its service.

In 2019, then-President Donald Trump signed a law that, in part, will phase out burn pits and require the Department of Defense to pinpoint where they have been used, so that information can be cross referenced with where sick veterans served.

The VA says the Department of Defense has shut down most burn pits at this point and is planning to close the remainder.

But the VA website in March 2020, under Trump, officially denied that burn pit exposure was harmful: “At this time, research does not show evidence of long-term health problems from exposure to burn pits.”

Today, the VA website acknowledges the issue is being studied and that those exposed “may be at greater risk for longer-term health conditions.”

In an email to CNN on Sunday, Veterans Affairs press secretary Terrence Hayes wrote: “VA is fully committed and leaning forward in this effort and working alongside Congress … and all other available scientific sources to deliver on the President’s promise to provide the world-class health care and access to benefits Veterans need, and quite frankly deserve.”

Hayes urged veterans exposed to sign up for the burn pit registry and those feeling ill due to a possible toxic exposure to submit a claim.

“The more veterans who do so only helps us gather the information and research needed to provide the care they require.”

“They’re not doing enough. That’s the long and short of it. There needs to be a set process to identify these issues and to follow up on these issues,” Black told CNN. “If [the cancer] had been caught earlier, my survivability rate would’ve been higher.”

Unable to save himself, Black is sounding the alarm for other veterans while pushing for additional screening of burn pit exposure and more proactive monitoring and treatment from VA providers.

“I’m kind of like the canary in the coal mine screaming my head off trying to raise awareness,” he told CNN. “It’s too late for me. But it’s not too late for the next veteran who walks down the hall of the VA and goes in and complains about the signs and symptoms.”

On his bad days, when it’s hard to get out of bed, Black thinks of his wife and their five-year-old son. He uses the strength he can muster to run around and play, if only for a few minutes, in the hopes that his son will remember these moments.

He spoke of fighting for them and cried.

“I’m just a dumb Irish kid from Boston. All I know how to do is fight, you know,” Black said. “Cancer’s gonna win, but it’s gonna be one hell of a war of attrition.”