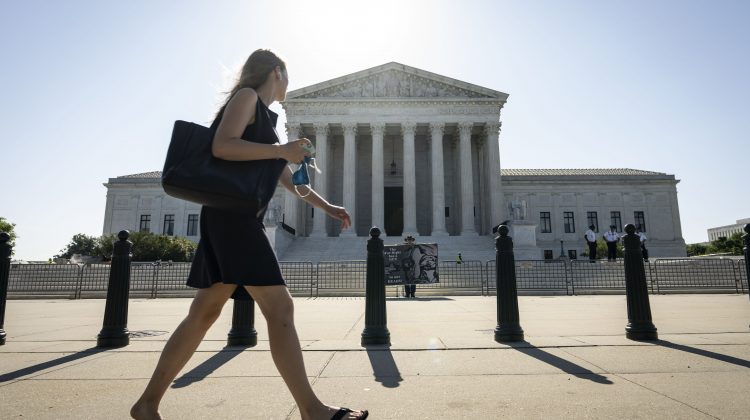 The Supreme Court term is coming to an end.

On Thursday morning, the justices are set to hand down the last opinions of their current session. After a flurry of rulings were issued in recent days, only two cases are left to be decided: A pair of closely watched disputes over the Voting Rights Act and California’s nonprofit donor disclosure rules.

In typical years, the court often decides the most high-profile cases when the term ends in late June or July. This year, the most notable rulings — including in cases over Obamacare and LGBT rights — were handed down a few weeks earlier.

The end of the term marks a close to one of the most transformative Supreme Court terms in memory. That’s because it was the first to take place after the death of the liberal Justice Ruth Bader Ginsburg, and her succession by the conservative Justice Amy Coney Barrett, appointed by former President Donald Trump.

Despite that change in membership, though — or perhaps as a result of it — the court’s docket was relatively muted. The court’s lack of major decisions featuring its new 6-3 conservative majority came amid calls from some Democrats to expand the bench or otherwise overhaul the judicial body.

Democrats had warned that Barrett’s confirmation to the bench would spell doom for both Obamacare and the court’s reproductive rights precedents, including Roe v. Wade. In her first term, neither of those outcomes came to pass, though. The court preserved the health-care legislation and did not weigh in on abortion.

Next term, however, is expected to be more explosive, as the court has already agreed to hear a an abortion case that seems teed up to roll back Roe’s protections, in addition to a major Second Amendment battle over open carry laws. The court will start hearing arguments again in October, with decisions expected until around late June of 2022.

One area where Barrett’s addition to the bench did seem to sway the law was with regard to Covid-19 regulations on religious groups.

While the court, with Ginsburg, largely approved state-imposed restrictions on religious gatherings that were challenged at the top court, that came to an end once Barrett was sworn in. In November, Barrett formed part of a 5-4 majority striking down rules in New York that limited attendance at religious gatherings. The court’s three Democratic appointees and Chief Justice John Roberts, a conservative, dissented in that case.

One of the two outstanding decisions remaining involves a Democratic challenge to two voting laws in Arizona. A ruling in the case could effectively curtail the reach of the Voting Rights Act, which the court already watered down in the 2013 case Shelby County v. Holder.

The dispute is over Arizona rules that ban out-of-precinct voting as well as third-party ballot collection, which critics call ballot harvesting. The Democratic National Committee challenged the laws in 2016 on the basis that they disproportionately impacted minority voters, allegedly in violation of Section 2 the Voting Rights Act, which requires elections to be “equally open” to those of all races.

In the Shelby County case, the top court ended the longstanding requirement that certain localities with histories of racist voter suppression receive federal clearance before implementing new election laws. Voting rights activists and Democrats have said that the Shelby County decision has made Section 2 of the Voting Rights Act even more important, as it is one of the few remaining avenues for ensuring that minorities aren’t excluded from the polls.

Republicans, including Arizona Attorney General Mark Brnovich, have said that they are defending sensible election rules that exist in dozens of states. Brnovich has warned that striking down Arizona’s laws could undermine public trust in elections.

Brnovich won at the district court level but the DNC managed to overturn that ruling at the 9th U.S. Circuit Court of Appeals.

The other case expected to be resolved on Thursday involves a rule in California that requires nonprofit groups to disclose certain donors to the state attorney general’s office.

Two conservative groups, the Americans for Prosperity Foundation and the Thomas More Legal Center, challenged the rule on the basis that it violated their First Amendment rights. While the disclosure forms are supposed to be confidential, the groups cited an instance in which 1,800 were leaked online, and argued that such mishaps meant their donors could be subject to harassment, boycotting or violence.

On the other hand, California has argued that the disclosure requirement is necessary for regulating nonprofits. Xavier Becerra, now the Biden administration’s secretary of health and human services, wrote in a brief submitted while he was California’s attorney general that relying on subpoenas or other methods of obtaining donor information “would compromise the State’s ability to effectively protect the public.”

A district court sided with the nonprofits, but that decision was reversed by the 9th Circuit.

The case also features a controversy over Barrett. In April, three Democratic senators called on the former law school professor to recuse herself from the case, citing Americans for Prosperity’s push to confirm Barrett to the Supreme Court. The group claimed to spend seven figures on its Barrett campaign. Barrett has not said she will recuse herself and is expected to cast a vote.