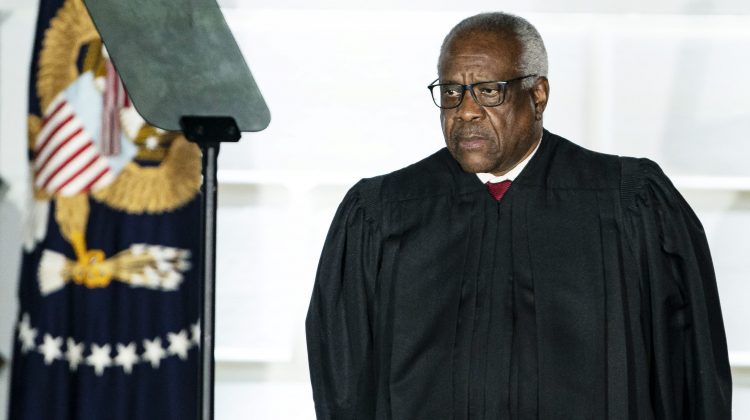 Clarence Thomas, associate justice of the U.S. Supreme Court, listens during a ceremony on the South Lawn of the White House in Washington, D.C., U.S., on Monday, Oct. 26, 2020.

Supreme Court Justice Clarence Thomas on Monday said that federal laws against the sale and cultivation of marijuana are inconsistent, making a national prohibition unnecessary.

“A prohibition on interstate use or cultivation of marijuana may no longer be necessary or proper to support the federal government’s piecemeal approach,” Thomas, one of the court’s most conservative justices, wrote in a statement.

The court’s decision not to hear a new case related to tax deductions claimed by a Colorado medical marijuana dispensary prompted Thomas to issue a statement that more broadly addressed federal marijuana laws.

Thomas stated that a 2005 ruling in Gonzales v. Raich in particular, which determined that the federal government could enforce prohibition against marijuana possession, may be outdated.

“Federal policies of the past 16 years have greatly undermined its reasoning,” Thomas said in the statement. “The federal government’s current approach is a half-in, half-out regime that simultaneously tolerates and forbids local use of marijuana.”

Thomas referred to several policies that conflict with the 2005 ruling. Among them are memorandums issued by the Department of Justice in 2009 and 2013 that indicated the government would not intrude on state marijuana legalization schemes or prosecute individuals for marijuana-activity if it complies with state law.

He added that since 2015, Congress has repeatedly prohibited the Department of Justice from using federal money to interfere in the implementation of state medical marijuana laws.

“Given all these developments, one can certainly understand why an ordinary person might think that the Federal Government has retreated from its once-absolute ban on marijuana,” he wrote.

With thirty-six states permitting the use of medical marijuana and 18 allowing recreational use, Thomas asserted that marijuana businesses do not experience “equal treatment” under the law.

The issue at hand is a provision of a Tax Code that prohibits businesses that deal in marijuana and other controlled substances from deducting their business expenses. The IRS cracks down on marijuana businesses, such as the Colorado medical marijuana dispensary, by pursuing investigations on their tax deductions.

“Under this rule, a business that is still in the red after it pays its workers and keeps the lights on might nonetheless owe substantial federal income tax,” Thomas wrote.

The justice also noted a consequence of federal marijuana prohibition, stating that most marijuana businesses fully operate in cash because of restrictions that prevent federally-backed financial institutions from providing bank services to marijuana businesses. This makes those businesses more vulnerable to burglaries and robberies, according to Thomas.

All of these issues regarding federal marijuana laws, Thomas argues, threaten the principles of federalism.

“If the Government is now content to allow States to act ‘as laboratories, then it might no longer have authority to intrude on ‘[t]he States’ core police powers . . . to define criminal law and to protect the health, safety, and welfare of their citizens,'” Thomas said.

Legal experts such as Joseph Bondy, a cannabis law expert sitting on the board of the National Organization for the Reform of Marijuana Laws, agreed with the justice’s statement and predicted that arguments about federal marijuana laws being unfair will continue to be made in the future, Law & Crime reported Monday.

While Bondy noted that Thomas’ statement may not have an actual legal impact, he told Law & Crime that it still “sends a message that will perhaps soften the views of some of the people in Congress,” including “some of our Republican senators.”