Rishi Sunak has hired his old friend James Forsyth, a senior journalist at the Spectator magazine, in a key role as his political secretary.

Forsyth, the Spectator’s political editor, has strong connections across the Conservative party and will be charged with trying to strengthen links between Number 10 and Tory MPs.

The role, which also includes heading off potential clashes between Downing Street and MPs on policy issues, will be important as Sunak tries to hold his party together ahead of the next general election.

Although Sunak has stabilised the government following the disastrous 44-day premiership of Liz Truss, the UK prime minister faces numerous challenges in 2023.

The country is facing a wave of strikes and is heading into a recession, while the Conservatives are trailing Labour by more than 20 points in opinion polls.

Forsyth will be alive to the prospect that Boris Johnson, a former Spectator editor, might try to make a comeback, especially if the Tories fare badly in May’s local elections.

Downing Street confirmed that Forsyth would begin his role in the new year. “He will have the usual political secretary remit,” a Sunak spokesman said. Political secretaries typically handle party management and try to spot possible rebellions over future policy. 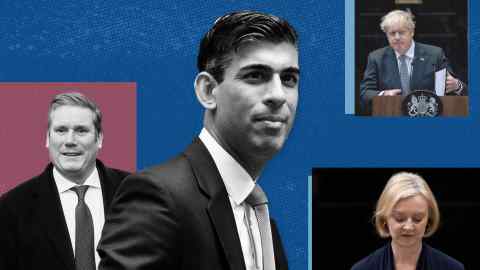 An early test will be over strikes in the public sector, notably the NHS, with some Tory MPs calling for Sunak to give ground and increase this year’s pay offer to nurses and paramedics.

Public opinion is firmly behind the striking NHS workers, according to opinion polls, and Sunak has in the past abandoned entrenched positions when they became politically too tough to maintain.

During his time as chancellor, Sunak opposed introducing a windfall tax on energy companies before eventually bowing to political pressure to do so. He also extended the free school meal provision after a campaign by Marcus Rashford, the England footballer.

Forsyth, whose wife Allegra Stratton worked as Johnson’s press secretary before resigning during the partygate affair, will be charged with spotting political traps before his boss walks into them.

Sunak, who is spending a short Christmas break with his family at his home in North Yorkshire, spent Friday visiting a homeless shelter in London — a trip described as “excruciating” by Labour’s deputy leader Angela Rayner.

The prime minister dished out cooked breakfasts at the shelter, run by The Passage, and was filmed engaging in an awkward conversation with a man called Dean.

When Dean said that sorting out the economy would be good for business, the prime minister asked: “Do you have . . . do you work in business?” Dean replied: “No, I’m homeless. I am actually a homeless person. But I am interested in business.”

Sunak then engaged him in a lengthy conversation about Britain’s financial services industry.