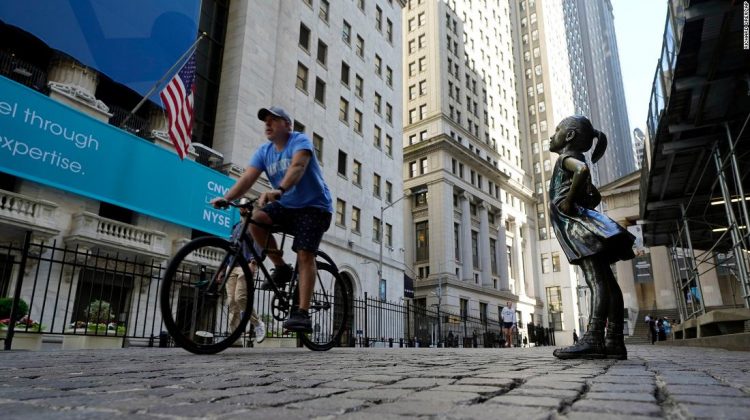 That’s been a huge boon to investment bankers, who are gearing up for another summer of juggling dealmaking with vacations.

What’s happening: The US market for initial public offerings has been on fire this year, setting post-2000 records in the first and second quarters, according to Renaissance Capital. In the April to June period alone, there were 113 IPOs raising nearly $40 billion.

“It was the busiest quarter for IPOs in over two decades, a record that was just broken last quarter, as well as the biggest second quarter by proceeds ever,” the group wrote in a report published Friday.

The scale: Globally, IPOs have raised almost $312 billion year-to-date, with 1,314 companies hitting public markets, according to data from Dealogic provided to CNN Business.

Some high-profile names are due to follow suit shortly, as they look to take advantage of a moment when investors are flush with cash.

Didi, China’s giant ride-hailing company, is gearing up to list 288 million American depositary shares on the New York Stock Exchange for between $13 and $14 each, raising roughly $4 billion.
Trading app Robinhood has also filed for an IPO and is expected to make a splash when it hits markets in July, buoyed by the explosion in retail investing.

Mergers and acquisitions are going strong, too, as companies gear up for the post-pandemic period. So far in 2021, there have been more than 15,500 tie-ups worth $2.9 trillion, per Dealogic — a record for the first six months of a year.

“As economies around the world begin to recover thanks to the successful development of multiple Covid-19 vaccines, companies have increasingly turned to M&A to prepare for a post-Covid world,” JPMorgan said in its most recent update for clients.

The bank pointed out that 2021 has seen a sizable number of mega-deals worth at least $10 billion, including Discovery’s huge merger with CNN parent WarnerMedia.

The pipeline is expected to hold up heading into the second half of the year. While cash remains the “dominant” method of financing deals, according to JPMorgan, firms are increasingly eying stock purchases as valuations soar. Debt also remains incredibly cheap as central banks maintain crisis-era policies.

Fun fact: Things are so crazy on Wall Street right now that banks are experiencing a shortage of analysts. Some senior bankers have had to take on more junior tasks while their companies try to staff up, said Kevin Mahoney, who leads the investment banking practice at search firm Bay Street Advisors in New York.

“With [interest] rates being where they are, the opportunity in the markets has been fantastic,” Mahoney said. “There’s just a lot of activity that banks quite frankly weren’t prepared for.”

Watching for rising wages in the US jobs report

The latest US jobs report, due Friday, is set to be another blockbuster.

Coming up: Economists surveyed by Refinitiv predict that the US economy will have added 675,000 jobs in June, up from 559,000 in May. That would send the unemployment rate down to 5.6%.

But Wall Street won’t only be focused on the headline jobs number.

In May, average hourly earnings rose by 15 cents to $30.33 as companies tried to get employees in the door to fill open positions. Wages are expected to have risen again in June to $31.54 per hour.

Policymakers are closely watching wages while they monitor the economy for signs of unhealthy inflation. Investors are banking that upward pressure on wages will remain relatively muted, helping offset gains in the price of raw materials and other goods and services driven by a spike in demand and snarled supply chains.

In a speech last week, New York Fed President John Williams indicated that he’s looking past the turmoil in the labor market, which he expects will ease in due course.

“We won’t see all the vacancies filled overnight — it takes time for employers to fill open positions,” Williams said. “With the strong, sustained demand for workers and progress on hiring, I am confident that we will see continued strong job gains going forward.”