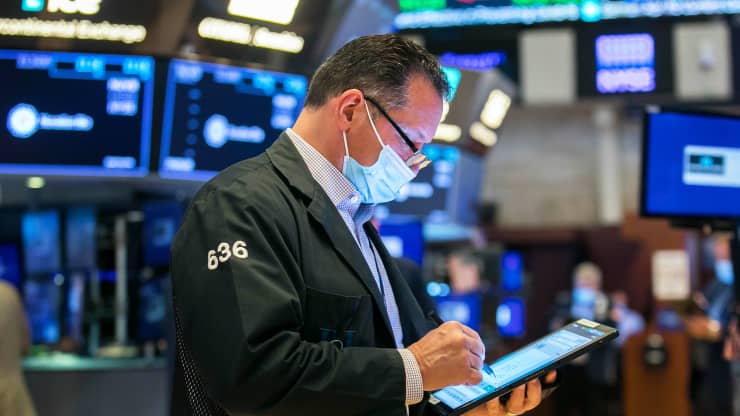 The major averages slipped on Friday as investors took profits amid a flurry of earnings results and a robust profit beat from e-commerce giant Amazon.

Despite Friday’s weakness in equities, the S&P 500 notched its third straight month of gains in April, adding more than 5% to the index as investors bet on a big economic and profit recovery from the pandemic. The S&P 500 is now up 11% for the year. The benchmark closed at record levels on Thursday on the heels of blowout earnings results from Apple and Facebook.

The Dow rose about 2.7% this month, while the Nasdaq Composite gained 5.4% in April.

Amazon, the last of Wall Street’s mega-cap tech companies to publish results, reported a record first-quarter profit. The Seattle-based firm said profits more than tripled to $8.1 billion and January-to-March sales soared 44% to $108 billion. The results blew past Wall Street’s expectations with the company earning $15.79 per share vs. the consensus estimate of $9.54.

Amazon’s results showed demand remained strong for its massive online retail business even as the economy started to open up some. Still, Amazon shares, up 40% in 12 months, closed in the red on Friday.

Apple came under some slight pressure after the European Union said the company’s App Store was breaching its competition rules. The shares dropped 1.5%.