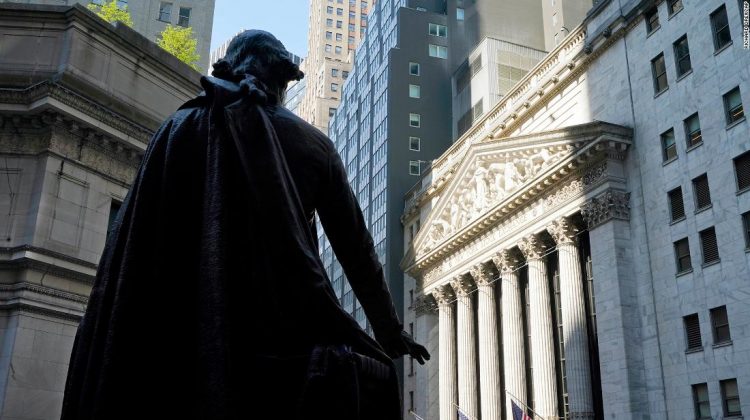 The Dow fell more than 500 points in late morning trading Friday, a drop of around 1.5%. It was a broad-based selloff, with 28 of the 30 Dow stocks in the red. Salesforce (CRM) and Microsoft (MSFT) were the only winners, while Intel (INTC), Goldman Sachs (GS) and Walgreens (WBA) posted the biggest drops.

The Dow is now on pace for its fifth straight day of losses, falling more than 3% this week.

Bullard, who does not have a say on the Fed’s policy committee this year but will have a vote in 2022, also said in the interview that the Fed is also starting to discuss the idea of tapering, or cutting back, its bond purchases.
Wall Street is worried about inflation. But investors are also nervous about the Fed taking away the stimulus it injected into the market during the height of the Covid-19 pandemic.

“There is more future volatility ahead,” said Bruce Monrad, portfolio manager of Northeast Investors Trust. “It should increase as the Fed starts to think about raising rates and once it starts tapering.”

These market gyrations could become more routine, which may alarm investors who have gotten used to more calm on Wall Street.

It’s actually been an unusually quiet first half of 2021 — despite the craziness with meme stocks like AMC (AMC) and GameStop (GME) and the big moves in bitcoin (XBT) and other cryptocurrencies.
If you look at the broader stock market, and the VIX (VIX) volatility index in particular, 2021 has been serene for investors.

“Volatility has been very low because the market overall supported by improving earnings,” said Marco Pirondini, head of equity at Amundi US. “But there is always some speculation in other corners of the market.”

The VIX, which many investors refer to as Wall Street’s “fear gauge,” is now hovering around the pre-pandemic levels of February 2020. It’s been steadily declining since peaking in March of last year. The VIX has fallen nearly 15% in 2021.

But the VIX spiked more than 10% Friday morning, and some experts warn that the summer and latter half of 2021 could be a bit bumpier than the first six months of the year.

“When you look at the VIX, it’s eerily quiet. But that’s a little bit misleading,” said Darren Schuringa, CEO and founder of ASYMmetric ETFs, which runs a fund designed to lower investor risk.

Schuringa said he’s concerned about the “speculative excess” in the meme stocks as well as in the tech sector and thinks that a broader market correction could be on the horizon.