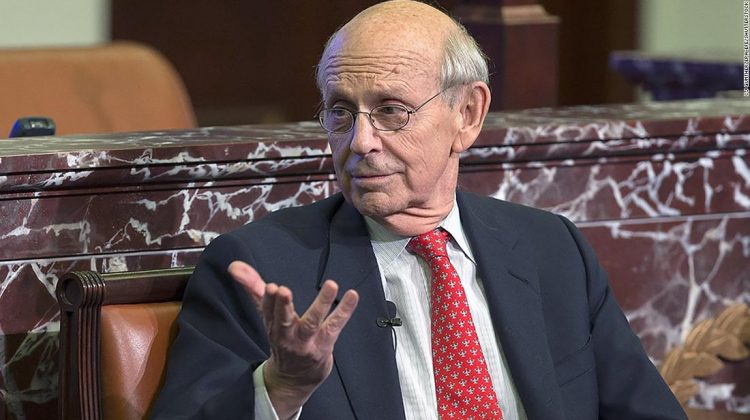 But what some liberals want to hear from the 82-year-old Breyer as the session ends in upcoming days is when he might retire. For them, the answer, reflecting the politically fraught confirmation process rather than Breyer’s legal contributions, should be “soon.”

Everyone may have to wait. No sign has emerged that Breyer would announce he is stepping down this week. That, however, may not be the end of it.

Once the end-of-term pressure eases, the justice may still weigh competing considerations this summer, including his new power as the leading liberal (after last year’s death of Ruth Bader Ginsburg), his view that judges should separate themselves from politics and his awareness that waiting another year could imperil President Joe Biden’s choice of a successor.

Breyer’s vision about keeping judges above politics, expressed in a Harvard lecture in April, will be published in a book this September.

The escalating turmoil of Supreme Court confirmations surely presents a dilemma for Breyer, who appears healthy and enjoys his job but is also wise to the ways of Washington.

The Democrats’ majority in the Senate, which has the constitutional “advice and consent” power over judicial nominees, hangs by a single vote.

A 1994 appointee of President Bill Clinton who served as a Senate Judiciary Committee counsel in his early career, Breyer would understand that Democrat Biden has the best chance of promptly filling any vacancy while Democrats control the Senate. He also witnessed the consequences of Ginsburg’s choice to remain on the bench rather than retire when Barack Obama was president and the Senate in Democratic hands.

The Biden White House has sidestepped the public debate over Breyer’s possible retirement. Biden officials appear to be respecting his effort to sort out his options. They may also think that some delay of any blockbuster announcement allows them to focus on their infrastructure proposal and other legislative agenda goals.

Asked Friday whether Biden hopes to see a justice retire this year, White House press secretary Jen Psaki offered no hint of the President’s wishes: “It’s a decision for them to make as an individual, and he still would support whatever decision they make.”

The Senate’s one-vote Democratic majority would presumably hold at least until after the November 2022 midterm elections. So Breyer could comfortably wait until next June, when the 2021-22 session closes. But there is nothing comfortable about the message from law professors and liberal advocates who raise the specter of a single Democratic death or defection in the chamber, allowing Republican Sen. Mitch McConnell to take over as majority leader.

Liberal professors and progressive organizations took out ads in The New York Times and Politico this month urging Breyer to retire soon so that Biden could name a younger liberal. Democratic Rep. Alexandria Ocasio-Cortez of New York has been among the Democratic politicians who have said Breyer should retire.

Liberals recall the bare-knuckles maneuvers of then-Majority Leader McConnell, who prevented all Senate consideration of Obama’s choice of Merrick Garland for the vacancy caused by the February 2016 death of Justice Antonin Scalia.

Yet in late 2020, McConnell moved quickly to fill the Ginsburg vacancy so that Trump’s third appointee, Amy Coney Barrett, was in place less than six weeks after Ginsburg’s death and just days before the November presidential election.

The bench, which for decades had been 5-4 conservative-liberal, currently operates with a 6-3 conservative advantage. Any Biden choice of a successor to Breyer would not alter that dynamic. Liberals fear, however, political complications that would weaken their already weak hand.

Breyer, a native of San Francisco, taught at Harvard law school and served as an appellate judge before his appointment 27 years ago. Until this year, he labored in the shadow of more senior liberals, including Ginsburg, a 1993 Clinton appointee.

As senior member on the left, Breyer has the power to assign the opinion for that wing. In one of the most ideologically loaded cases this session, the conservative majority strengthened property rights as it rejected a California regulation that gave union organizers temporary access to agricultural land to speak to migrant farmworkers.

Breyer kept the dissenting opinion for himself, arguing that the expansive approach of Chief Justice John Roberts would threaten many ordinary regulations covering the environment and public safety.

Over the years, Breyer has helped generate cross-ideological consensus behind the scenes, notably on disputes over Obamacare, which the justices have three times voted to keep alive as Republican challengers tried to end it. In the justices’ private discussions on cases, Breyer now speaks third, by seniority, after Roberts and senior conservative Justice Clarence Thomas and may have a greater chance of influencing the debate that follows.

Roberts assigned Breyer two high-profile decisions issued this month. Breyer wrote for the 7-2 majority that dismissed the latest Obamacare challenge and for the 8-1 majority that enhanced student speech rights. The court sided with a cheerleader disciplined by school officials for posting a profane rant on Snapchat when she failed to make the varsity squad.

The justices still have five remaining cases to decide, including disputes over Arizona voter restrictions and a California public disclosure requirement for charities’ major donors.

Next term, more daunting cases could reinforce the ideological divisions. The justices have agreed to resolve abortion-rights and gun-control disputes and are poised to hear a controversy over the future of university affirmative action.

Breyer, who has written important opinions related to abortion rights and racial remedies, may want to remain on the bench to influence new battles.

The next session begins on October 4. A few weeks before that, on September 14, Harvard University Press is scheduled to publish Breyer’s book “The Authority of the Court and the Peril of Politics.”

Harvard University Press has been promoting the book on its website: “A sitting justice reflects upon the authority of the Supreme Court — how that authority was gained and how measures to restructure the Court could undermine both the Court and the constitutional system of checks and balances that depend on it.”

Biden has said that when a vacancy occurs he wants to appoint an African American woman, which would be a first for the high court.

One of the most prominent candidates could be Judge Ketanji Brown Jackson, whom Biden recently elevated from a US district court in Washington, DC, to the US Court of Appeals for the District of Columbia Circuit.

Three of the current justices were appointed to the high court from that powerful bench, including Roberts. Ginsburg, too, had served on the DC Circuit.

Jackson, it so happens, once worked for Breyer as a law clerk, providing, perhaps, yet one more factor for him to consider as he mulls future moves.