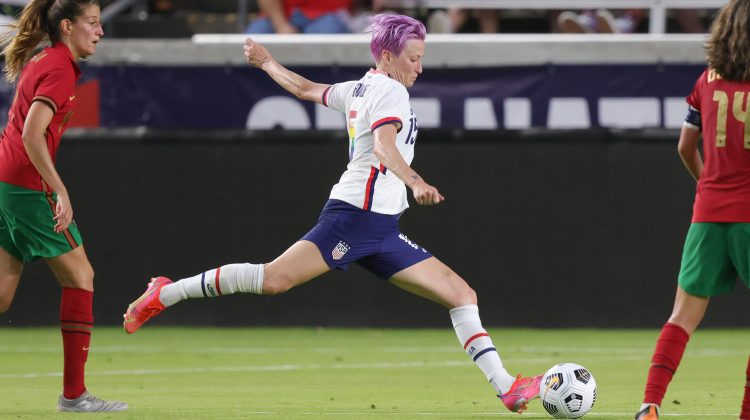 United States forward Megan Rapinoe (15) shoots the ball in action during a WNT Summer Series friendly match between the United States and Portugal on June 10, 2021 at BBVA Stadium in Houston, TX.

Sports marketers are leaving money on the table by not investing more in pro women’s leagues, according to a new study by the Sports Innovation Lab, a Boston-based tech research firm. But a new business model that caters to communities of “Fluid Fans” for particular athletes, and focuses more on licensing and sponsorships than TV rights and attendance, could turn that around.

The company released the study, called “The Fan Project,” on Monday and provided CNBC an early copy. It shows a new business model, referred to as the “community-based monetization” model. The Sports Innovation Lab (SIL) provided data points on how companies can examine fan behavior around women’s sports and engagement with leagues and players. Brands can then identify entry points that could open up new revenue streams.

“That’s exactly what it is,” said Angela Ruggiero, CEO and co-founder of SIL, of the study. “Using data, tell a different narrative – look at the market in a different perspective and then provide that plan, which is based on fan behavior.”

SIL partnered with leagues including the Women’s National Basketball Association, LPGA Tour, Athletes Unlimited, and the National Women’s Soccer League for the report. It found women’s sports is supported mainly by the “Fluid Fan.”

These people rarely have alliances with teams but often follow particular athletes.

Consequently, SIL recommends doing away with the traditional business model used primarily in men’s leagues. This model is tied up in rights, and measures success from TV viewership, in-person attendance, and restricted territories. Hence, it can’t meet fans where they are.

The community-based monetization model is based on content via storytelling, more accessibility options, and preparing for a future where sponsorships and licensing will outgrow broadcast money.

“If we can put data behind the business opportunity of women’s sports – there’s money being left on the table,” Ruggiero said. “That was the impetus for this. Our company has always been about inclusivity and making sure sports thrives for all, so we are applying our methodology and data to the women’s sector.”

Skylar Diggins-Smith #4 of the Phoenix Mercury looks to pass the ball during the game against the Dallas Wings on June 11, 2021 at Phoenix Suns Arena in Phoenix, Arizona.

Caiti Donovan, SIL’s vice president of data and insights, pointed to a rise in popularity among women’s sports over the last year.

In October, ESPN said the three-game WNBA Finals series featuring the Seattle Storm and Las Vegas Aces averaged 440,000 viewers, with Game 3 averaging 570,000 viewers. The network said the final game had a 34% increase in viewers over the 2019 WNBA Finals Game 3 contest.

“The quality of viewership occurring within the women’s sports ecosystem is present because we can see the fan behaviors,” Donovan added. “We can see the engagement; how deep it goes, and why it’s important for brands to tap into and the opportunity that exists from a revenue perspective because of it.”

“We believe there will be a shift from linear broadcast and tickets into OTT, sponsorships and merchandise,” Waldhorn said. “If women’s sports can adopt a community-based monetization model, they will better be able to capitalize on sponsorship and merchandise.”

She added if women’s sports could achieve 10% of total sponsorship money, that could add $2.3 billion revenue by 2023. The global sports market is projected to reach $826 billion by 2030, according to research firm, The Business Research Company. Asked how much women’s sports could see of that amount, should the community-based model work, all three women predicted over $200 billion.

“If you invest, they will come. That’s what we’re saying in this report,” said Ruggiero. “Those that understand that shift in revenue will be able to lean into it. Women’s sports, in our opinion, is in the perfect position to lean into and monetize this new model.”

The study also measured corporations, including Visa and Nike. It found increased growth around the brands after aligning with women’s sports.

When it comes to favorite athletes, fans of women’s sports want more access to superstars like soccer player Megan Rapinoe.

Donovan said the conversation around Rapinoe is diversified, as fans are intrigued by her performance on the field and life away from sports. It’s further evidence fans want to engage with players as people, not just athletes, added Ruggiero.

WNBA stars Sue Bird and Candace Parker came in second and third on the list. NBA star Steph Curry finished fourth, as fans support Curry’s advocacy for women’s sports and like his personality. And soccer player Ashlyn Harris is fifth on the list.

Said Ruggiero: “There’s a lot of talk around e-sports and NFTs in a lot of other opportunities, but with this data and the right understanding of what to do – there is a lot of money that can be made.”