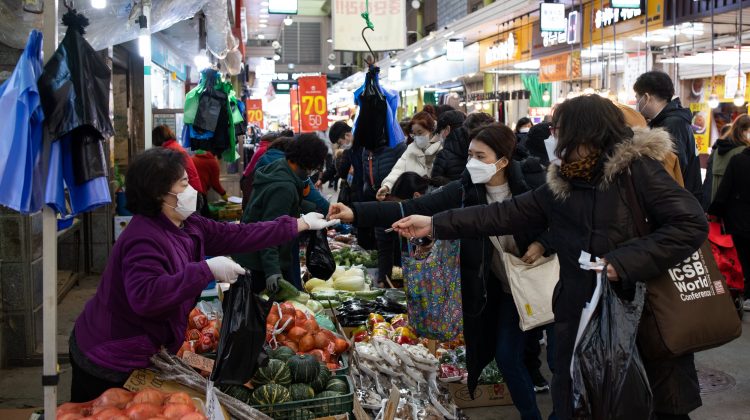 Customers wearing protective masks pay for their purchase at a vegetable stall in Mangwon Market in Seoul, South Korea, on Tuesday, Feb. 9, 2021.

South Korea is looking to open up its economy and work on travel bubble programs given its relative success in controlling the spread of Covid-19, its deputy prime minister told CNBC in an exclusive interview.

The government plans to boost consumption and further stimulate the economy in the second half of this year — and policies will be in place to achieve that goal, said Hong Nam-ki, who is also South Korea’s minister of economy and finance.

“I would say that the current government has been relatively successful in both the infection control and vaccination,” he told CNBC’s Chery Kang on Friday, according to a CNBC translation of his Korean remarks. “Based on the achievements, the current government now intends to promote economic growth while maintaining such health measures.”

In fact, he said that South Korea is aiming for herd immunity by November, which means the virus can no longer spread rapidly as most of the population will either be fully vaccinated or have become immune through infections.

As of last week, 30% of South Korea’s population had received their vaccinations and Hong says the country will be able to reach 70% by September.

Our plan now is to achieve herd immunity by November — but in my personal opinion, we will be able to pull up the timeline.

The country has reported more than 155,500 cases, and at least 2,015 deaths as of Monday, according to data from Johns Hopkins University — figures that are relatively controlled compared to most Asian countries.

In contrast, India — which has the highest number of cases in Asia — officially reported more than 30.2 million cases as of Monday, according to Hopkins. Indonesia has 2.11 million cases while the Philippines has nearly 1.4 million caseloads, the data showed.

“Our plan now is to achieve herd immunity by November — but in my personal opinion, we will be able to pull up the timeline,” Hong said.

“If the inoculation goes as planned, we believe the Covid-19 situation will be controlled. Then, the measures to support consumption and economic recovery can go ahead without any disruptions from July. And we will push in that direction.”

However, if the pandemic were to get worse, it will be difficult to push forward those policies on boosting growth, he cautioned.

The South Korean government plans to support travel bubble programs for those who are fully vaccinated, Hong said. A travel bubble is a pre-arranged deal with another country that stipulates that travelers from both countries will be allowed quarantine-travel if certain conditions are met — such as negative Covid tests or full vaccination.

However, whether the travel bubble will happen depends on the vaccination progress and discussions with other countries, he said, declining to name those countries.

In early June, Singapore newspaper Straits Times reported that South Korea was exploring travel bubble possibilities with a few countries, including Singapore and Taiwan, to allow quarantine-free travel for those who have been vaccinated.

“I believe more countries will be on the list for countries that are in demand for travel, depending on health conditions, vaccination rates and the level of immigration convenience,” Hong told CNBC.

“I think we need to continue working with private tour operators to examine the virus situation to decide exactly which countries,” he added.

For now, one initiative citizens can at least indulge in could be “flights to nowhere,” a destination-free concept that a few countries introduced during the pandemic.

“Even if you cannot go abroad, there were flights offered without landing,” Hong said. “Passengers could fly all the way to Japan, hover above the Japanese sky and then come back without landing. A lot of people showed interest in this and it has been used a lot,” he said referring to such flights which were introduced in South Korea last year.

“So if the health situation improves and if the vaccination campaign speeds up more, we believe that we would be moving into (that) direction.”