The worry that consumer prices will become embedded at levels far above its 2 per cent target led the ECB’s governing council to stop printing more money for bond purchases last week and in early June to announce plans to raise rates for the first time in a decade.

The central bank has said it intends to raise its deposit rate by a quarter percentage point to minus 0.25 per cent on July 21, followed by a bigger rise in September unless inflation cools quickly.

But some council members want it to move more quickly, according to the minutes of the June 9 meeting in Amsterdam. The minutes, published on Thursday, said: “A number of members expressed an initial preference for keeping the door open for a larger hike at the July meeting.”

Some members of the council have called for a rise of 50 basis points later this month to counter record-high inflation. Data last week showed consumer prices rose by a record 8.6 per cent in the year to June, up from 8.1 per cent in May and bolstering calls for a bigger rise.

Most economists expect the ECB to stick to its plan for a 25 basis point rate rise in two weeks’ time. Carsten Brzeski, head of macro research at ING, said this scenario “remains in place” even if the “door is still open” for a bigger move.

The minutes highlighted policymakers’ fears that inflation could become entrenched, saying “persistently high energy and food prices, inflation expectations rising above target and higher than anticipated wage rises” were among the risks to the outlook.

An ECB survey of eurozone businesses, also published on Thursday, found over 70 per cent had increased their selling prices over the past year and three-quarters of them expected to do so over the next year. Only 3 per cent expected to cut their prices.

The minutes also showed ECB policymakers expected growth “over the next few quarters would be weak and the risk of a technical recession needed to be borne in mind”.

The ECB thinks the economy could shrink by 1.7 per cent next year, should the war in Ukraine lead to a complete cut-off in Russian energy supplies. “In particular, a further disruption in the energy supply to the euro area would be a major risk,” the minutes said. 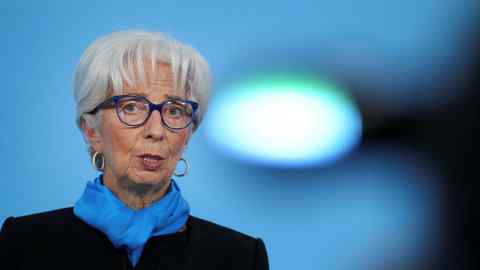 BusinessEurope, an umbrella group of European business federations, on Thursday slashed its growth forecasts for the eurozone to 2.5 per cent this year and 1.9 per cent next year, while warning “individual member states may experience at least ‘technical recessions’ in 2022”.

Rate-setters face a balancing act between reversing almost a decade of ultra-loose monetary policy to address soaring prices while trying to avoid another debt crisis in Europe. Borrowing costs for heavily indebted countries such as Italy have risen more sharply in recent months than those of more frugal member states such as Germany — a problem the ECB refers to as “fragmentation risk”.

The minutes of last month’s meeting reveal that some of the 25-member governing council called for work on a possible new tool to counter the risk of a fresh crisis to “be accelerated and completed rapidly since the risk of fragmentation could intensify”.

However, it was almost a week later before the ECB announced after an emergency meeting that it would speed up work on the tool.

The planned instrument, which the ECB has given a working name of the Transmission Protection Mechanism, was discussed at a meeting of the ECB council on Wednesday, though no final decisions were taken.

FT survey: How are you handling higher inflation?

We are exploring the impact of rising living costs on people around the world and want to hear from readers about what you are doing to combat costs. Tell us via a short survey.