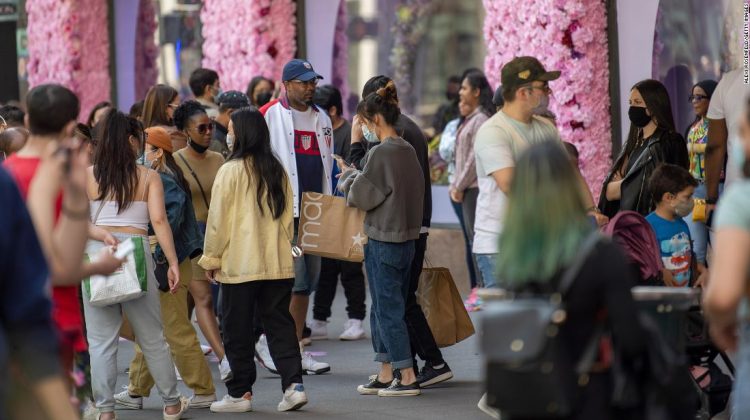 The official arbiter, the National Bureau of Economic Research, hasn’t said this downturn is over. Yet it sure feels like the economy is back in recovery mode with upbeat signs in jobs, housing and stocks.
Some experts think this recession is a mirror image of the one in 1918, which was also sparked by a pandemic: the global influenza outbreak. That downturn lasted just 7 months and was the second shortest on record.
Could the Covid recession follow a similar path? We’ll have to wait for a ruling from the NBER, the organization that declares the beginning and end of economic cycles — which usually takes several months until after a recession is over to declare the end.

There are certainly pockets of the economy still far from pre-February 2020 levels, like small businesses, retail and restaurants.

But plenty of areas are getting better. GDP is growing again, surging for the past three quarters after dips in the first half of last year. The job market is recovering too, as workers in hard-hit services sectors return to employment. Earnings have rebounded along with the stock market. The housing market continues to sizzle.

And it’s pretty much back to business as usual for many major cities.

“We’re not in a downturn anymore. Things are incredibly robust and it’s almost a euphoria,” said Ivan Kaufman, chairman and CEO of Arbor Realty Trust (ABR), a real estate firm that lends to apartment owners and commercial real estate firms.

Default rates are relatively low for Kaufman’s company’s clients, he said, adding that rents — which took a brief hit last year — are starting to climb again. Demand for leases is climbing as well.

The demise of urban America may have been exaggerated.

“The issue that existed with Covid was that nobody was going into cities,” Kaufman said. “That phenomenon created some vacancies. But that is over.”

Urban real estate isn’t the only sector of the economy that has come roaring back. Money management firm ClearBridge Investments has a recession risk dashboard that looks at a dozen economic indicators, including retail sales, housing, commodity prices, the job market and trucking shipments.

ClearBridge said earlier this month that most of these measures bottomed out in May 2020 and all 12 indicators are now flashing recovery signs.

Analysts at ClearBridge said in a report that with this in mind, they think the recession may have ended about a year ago — just four months after it began. They even used a joke from “Meet the Parents” to describe the economy, saying that is “strong … to quite strong.”

Meanwhile investors aren’t acting like this is still a recession. The biggest concern now is whether or not the economy will heat up too quickly, forcing the Federal Reserve to taper bond purchases and raise rates sooner than anticipated.

“Every recession is different and this is an unusual one. But the market has clearly moved on from the pandemic,” said Matt Peron, director of research at Janus Henderson Investors. “Investors are focused on inflation. It’s the number one, two and three risk.”

Beyond worries about the Fed taking away the proverbial punch bowl and cutting back on stimulus too soon, Peron said, investors also fear the central bank will not act quickly enough to tamp down inflation pressures before they run out of control.

“The Fed has to walk a tightrope,” Peron said, adding that a central bank mistake could lead to a so-called double dip recession, when the economy quickly contracts again after a recovery.

That’s what happened after the historically brief recession of 1980, which at only six months is the shortest on record. A series of sharp rate hikes by the Fed helped lead to another recession that lasted from July 1981 to November 1982.

But many Wall Street experts and economists believe the Fed won’t be forced to raise rates anytime soon or that inflation will run amok.

“A period of persistent inflation driven by higher wages feeding into higher prices could lead to tighter financial conditions and put this young expansion in jeopardy,” strategists at Nuveen said in a report Monday. “But we remain in the camp that expects inflation to moderate from here.”

The strategists believe the labor market and supply shortages caused by the pandemic should soon abate. That will reduce pressure on wage growth, a key component of inflation.

They also think companies have made enough investments to boost productivity, which should mean they won’t have to pass on the costs of higher commodity prices to consumers.

If that’s the case, the economy could continue to expand for the foreseeable future. The only question now is when the NBER will actually come out and officially declare an end to the 2020 recession.