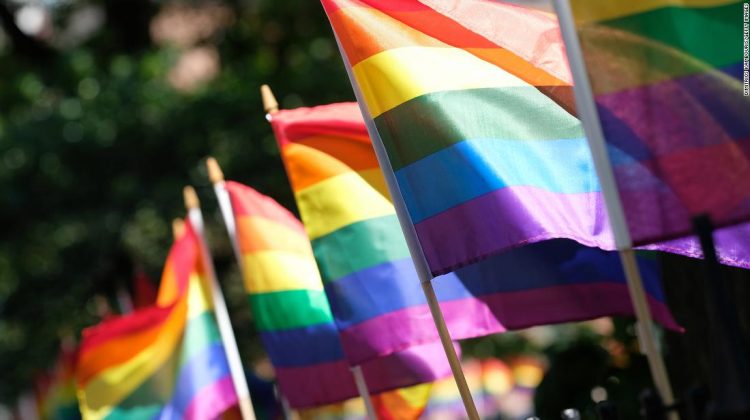 “This is what makes this department so special,” Shea said. “We are far from perfect. But you look at the diversity of this room — whether it’s diversity of the color of your skin, your sexual orientation or anything else — you’ve heard me say, we are your police department, and I am so damn proud to be standing up here.”

But this year, that department will not be on display at the Pride march.

In May, Heritages of Pride, the organizing body of NYC Pride, announced a five-year ban on the NYPD’s involvement in the march. Not only will a private security firm take the lead on securing the event — though the NYPD will still be present in a more limited capacity and at a distance, organizers say — but the Gay Officers’ Action League (GOAL), the LGBTQ+ organization of NYPD officers, will not be allowed to participate.

While NYC PRIDE has emphasized this year’s March is largely virtual, and the in-person march has been scaled down to highlight this year’s grand marshals and a handful of community groups, the decision has elicited a strong response from the NYPD and, most critically, from gay officers who find themselves in two competing communities.

“You’re taking a part of me away, because at the end of the day I should be able to be who I am and be proud of both,” said NYPD Sgt. Ana Arboleda. “Be proud of being a police officer. Be proud of being gay. So why can’t I be both? Why do I have to be thrown back in the closet for one aspect of me?”

‘Your community needs you to take a stand for them’

Andre Thomas, one of the two co-chairs of this year’s NYC Pride, expected some blowback from the decision to exclude the police from this year’s march.

“For us, it’s more important to be right than popular,” Thomas said. “I think for too long we traded popularity and access for the rights of those who actually needed it.”

He cited a troubling event during last year’s Pride weekend. While NYC Pride was held totally virtually in June 2020 due to the coronavirus pandemic, another organization, Reclaim Pride NYC, put on a Queer Liberation March during Pride weekend. A group of marchers went to Washington Square Park, according to a report later released by New York’s Attorney General, and “ended up in a confrontation with police.”

In the same report, witnesses contend officers responded with “indiscriminate use of pepper spray,” after a group of protesters tried interfering with the arrest of a small group that tried to graffiti a police car.

Thomas points to that altercation as what prompted Heritages of Pride to take action, after the wider community condemned what they felt was initially a lackluster response from the organization.

“We learned that hard lesson that when something happens, your community needs you to take a stand for them,” Thomas said.

Banning the NYPD, Thomas said, was a return to the activist spirit that led to the Stonewall Uprising and other movements within the LGBTQ+ community.

“People in our community said, ‘Hey, we actually feel like you’re standing with us.'”

Thomas said his group would be open to negotiation or compromise with GOAL — but with one caveat: no uniforms or service weapons at the march.

“I’ve worn a uniform myself,” Thomas said. “I was in the military for eight years. I know the effect that can have on people.

“Let’s bring you to a level where you are like everybody else walking our parade. You’re here, you’re happy, you’re enjoying yourself and you’re not wearing a weapon.”

‘We’re only bigger with visibility’

This is the first year in about a decade that Arboleda, a 12-year veteran of the NYPD who also serves as vice president of GOAL, will not don her navy blue, wool dress uniform as a part of her annual celebration of Pride.

She feels that the visibility of LGBTQ+ officers is deeply important to mending relations between law enforcement and the gay community.

“We’re only bigger with visibility,” Arboleda said. “If you take that visibility away, how can we do anything else? Progress is being visible. If you’re not visible, you’re not counted.”

That visibility was hard won. In the early 1990s, GOAL challenged the city government in court for the right to wear uniforms in the march. In 1996, they were able to don their uniforms for the first time. NYPD Officer Jason Samuel, a member of GOAL, pointed to the founding of GOAL as being in an “activist, defiant spirit” against a department and city that, at the time, “didn’t have space for queer officers, and made that known.”

Arboleda and Samuel acknowledge the tension between the police and LGBTQ+ communities. But neither says that their membership in one should exclude the other.

GOAL will celebrate Pride with its own event in Harlem, according to the organization’s president, Brian Downey. But it will be a bittersweet celebration, the officers say.