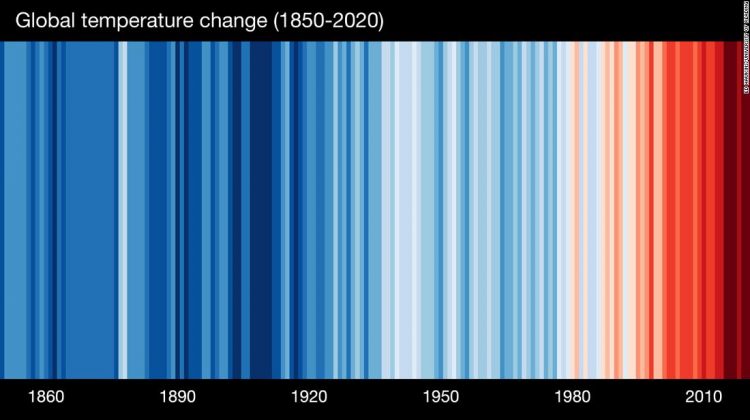 At its core, the #ShowYourStripes campaign is a visual one, designed to illustrate something inherently difficult to picture: how much the Earth has warmed.

The images show a significant shift from blue to red in recent years, signaling an alarming rise in temperatures around the world. The deep red stripes on the right side underscore how human activity has contributed to planet-heating emissions over time.

Ed Hawkins, a climate researcher at the University of Reading and the creator of the stripes, said the most striking change recently has been that “nearly every country has a dark red stripe at the end.”

“The idea [behind the stripes] is to communicate climate change in a simple, stark and compelling way as possible,” Hawkins said Monday during a video conversation with Climate Central. “It’s just using color to show reality of our warming world.”
The design has become a trend since Hawkins debuted it in 2018. The stripes have been worn as badges by members of Congress, used on the cover of the Economist and as the backdrop for concerts. They were even used as a custom wrap for a Tesla.
In addition to the design making it to London Fashion Week this year, here are ways people around the world are showcasing the warming stripes and raising awareness around the severity of climate change.