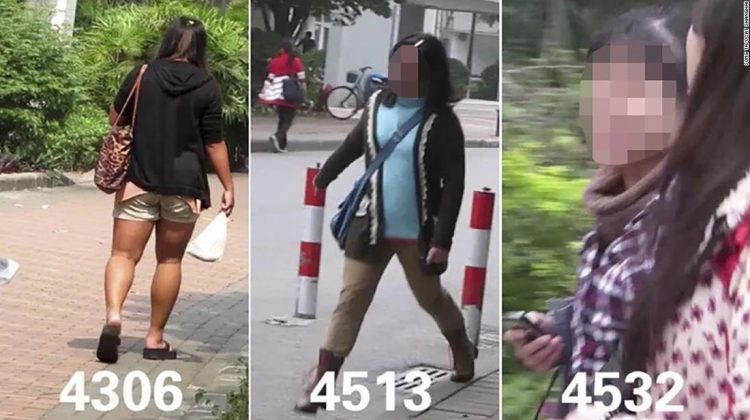 A Shanghai gallery has apologized for exhibiting a seven-hour video in which an artist filmed passing women before giving them a score and ordering them “from the prettiest to the ugliest.”

In a statement published Friday, non-profit art gallery OCAT Shanghai apologized to any visitors who had been “disturbed, hurt and left feeling uncomfortable” by the work, saying there had been “omissions in due diligence.”

In the controversial video, titled “Uglier and Uglier,” artist Song Ta filmed and ranked college students at his alma mater based on their appearance. Originally produced in 2012, the work’s Chinese title literally translates as “school flower,” a term used to describe beautiful female university students.

The video had been on display since April as part of a group exhibition titled “The Circular Impact: Video Art 21.” The show has since been shut to the public, with OCAT Shanghai confirming that the work has been withdrawn.

In an exhibition program, the artist recommended that visitors arrive early at the gallery, due to the fact his video begins with those he deemed most attractive.

“Within this (seven-hour-plus) video you will see them show up accordingly from the prettiest to the ugliest,” Song is quoted as saying. “So if you want to see the campus queen, you have to go to the museum as early as possible. Otherwise, when the dusk comes, it will become a living hell in this place.”

Neither Song nor his gallery representatives responded to CNN’s request for comment.

OCAT Shanghai’s decision to pull the work followed growing outrage on Chinese social media. A hashtag about the video had been viewed 95 million times on microblogging platform Weibo at the time of publication. One user called for the show’s curator to resign, saying he was “unable to distinguish between modern art and trash,” while another said the work “insulted women and infringed (on) their legal rights.”

“Disguising peeping by (framing it as) ‘art’ and exhibition, and ignoring morality and the law,” read another user comment. “Song Ta and OCAT are both garbage.”

In a 2019 interview with Chinese media outlet BIE, formally known as Vice China, Song likened his work to a street style photography shoot. He said he had asked a female assistant to help filming, to make it “less creepy,” though in the aforementioned exhibition brochure he is quoted saying he produced the video while “randomly recording passing girls.”

CNN was unable to confirm whether any of the women featured in the video consented to be filmed. OCAT Shanghai’s apology said the work was “suspected of infringement and other issues.”

“OCAT Shanghai will conduct … self-reflection, self-examination and reflection on the public issues and social concerns caused by this incident,” the statement continued. “As an art gallery that supports a diversity of art concepts, we will take this as a lesson, and constantly improve ourselves, treating everyone with empathy.”

In his BIE interview, Song said he funded “Uglier and Uglier” with an art grant, which paid for three assistants. He divided the women into “three large folders: beauty, medium, ugly,” which were then subdivided and ranked.

In 2013, “Uglier and Uglier” was displayed at the UCCA Center for Contemporary Art in Beijing. Song later gave a talk at the institution, which described his works as “unambiguously humorous” and “often calling into question established societal codes of conduct.” UCCA did not respond to CNN’s request for comment.

In 2014, Song also reportedly staged a live version of “Uglier and Uglier,” with a name translating as “One Is Worse Than Another,” where he lined up 44 women in order of their attractiveness.