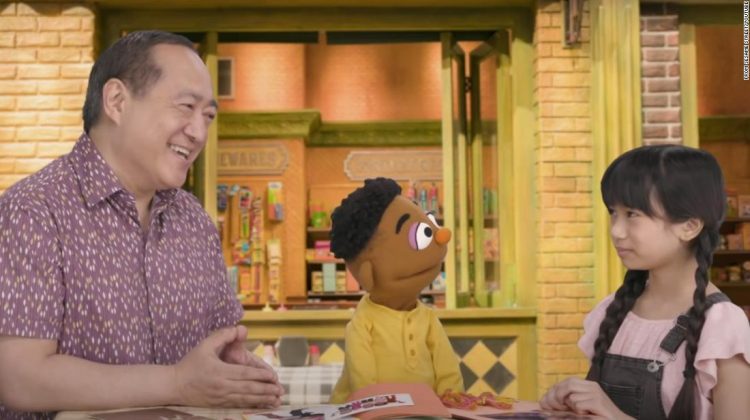 In the video, neighborhood residents Alan, the Japanese American owner of Hooper’s Store, and Wes, a recently introduced African American character on the show, encounter their friend Analyn after she has an upsetting experience at the park.

Analyn, who is of Filipino heritage, tells Alan and Wes that a boy ridiculed her eyes and called them “slanty.” The incident leaves her feeling sad, and she asks Alan and Wes if her eyes are indeed ugly. The two proceed to reassure Analyn that her eyes are beautiful and part of what makes her who she is.

“Your eyes tell the story of your family / They show where you come from and how you came to be,” the song’s lyrics go. “The color, the shape and the size / Should always make you proud of your eyes.”

By the end of the song, Analyn realizes that her eyes resemble those of her grandmother, who is from the Philippines and who Analyn finds beautiful.

Sesame Workshop, the nonprofit organization behind the children’s educational program, has ramped up efforts around racial justice with a number of recent resources intended to facilitate honest conversations about race and help children deal with and stand up to racism.
A recent study conducted by Sesame Workshop found that 86% of children believe that people of different races are not treated fairly in the US. Nearly half of the children surveyed reported experiencing some kind of discrimination, with one-third encountering discrimination directly tied to their race or ethnicity.
“Proud of Your Eyes” is part of Sesame Workshop’s Coming Together initiative, which seeks to help children understand and celebrate different races, ethnicities and cultures.
Another video in the initiative, titled “Breathe, Feel, Share” features characters Abby and Elijah helping Wes cope with being made fun of for bringing curry chicken to school for lunch.