Saudi Arabia’s energy minister has signalled a willingness to pump more oil if the global energy crisis worsens, while describing this month’s decision by the Opec+ cartel to cut crude supply during a period of high prices as a “mature” decision.

Prince Abdulaziz bin Salman said the move to produce less oil from next month, which has caused a rift with the US, was necessary to provide a bigger spare capacity buffer if sanctions on Russian exports, or any other unforeseen events, led to a major drop in global supply.

“You need to make sure you build a situation where if things [get] worse you have the ability to [respond],” Prince Abdulaziz, who also chairs the oil producers’ group, told the Future Investment Initiative investor conference in Riyadh. “Running out of capacity has a much dearer cost than what people can imagine.”

The Opec+ production cut, announced this month, pushed oil prices higher just as much of the world was struggling with soaring energy costs and rising inflation. The decision by its member countries, which includes Russia, provoked a fierce backlash from the White House, which accused the cartel of helping to prop up Russia’s war in Ukraine.

Prince Abdulaziz used the onstage interview to present Saudi Arabia, the world’s biggest oil exporter, as a responsible energy provider to the world. He criticised the US for withdrawing millions of barrels oil from its Strategic Petroleum Reserve, the world’s largest, to prevent prices rising faster.

“We, as Saudi Arabia, decided to be the maturer guys,” he said. “People are depleting their emergency stocks . . . [using] it as a mechanism to manipulate markets when its profound purpose is to mitigate shortages of supply.”

OECD oil stocks were 243mn barrels below the five-year average as of the end of August, according to the International Energy Agency. Stocks in the US SSP are at their lowest level since 1984. 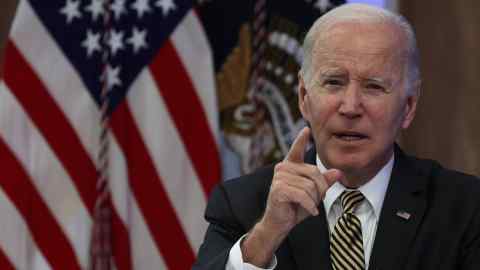 Riyadh said production cuts were needed now to restore its spare capacity and avoid the possibility of a more dangerous spike in crude prices later. Critics say the kingdom’s aim was to prop up its own revenues by maintaining oil above $90 a barrel — almost twice the long-term historical price.

Brent, the international oil benchmark, was trading at about $93 a barrel on Tuesday.

The oil spat has pushed US-Saudi relations to near historic lows and stoked anxiety in European capitals over high energy prices. But Prince Abdulaziz insisted Saudi Arabia was ready to send more oil to Europe if EU sanctions on Russian crude, which come into full force on December 5, led to shortages that needed to be filled.

Exports to Europe had already risen to 950,000 barrels per day in September from 190,000 b/d a year earlier, he said, adding that Saudi Arabia was in talks with “many” European governments, including Germany, Poland, the Czech Republic, Croatia and Romania, about boosting supply.

“We will be the supplier of those who want us to supply,” he said.