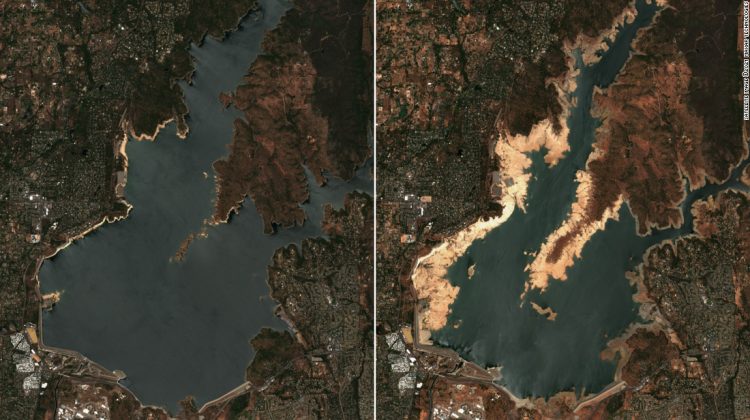 Lake Oroville, the state’s second largest reservoir, is only 35 percent full. A new satellite image from the Copernicus satellite, obtained by Maxar Technologies, shows just how low the lake’s water levels are. Lake Oroville is located just over 60 miles north of Sacramento, the state capital.

If you are unable to view the satellite images, click here.

A significant amount of lake bed has now become exposed due to the dramatic drop in water level. Boats still dot the lake in the Bidwell Canyon area, but many of the existing boat ramps are dry.

Water levels are so low at the lake that the Oroville Dam, located on the southwest corner of the lake, is expected to shut down.

The Edward Hyatt Power Plant, opened in 1967, has never been shut down before. It generates power for around 800,000 homes; its shutdown is expected to cause even further strain on California’s already taxed power grid.

Water levels at Lake Oroville are near historical lows, set back in 1977.

Over at Lake Folsom, just east of Sacramento, water levels are the lowest among California’s 12 major reservoirs.

An acre-foot is the amount of water needed to cover one acre, with one foot of water — about 325,851 gallons of water — according to the California Department of Water Resources.

Maxar Technologies’ satellite image from June 13, 2020 shows the lake when it was largely full. But 370 days later, a second satellite image shows a much different lake — the lake bed on the western shore is largely exposed.

Islands that once dotted the center of the lake have since disappeared, with the significant drop in water levels transforming them into a peninsula.

California’s largest reservoir, Lake Shasta, is down well over a million acre-foots, compared to last year. Right now, it only has about 41 percent of its total capacity.

The water level drop in the massive reservoir is significant. The green vegetation surrounding the lake helps show just how much of the lake bed has been exposed by drought.

Looking closely at the lake, floating marinas have also had to move with the water level.

The Trinity reservoir is the fourth largest in California, but like the others, has seen a significant drop in water levels. It’s at about roughly 49 percent of its total capacity.

Like the other lakes, satellite images show the water level drop has exposed much of the lake bed.

But more noticeable are the northern section of the lake, which is fed by the Trinity River and a number of other creeks. That area has seen the most dramatic drop in shoreline.

The waterways there had previously been robust, but the satellite imagery shows they appear to have slowed to a trickle.

The same situation is evident in the Millerton reservoir, located just north of Fresno, California. Water levels at the reservoir are at record low levels — and still falling.

Although it’s at about 51 percent capacity, the reservoir is fed by the San Joaquin River. In the northeastern part of the lake, what once was lake bed has become an apparent canyon for the River to snake through.

The San Luis reservoir, like the Oroville reservoir, is tracking near record water levels set back in 1977.

Satellite images show that the western and southern lake shores are down significantly.

Tunnel Island, in the western part of the lake, is now a peninsula. Water in the furthest reaches of Lone Oak Bay — the southernmost part of the lake — appears to have completely dried up.

Since June 2020, the McClure reservoir has lost almost half of its water. Right now, it’s about 41 percent full.

A year ago, the Merced River that feeds the reservoir filled the gulches on the westernmost parts of the lake. Now, the river trickles through the exposed lake bed.

Lake Mendocino is not managed by the state of California — the Army Corp of Engineers is in charge — but it’s a vital resource for its surrounding region. Right now, it’s at 38.2 percent capacity, and dropping.

Satellite images show just how much water is gone from the lake. Large swaths of the lake bed are now exposed.

The low levels at the Mendocino reservoir have pushed the local government in Healdsburg, California to impose strict water restrictions.

Residential customers are limited to just 74 gallons, per person daily, in an effort to reduce water consumption by 40 percent. Residents are not allowed to hose down driveways, plant new landscaping elements or grass, or wash personal vehicles.

Across the state, almost two million Californians are currently being asked to reduce water consumption.