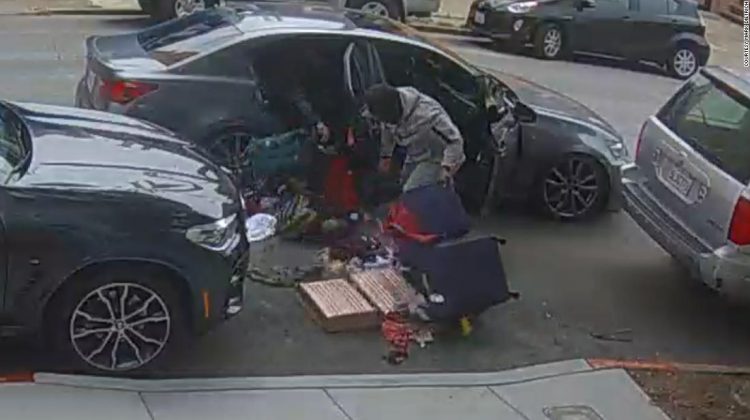 “At first, I thought it was a joke,” Dietrich said. But then, he checked the video captured by his home security camera.

A car door opens, the footage shows. With loud thumps, the gear hits the pavement — eight or nine suitcases, just flung out into the road.

“It’s, like, the most egregious video you can imagine,” he told CNN.

The belongings, Dietrich later learned, had been stolen from cars in popular San Francisco tourist areas, like Pier 39 and Ghirardelli Square.

“When I was able to go through and find the passports and the contact information of the owners, I contacted them, and they told me where they were,” he said.

The incident highlights a recent spate of brazen property crimes that has gripped the city since tourism picked back up. It’s one of a handful of interwoven crises that San Francisco is facing as it casts away Covid-19 limits.
As pandemic restrictions are lifted nationwide, cities and states are grappling with a raft of challenges, from surges in violent crime to a housing crunch to confronting mental health and substance abuse emergencies.
In San Francisco, police statistics show a rise in burglaries and a surge in car thefts. Meanwhile, tents occupied by homeless people — long a problem in this city known for its sky-high housing costs — exploded in number as shelters thinned out to prevent coronavirus spread.
The city has been actively trying to reduce the number of tents and at last count in April, there had been a 65% reduction, according to a spokesman for Mayor London Breed. Still, the evolving situation has exacerbated a raging mental health and drug crisis, with an overdose rate now literally flying off the charts.

From the San Francisco Police Department’s perspective, recent crime problems boil down to two factors: not enough cops on the street and a revolving door of criminals.

“These same people … are going into the stores and snatching property,” San Francisco Police Chief Bill Scott told CNN. “Once we arrest them, we find out they’ve been arrested over and over again. It’s frustrating.”

While overall crime decreased last year, burglaries in the city exploded — up 52%. The Richmond District alone saw a spike of 370%, records show.

Meantime, only 11 of the city’s top 25 repeat offenders for burglary are in custody, according to police.

“We’re at our wits’ end,” said Richie Greenberg, a former mayoral candidate who is leading an effort to recall San Francisco’s chief prosecutor.

Many lay blame with District Attorney Chesa Boudin, a former public defender. Since he was elected in 2019, Boudin has enacted controversial policies, such as ending cash bail, aimed at releasing people from incarceration (Los Angeles recently took a similar tack).

At the height of the pandemic, Boudin reduced the prison population by nearly 50%.

“We have a rogue DA,” Greenberg said.

Boudin said the city’s most pressing problems are better addressed at the root level. “The reality is we are never going to police or prosecute our way out of problems like poverty, mental illness and homelessness. The United States leads the world in locking people up and it has not made us safer,” he said.

Chief Scott, on the other hand, says, “If you don’t want people to sit in jail for running in the store and taking a garbage bag full of property, then put enough police officers out there to prevent it.”

Beyond the statistics is the brash nature of some recent property crimes. One man just last week was caught shoplifting at a Walgreens Pharmacy in plain view of a security guard and as CNN affiliate KGO-TV’s camera rolled.

The suspect was arrested after allegedly trying to steal from another store. Walgreens has closed 17 stores in San Francisco over the past five years due to organized crime rings, it said.

“Every single day — anytime they want,” a Walgreens clerk said of shoplifters who often take items like paper towels from his shop on busy Geary Avenue. “Sometimes there’s a group of shoplifters.”

The store has practically half its merchandise locked up to thwart thieves, a fact that now symbolizes everyday life here.

Homelessness also burgeoned in the Covid-19 era. In front of his carved-out space on the edge of a San Francisco street encampment, a 50-year-old named Cin’que pointed out while openly smoking meth in broad daylight that it “just helps me get through this sh*t.”

Tents and tarps line an entire street in the city’s Tenderloin neighborhood. Drivers stream by, apparently numb to the decrepit conditions.

San Francisco logged a record 712 drug overdose deaths last year and is on pace to exceed that this year, according to city data.

“If we had a serious, robust response to the homelessness, to the mental health crisis, to the drug overdoses that didn’t require police resources. I think the police staffing would be just fine,” Boudin said.