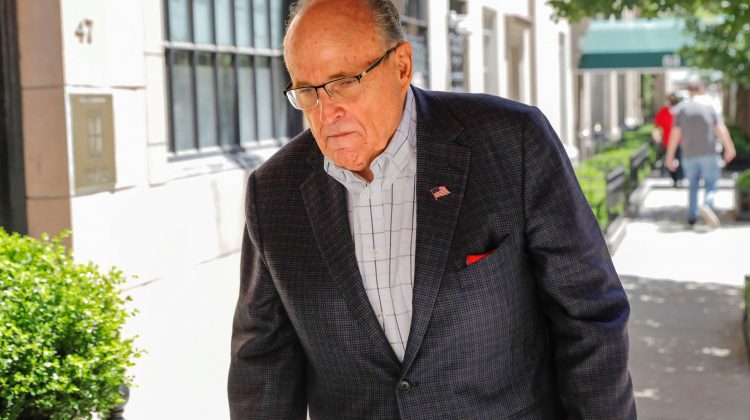 Mike Lindell, chief executive officer of My Pillow Inc., speaks to members of the media while arriving to federal court in Washington, D.C., U.S., on Thursday, June 24, 2021.

The temporary suspension came a day before Giuliani’s 52nd anniversary as a licensed lawyer in New York. It will stay in place pending the outcome of a formal disciplinary hearing.

Giuliani was quick to speak out. He appeared before reporters, who were outside his apartment building on Manhattan’s tony Upper East Side, to slam the “ridiculous” decision from the appellate judges.

“They just listen to false allegations made by the Democrats,” Giuliani said, NBC News reported.

“If you want to say I said something irresponsible, you have to give me a chance to defend myself,” Giuliani reportedly said, lamenting that “only Trump lawyers get investigated.”

But Giuliani was nowhere to be seen later Thursday, when U.S. District Judge Carl Nichols heard arguments about whether to dismiss three different defamation cases brought by Dominion Voting Systems.

Sibley and Arthur Aidala, another lawyer for Giuliani, did not immediately respond to CNBC’s requests for comment on the Dominion hearing.

Dominion in the lawsuits argues separately that Giuliani, Lindell and Powell had each harmed its reputation by spreading dozens of false and misleading claims about the company and its role in the contest between Trump and President Joe Biden.

Sibley in April filed a motion to dismiss the lawsuit, arguing that Dominion’s claims for relief were not brought in accordance with proper procedural standards of the court.

That argument differed from one brought by Powell’s lawyers, who argued in part that “no reasonable person” would believe that her false claims and conspiracy theories about the 2020 election were “truly statements of fact.”

Dominion, which operated voting machines in numerous states during the 2020 election cycle, is requesting roughly $1.3 billion in damages in each of those cases. Dominion has also sued Fox News for $1.6 billion, accusing the network of falsely claiming that it had rigged the election. Fox has moved to dismiss that case.

At the start of the hearing, Dominion lawyer Thomas Clare introduced CEO Poulos, who was sitting at the counsel table.

Dershowitz, the former Harvard law professor and one-time impeachment lawyer for Trump, had previously told CNBC he was playing an “extremely limited” role in the proceedings.

Lindell himself was present for the hearing, according to his lawyer Douglas Daniels, who explicitly introduced him to Nichols. “I would like to introduce to the court, Mr. Mike Lindell,” the CEO’s lawyer said.

After him, Powell attorney Howard Kleinhendler said during his introduction, “I’d also like to point out to the court that Ms. Powell is here.”

This is developing news. Please check back for updates.