The Rothermeres are considering taking Daily Mail and General Trust, owner of the Daily Mail newspaper, private after an approach for one of its data businesses.

The London-listed group, which spans news, events and data, said on Monday that it was in discussions “following a number of inquiries from third parties” to sell RMS, its insurance risk arm.

Pending a deal and the previously announced flotation of used car retailer Cazoo, in which it holds a 20 per cent stake, DMGT said the Bermuda-based holding company of its executive chair Jonathan Harmsworth, the Viscount Rothermere “would be prepared to make a possible cash offer” to acquire the rest of the shares and take DMGT private.

It would be a milestone for the company, which traces its roots back to the first issue of the Daily Mail, published in 1896 by Harmsworth’s great-grandfather. The group floated in 1932, a decade after it was formed to manage the family’s business interests that stretched beyond the newspaper empire.

The Rothermeres own 36 per cent of DMGT, but Harmsworth — who inherited his role as the company’s chair and controlling shareholder on the death of his father in 1998 — has owned all issued voting shares since 2013, meaning that any deal recommended to shareholders that has his backing will be approved.

DMGT’s dual shareholding structure, split into voting and non-voting shares, has no mechanism for minority investors, which include Lindsell Train, Artemis and Schroders, to rebel.

The potential restructure would take DMGT’s media and events divisions private, as well as its property information businesses Landmark and Trepp and its capital venture arm, which has about a dozen investments, such as the stake in Cazoo.

Shareholders would receive 251p for each share in addition to a special cash dividend of about 610p per share, giving the company an enterprise value of £810m.

It would be the latest in a series of shake-ups for DMGT, which in recent years has disposed of education business Hobsons, energy data operation Genscape and Zoopla, the property site. It has also distributed its stake in financial publisher Euromoney to shareholders and acquired the i newspaper as well as New Scientist magazine. 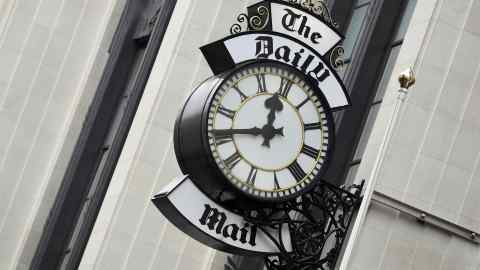 Thomas Singlehurst, analyst at Citi, said the potential reorganisation of the business depended on many conditions, adding that “there is also the question as to whether a bid . . . at [less than one time] sales is sufficiently generous”.

DMGT’s share price, which has risen more than 60 per cent over the past year, was up four per cent on Monday morning.

As with its peers, DMGT has struggled during the coronavirus pandemic as advertising suffered a severe hit. Underlying revenues fell 10 per cent to £1.2bn in the year to September, while pre-tax profit dropped 36 per cent to £72m.