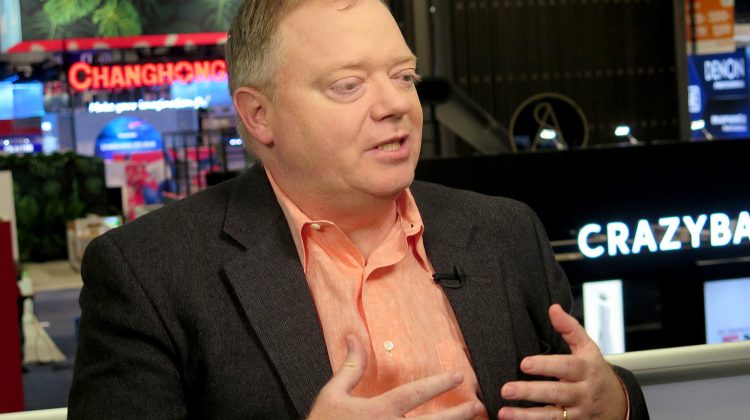 Roku has built a dominant position as the co-leading streaming video distribution platform in U.S. households, in a near dead-heat with Amazon. The two companies own more than 70% market share, according to research firm Parks Associates.

But can Roku maintain its lead over Apple and Google if Americans’ future is a house controlled by a voice-enabled smart-home device that can turn on and off a television and change the channel?

That’s not what people want, claims Roku CEO and founder Anthony Wood. He spoke with CNBC’s Alex Sherman in an exclusive interview.

(This interview has been edited for length and clarity. Wood’s thoughts on Roku’s culture can be found here.)

Alex Sherman, CNBC: Let’s talk about interactivity. Is it just a matter of time before Roku lets me watch sports and bet from my TV at the same time, and do other sorts of cool stuff people have never seen before?

Anthony Wood, Roku founder and CEO: It’s a complicated question. A couple points. One, it’s not as bad as it used to be, but even today, many companies just don’t really understand the attitude people have when watching TV. They want to sit there, drink their beer, and watch TV. You’ve seen over the years, there was this whole phase where there were interactive TV companies. They all failed, because people don’t want to do that. My philosophy is to keep things very simple. So any time interactive ideas have come up, we would not do that.

That said, there are some exceptions. For example, advertising — we offer interactivity to our ad partners. If you see an ad you’re interested in, like a car ad, you can browse, or do something simple like press a button and send me a text with an offer. So, we experiment with that type of interactivity because it doesn’t get in the way of the viewing experience. If you want to get a free coupon because you’re interested in a commercial, press a button, you can do that.

One of our main goals as a platform is to help you find content that you want to watch. Things like universal search — where you can search across services for an actor or a movie — and get information about if something is free on one service or you have to pay for it on another, that type of interactivity is something that people love, if it’s around discovering content. So, we’re looking for other ways to help people discover content that’s interactive in its nature.

Is the future of the TV ecosystem one where every device in the home is connected, and I just call out to my TV and it turns on, and I don’t need a remote anymore?

We are incredibly focused on being the best TV experience. That’s why we’re successful. There are a lot capabilities that I think are silly. People generally do not want to talk to their TV to turn it on, for example. Because as soon as you turn it on, you need to pick up your remote control anyway.

Well, you do today, maybe, but theoretically, you don’t have to, right? Why can’t I control everything by voice? Isn’t that easier?

I don’t think people want to talk to their TV. In cases where it’s faster and easier — search, for example — we make voice remotes. We focus on integrating voice into areas where it can really make a difference, like entering your password or your e-mail address or searching — those are things where it’s tedious to tap stuff out on your remote. But other areas, like just scrolling up and down or the power button, it’s actually easier to use the remote.

But I always lose my remote.

Well, that’s why we let you use your phone as a remote. We also have a cool feature called remote finder, where we help you find your remote for you. We’re big believers in remotes. You look at Chromecast, they made a huge bet that people wouldn’t use their remotes. That wasn’t the case.

One topic that investors are curious about is international expansion. Do you have a broad roadmap for international? I know you’re in Canada, Mexico, and Brazil a little bit. But there’s a whole world out there. What’s the plan? Lay it out for us.

We have a strategy. We have tactics and roadmaps which we don’t disclose. But our strategy is pretty straightforward. If you look at the evolution of our business model, first we focus on scale, and once you have enough scale, then you start focusing on monetization. That’s the same strategy we’re talking on international. With most countries, we are still at the building scale stage as opposed to the monetization. There are some exceptions. With Canada, as you mentioned, that’s the first country we entered. Now we sell ads there and we have The Roku Channel there. So we’re doing monetization there.

The other part of our strategy is using the same techniques that have worked for us in the U.S. and applying them internationally. So, focus on growing our smart TV market share — we’re No. 1 in smart TV market share in the U.S. We’re No. 1 in Canada. We’re No. 2 in Mexico. Samsung is No. 1 there, but we’re catching up fast. So focusing on smart TVs and selling low-cost players is how we gain scale. For example, when we launch a player now, we launch it in many countries at the same time as opposed to just the U.S.

If you look at all the countries that we’ve entered, our market share is growing and we’re doing well. Android has been the default choice internationally for a long time because it was the only option. So they’re our biggest competitor. But as we add new countries and start focusing on them, we have an awesome solution. The same reason we’ve won in the U.S. is the same reason we expect to win internationally.

I’ll get into this in the main feature more in depth, but after you started Roku, you worked for Reed Hastings at Netflix for about nine months. Have you modeled your leadership at Roku after him? And if not, has there been anyone you’ve tried to emulate?

My relationship with Netflix is obviously very important to Roku, but I only worked there for nine months. It was nine months. It was a great experience. I’ve got lots of people I respect, but I haven’t tried to copy anyone in particular. I used to read a lot of business books when I was younger, but now I’ve stopped.

Is there a reason you stopped? Did you feel like you just didn’t get any use out of them anymore?

I think you go through different phases in your career. When you first start out, just like when you first start out in college, you just have no clue. So, reading books and talking to people is a good way to learn the basics. As you advance, I think, you become much more experienced, and you find that a lot of the books are not helpful. Like, “oh yeah, if I didn’t know anything, that’s what I’d do,” but that’s not actually the right way to do it.

One of the best things I’ve done to help me build my skills since Roku has grown is to have an adviser — kind of like a coach. He used to be the CEO of a public company. So, when I have issues, I talk to him. That’s David Krall. He was the CEO of Avid. He works one day a week for us being an adviser. Talking to an experienced CEO is helpful.

Describe yourself as a leader.

What I try to do is hire good people — people I want to work with, so there’s a good chemistry and team — and devise a strategy and some high-level goals. I might come up with the strategy or work with the team to develop the strategy, but there will be a strategy. I think I’m pretty strategic. And then, focus on execution, giving people the freedom and whatever they need to do their job. That’s what I spend my time on — hiring and strategy.

Do you expect to be running Roku as an independently traded company ten years from now?

Do you know who your successor at Roku will be?

All public companies have to have a succession plan, so we have one. I focus a lot on developing talent on my team. But often there’s talent outside the company as well. So, I don’t know. I have no plans to leave, but if we were to hire a new CEO, I’d imagine we’d look internally and externally.