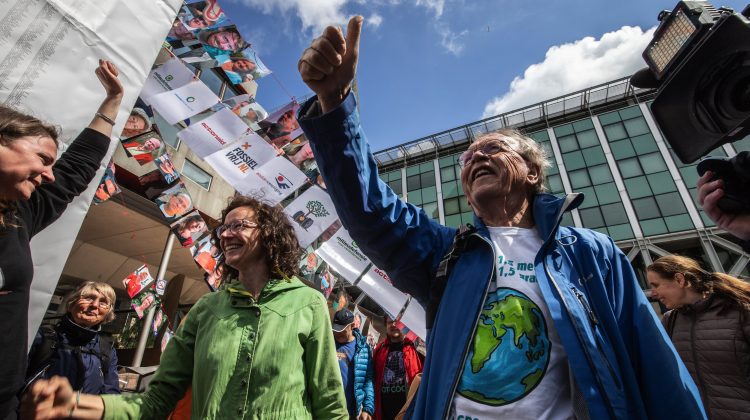 Members of the environmental group MilieuDefensie celebrate the verdict of the Dutch environmental organisation’s case against Royal Dutch Shell Plc, outside the Palace of Justice courthouse in The Hague, Netherlands, on Wednesday, May 26, 2021. Shell was ordered by a Dutch court to slash its emissions harder and faster than planned, dealing a blow to the oil giant that could have far reaching consequences for the rest of the global fossil fuel industry.

LONDON — Big Oil is likely to face an exponential increase in climate lawsuits over the coming years, a trend that analysts say is reminiscent of activists turning to the courts to take on the tobacco industry.

The prospect of a rising tide of climate litigation cases against heavy emitting businesses comes shortly after a landmark courtroom defeat for Royal Dutch Shell.

The Hague District Court on May. 26 ordered the Anglo-Dutch oil giant to set more ambitious emission reduction targets. It also said Shell is responsible for its own carbon emissions and those of its suppliers, known as Scope 3 emissions. A Shell spokesperson said at the time that the company fully expected to appeal the court’s “disappointing” decision.

To be sure, the ruling marked the first time in history that a company had been legally obliged to align its policies with the Paris Agreement and reflected a watershed moment in the climate battle.

“You will see the ruling on Shell being used as precedent to add new pressure,” Elizabeth Hypes, senior environment and climate change analyst at risk consultancy Verisk Maplecroft, told CNBC via telephone.

A report published by Verisk Maplesoft last month found that businesses associated with oil and gas, coal and electric utilities were currently most at risk of climate liability lawsuits. They described this finding as “unsurprising” since 83% of global greenhouse gas emissions resulted from fossil fuels in 2018.

Electricity pylons are seen in front of the cooling towers of the coal-fired power station of German energy giant RWE in Weisweiler, western Germany, on January 26, 2021.

Since the turn of the century, more than 2,000 climate litigation cases were found to have been filed in a trend that is widely expected to have global implications for carbon-intensive companies. The U.S. and EU account for 90% of climate-related lawsuits since 2000, but cases are starting to move into new territories — such as Argentina, South Africa and India, among others.

“I think definitely the momentum is one aspect of it and that we are actually seeing more successful cases, but I also think you see a lot of cases that are just incentivizing or motivating others to follow suit — even if they are not successful,” Franca Wolf, Europe and Central Asia analyst at Verisk Maplecroft, said on the same call.

“The amount of media attention that a lot of these cases get, it is a great way to pressure governments and force corporations [to change],” Wolf said.

This year alone, more than 70 climate lawsuits have been filed worldwide, according to data compiled by Verisk Maplesoft, significantly higher than the number of litigation cases filed during the first six months of previous years.

“We are seeing a lot more cases being picked up in jurisdictions outside of the U.S. and the EU and that’s just going to see those numbers grow exponentially,” Hypes said, reflecting on the fact that 60% of cases outside the U.S. had resulted in favorable outcomes for the prosecution.

Analysts believe this is merely scratching the surface of what is to be expected in the future — drawing parallels to the so-called tobacco trials of the 1950s and 1960s.

Billions of dollars lost, it hit their bottom lines, it changed regulation … It’s a good proxy for what might happen in the U.S.

Decades before the oil and gas industry sought to sow doubt over the necessity of climate action, tobacco companies attempted to undermine the emerging links between smoking and lung cancer.

Policymakers were seen to be reticent to act against the tobacco industry at the time and legal challenges were unsuccessful for years. That is, however, until a landmark ruling in 2006 found U.S. tobacco firms guilty of fraudulently misrepresenting health risks associated with smoking.

“Ultimately, why I think it is most important to draw that parallel is because it started out slowly, with some cases here and some cases there … and then over time, really building momentum into these massive trials that really changed the landscape for tobacco companies,” Wolf said.

Hypes agreed. “The repercussions from that were significant. Billions of dollars lost, it hit their bottom lines, it changed regulation,” she said. “It’s a good proxy for what might happen in the U.S.”

Gas pumps sit empty at an Exxon gas station in Charlotte, North Carolina on May 12, 2021.

In addition to lawsuits targeting carbon-intensive companies, governments are also being tasked with increasing the regulatory burden on companies in order to protect the rights of future generations.

Guyana’s government is being taken to court by two citizens that pushes back on U.S. oil giant ExxonMobil’s plans to boost fossil fuel production off the South American country’s coast. The case, filed last month, says the expansion violates Guyanese citizens’ rights to a healthy environment. The lawsuit is the first in the Caribbean to challenge fossil fuel extraction on constitutional grounds.

In Europe, meanwhile, climate activists and environmental NGOs have asked the European Court of Human Rights to rule against Norway’s plans for more oil drilling in the Arctic. The case argues it deprives young people of their future.

Nonetheless, it is the Dutch court ruling against Shell that is thought to have emboldened climate activists into taking on corporates directly.

The risks of a surging number of climate litigation cases for businesses include a changing regulatory environment, significant reputational damage and the expanding nature of the cases being brought.

It comes amid a crucial decade for climate action, with policymakers and business leaders under intensifying pressure to deliver on promises made as part of the Paris Agreement.

Among the new arenas of climate litigation risk, analysts say, are fraud and consumer protection liabilities, planning and permitting laws and environmental performance. Some in the legal community are also calling for “ecocide” to be recognized as an international crime. This umbrella term refers to all forms of the mass damage of ecosystems, from industrial pollution to the release of micro plastics into the oceans.

A man paddles on a boat as plastic bags float on the water surface of the Buriganga river in Dhaka on January 21, 2020.

A panel convened by the Stop Ecocide Foundation published a legal definition of ecocide on Tuesday, seeking to pave the way for acts of environmental destruction to be incorporated into the International Criminal Court’s mandate. It could see ecocide established alongside war crimes, genocide and crimes against humanity in the Hague.

Jojo Mehta, co-founder of the Stop Ecocide campaign, told CNBC she expects the crime of ecocide to be established at the ICC within five years.