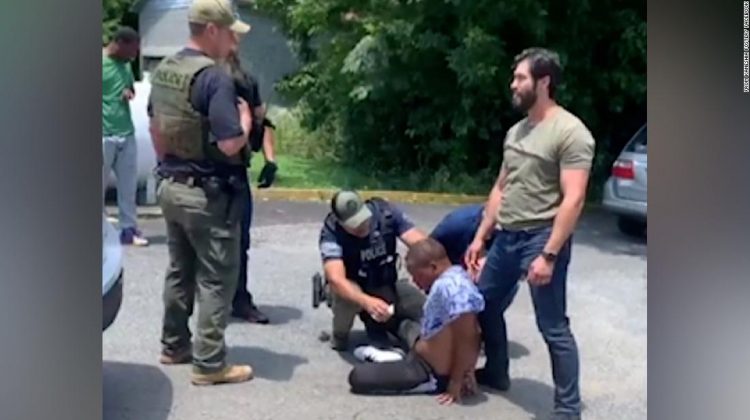 Rock Hill Police Chief Chris Watts said at a press conference Thursday that the South Carolina Law Enforcement Division has been asked to conduct an investigation. There also is a Rock Hill Police Department internal investigation and two officers have been placed on administrative leave, he said.

The video, which was streamed on Facebook Live, shows the arrests of Ricky Price and Travis Price by multiple law enforcement officers.

“The use of force that we see in the video is a perfect example of why African Americans today in certain parts of America are afraid of police,” an attorney for the men and their family, Justin Bamberg, told CNN on Thursday. “There’s no justification for doing that to anybody.”

Officers from the Rock Hill Police Department Violent Crimes Unit and agents from the Department of Homeland Security were conducting surveillance on Ricky Price on Wednesday afternoon when they pulled him over for an illegal turn and lane change, according to a statement from Rock Hill police.

Ricky Price pulled into a gas station where police said he called his brother, Travis Price, from inside the car.

Police found two bags of marijuana hidden in the driver’s door panel and a 9mm pistol in the back seat of the car, according to the statement. Officers later found a bag containing crack cocaine where Ricky Price was seated, the statement said.

Ricky Price was then put in handcuffs and placed under arrest, police said, but Travis Price tried to get closer to his brother to reach for belongings that officers were removing from Ricky Price during his arrest and “used his body to bump the Officers backward.”

Travis Price was told by police he was under arrest for interfering and physically contacting officers, according to police, and pushed him against a large gas tank only after he shoved them and would not put his hands behind his back.

Officers took off Ricky Price’s handcuffs to remove jewelry he said he wanted removed, police said, when he attempted to flee and threw punches at them. One of the punches struck an officer in the face, according to the police statement.

In the video, one officer can be seen apparently punching Ricky Price as they struggle on the ground. According to police, the officer was punching his upper thigh “on the Common Peroneal Nerve to gain compliance,” but when that didn’t work, the officer hit him in the nose, causing him to bleed.

The woman who shot the video can be heard saying Ricky Price was tased, but police said that officers did not deploy any weapons or use Tasers on either man.

Ricky Price was charged with possession with intent to distribute crack cocaine, possession with intent to distribute marijuana, carrying a pistol unlawfully, unlawful possession of a firearm by a person convicted of a violent offense, and resisting arrest, according to police. He was denied bond Thursday, according to attorney Bamberg, and is in the local jail with a broken nose, two black eyes and is in a wheelchair because he is having trouble walking.

Travis Price was charged with hindering police. He was granted a $1,000 bond, Bamberg said.

Protests and investigations after the arrests

“We have met with local and state leaders, and we’ll continue to do so moving forward. Rock Hill Police Department recognizes the pain and frustration our community feels over this incident. We want the public to know that their First Amendment rights to assemble will be protected. Rock Hill Police Department does have an obligation to protect the community, the property and the people protesting and the officers. Peaceful assemblies will always be welcome,” Watts said.

Officers were wearing body cameras during the arrest, Watts said, but the footage will not be released until the Price family is able to view the footage and other investigative procedures are followed.

Demonstrators protested for the second night in a row on Thursday. There were no arrests made during demonstrations on Wednesday, according to Lt. Michael Chavis, Rock Hill Police Department Public Information Officer, yet eight individuals were arrested late Thursday over the course of three hours.

Rock Hill NAACP President Norma Gray called on the public to protest peacefully and said that there is more to what happened during the arrest than what is seen on the Facebook video.

“What was happening to Ricky that caused them to bring him to ground was not captured, and that is the footage that needs to be analyzed so that the public can be aware of what caused that violence scuffle,” Gray said.

“Allow the Rock Hill NAACP to do what we’ve been doing, working hand in hand with Chief Watts for seven years. We called for transparency, and we’ve been given transparency. Allow us to be transparent with you as we are given that information. And so again we’re asking for calm as you protest. Use your civil rights but do it in calm.”