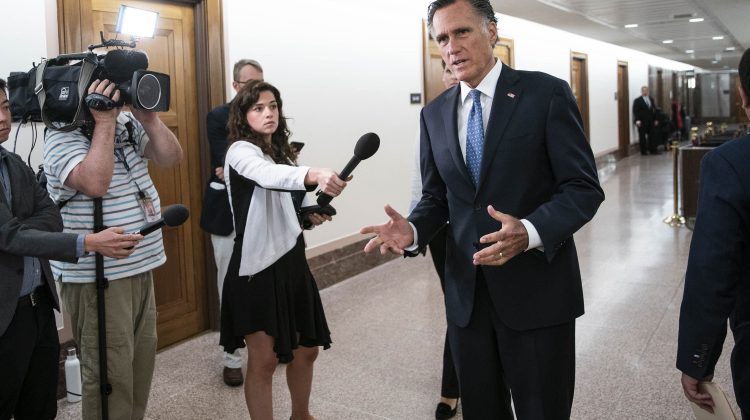 Senator Mitt Romney, a Republican from Utah, arrives to a luncheon on Capitol Hill in Washington, D.C., on Wednesday, June 16, 2021.

Eleven Republican senators support a bipartisan infrastructure framework, enough for a potential bill to get through the chamber if all skeptical Democrats back it.

In a statement Wednesday, 21 Democratic and GOP senators endorsed the roughly $1 trillion proposal, which would not raise taxes on corporations or wealthy individuals. The plan would revamp transportation, broadband and water, but would not meet many Democrats’ goals for investments in clean energy and social programs.

“We look forward to working with our Republican and Democratic colleagues to develop legislation based on this framework to address America’s critical infrastructure challenges,” the senators said in a statement.

The proposal serves as the last sustained effort to strike a bipartisan infrastructure deal before Democrats move to pass legislation on their own. A smaller bipartisan group of 10 senators who drafted the plan has tried to win support on Capitol Hill but has not yet earned the blessing of congressional leaders or the White House.

A handful of liberals in the Senate have threatened to vote against the bipartisan deal, which they say does not do enough to fight climate change or income inequality. If any Democrats oppose the plan, more than 10 Republicans would need to back it for it to hit the 60-vote threshold to pass legislation in the Senate.

Some Democrats have suggested their party could approve a physical infrastructure plan with Republican support if skeptics get assurances their priorities will be addressed later. Democrats could then move to pass broader investments in child and elder care, green energy, education and health care on their own through budget reconciliation.

Democrats have to balance concerns from both flanks of their party. The most conservative Senate Democrat, Joe Manchin of West Virginia, has stressed that he wants to pass an infrastructure bill with GOP votes.

Senate Majority Leader Chuck Schumer said Democrats would start the process of drafting a budget resolution Wednesday even as the bipartisan talks proceed. He said a proposal folding in social and climate programs included in President Joe Biden’s American Jobs Plan and American Families Plan “will be considered by the Senate even if it does not have bipartisan support.”

“There are many items to discuss, but one subject is not up for debate: I will instruct members to ensure that any budget resolution puts the United States on track to reduce carbon pollution at a scale commensurate with the climate crisis,” Schumer, of New York, said earlier Wednesday.

Leaving Geneva, Switzerland, after meeting with Russian President Vladimir Putin on Wednesday, Biden said he had not seen the details of the bipartisan plan. However, he noted that his chief of staff, Ron Klain, believes “there’s some room” for a deal with Republicans.

White House advisors met Wednesday with the five Democratic senators who negotiated the proposal. In a statement to NBC News after the meeting, White House spokesman Andrew Bates said the officials “found it productive and encouraging.”

“They look forward to briefing the President tomorrow after his return to the White House, and continuing to consult with Senators and Representatives on the path forward,” he said.

Paying for the infrastructure plan could be an issue. Republicans have insisted they will not touch their 2017 tax law, which cut the corporate rate to 21%. Biden wants to hike the corporate tax to at least 25%.

The president has also promised not to increase taxes on anyone making less than $400,000 per year. A possible revenue raiser in the bipartisan plan — tying the gas tax to inflation — could effectively break his pledge.