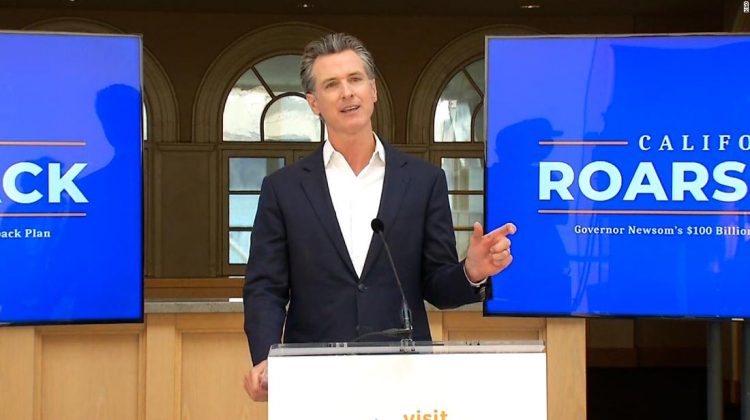 The state has the cash to meet the need. It got more than $27 billion from the American Rescue Plan, which passed Congress in March — and is enjoying an unexpected budget surplus boosted in part by capital gains tax revenues from wealthy California residents.

About $350 billion was provided to state and local governments by the American Rescue Plan, and Congress gave broad flexibility on how to use the funds.

Like Newsom, many governors across the country have proposed how they want the federal money to be spent in their states — but need legislators to sign off. Those plans should be finalized soon as fiscal years come to an end and lawmakers approve their annual budgets. But states don’t have to spend the money until the end of 2024 and may wait before allocating all of the funds.

Florida Republican Gov. Ron DeSantis, who’s up for reelection next year, called for using the money to send $1,000 bonuses to first responders and teachers — provisions that made it into the state budget approved earlier this month.
Many of the governors’ proposals include one-time expenditures — like water and broadband infrastructure investments — rather than standing up programs that would need to be funded after 2024, said Brian Sigritz, director of state fiscal studies at the National Association of State Budget Officers.

Kentucky and Indiana are two states that finalized annual budgets soon after the American Rescue Plan was passed. Both tapped some of the federal money for infrastructure projects. Kentucky used it to pay off a federal loan taken for unemployment funds during the pandemic as well as send additional rental assistance money to Lexington and Louisville. Indiana created a $500 million regional economic grant program aimed at helping develop the workforce.

The California secretary of state confirmed in late April that proponents of the Republican-led effort to recall Newsom had gathered the more than 1.4 million valid signatures that were needed to initiate the recall. But state officials have yet to officially call or schedule the election because there are a number of bureaucratic steps that must be completed.

The recall has been fueled by anger over restrictions the governor put in place to curb the spread of Covid-19 throughout last year and during an alarming surge in cases during the winter holiday months. California was one of the last states to get children back to school.

Only four in 10 likely voters said they would vote to recall Newsom in a poll released earlier this year by the Public Policy Institute of California. Former Olympian, reality star and transgender activist Caitlyn Jenner is set to run against him.