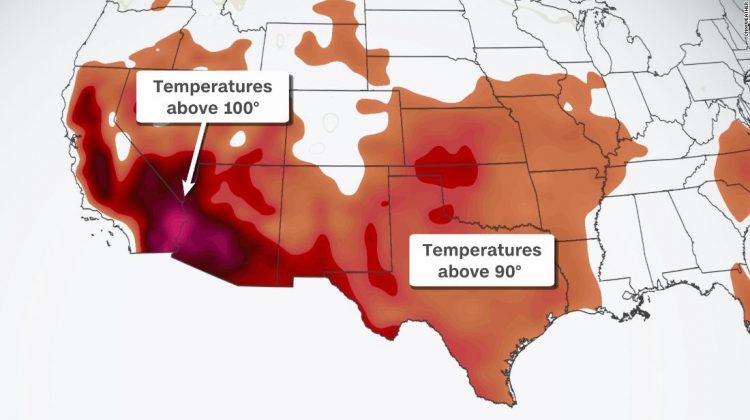 “The prolonged heat wave across the southwestern US will continue for another couple days, but a cooling trend is near,” says the National Weather Service (NWS) office in Phoenix.

In the Southwest, temperatures will start to gradually decrease after days of record heat. Phoenix broke their record for consecutive 115 degree days, recording five days in a row – records date back to 1895 according to the NWS.

On Sunday, highs will still be 10 to 15 degrees above average for the southwestern US. The desert regions of the Southwest including Phoenix, Las Vegas, and Palm Springs will continue to have temperatures above 100 degrees. Flagstaff and Santa Fe, which are higher in elevation, will be in the low to mid-90s.

This extreme heat combined with the dry and breezy conditions will continue to fuel the risk for wildfires, especially in the Four Corners region.

The hot air will build into the Northwest on Sunday, however. High temperatures in this region will be in the 80s and 90s across inland locations of Washington and Oregon while coastal sections and the higher elevations will be a touch cooler.

Most of these areas in the Pacific Northwest will have highs 10 to 20 degrees above normal.

Monday will be even warmer in the Northwest, with widespread highs in Washington and Oregon around 20 degrees above average. Temperatures will be in the 90s to around 100 degrees both east and west of the Cascade Mountains.

Portland, Oregon, could break their daily record high temperature on Monday, with a forecast of 96 degrees. The record for the date is also 96 degrees set in 1992.

In the Southwest, temperatures will fall even more, with highs now only around 5 degrees above average.

In Las Vegas, temperatures have been above average for more than a week. The last time it was “cool” was on June 11 when the high was below the century mark of 100 degrees.

That will change beginning Tuesday, as “cooler” temperatures spread throughout the western third of the country.

Heat relief will be short-lived

The Northwest will remain warm Tuesday while the Southwest begins a brief stretch of near-normal temperatures mid to late week.

Much of California could actually be below normal by Tuesday, especially at the coast where it could be 10 to 15 degrees below average.

By next weekend, we anticipate another warmup to start across the western US. This next warmup is not expected to feature temperatures up to the magnitude of this past week’s but any time the temperature is above average this time of year it is going to be hot.

A ridge of high pressure is expected to dominate the weather pattern again, similar to how it did last week. “This should lead to another warming trend by next Thursday or Friday with (model) guidance now showing a return to 109-113 degree highs by Friday,” says the NWS in Phoenix.