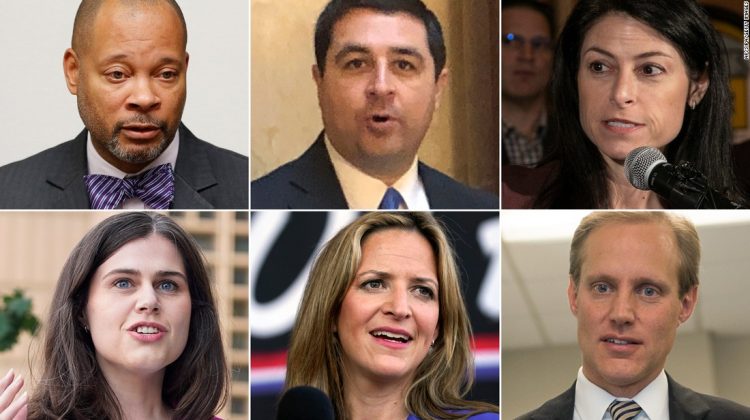 It also intends to engage in races in Florida, Texas, Georgia and Arizona — states where Republican-controlled legislatures also have passed or advanced bills that reduce access to the ballot or seek to seize power from election officials and put it in the hands of lawmakers or administrators of their choice.

The GOP’s legislative moves mean voting rights advocates “must more vociferously fight to protect every American’s voice and vote,” Tiffany Muller, the president of End Citizens United and Let America Vote, said in a statement. She said the incumbents her group is endorsing “consistently stood up to corruption, protected voting rights, and are holding the line to ensure our elections are safe, fair and accessible.”

The organization has not disclosed how it intends to spend the $7 million, but it typically uses a mix of mailers, digital and traditional advertising and grassroots outreach in its campaigns.

Attorneys general and secretaries of state are on the ballot in more than two dozen states next year.

State election chiefs from both parties have faced verbal abuse and threats, following the 2020 election — as former President Donald Trump spread falsehoods of a “rigged” election. Although there’s no evidence of widespread wrongdoing that could have changed the election’s results, Republicans lawmakers in key swing states have raced ahead with laws they say will shore up election integrity.

Democrats and voting rights groups say the measures are aimed at suppressing votes in 2022. Additionally, they argue that bills seeking to curb the power of secretaries of state and other election officials could lead to partisan meddling when it’s time to count votes and certify results.

The States United Democracy Center, a bipartisan group founded to advance fair elections, has tallied at least 216 bills in 41 states that would criminalize the actions of election officials, give legislators more power over the running of elections or otherwise interfere. Two dozen have become law to date.
Last week, GOP lawmakers who control Arizona’s Legislature voted to strip Democratic Secretary of State Katie Hobbs of her authority to oversee election-related lawsuits and gave that power to the state’s Republican attorney general.

The ban would expire on January 2, 2023, when the offices of secretary of state and attorney general could switch party control after the 2022 election. Hobbs is running for governor; Attorney General Mark Brnovich is running for the US Senate.

Hobbs has sharply criticized a GOP-ordered and problem-ridden “audit” of the 2.1 million votes cast in Maricopa County, Arizona.
In Michigan, meanwhile, a Republican lawmaker has introduced a bill that calls for an audit of 2020 results in the state — despite the secretary of state concluding that no fraud or foul play occurred in last year’s election. Last week, the Republican-led state Senate Oversight Committee affirmed there was “no evidence of widespread or systematic fraud” in that election.

In a statement about the endorsement, Benson pledged to “continue fighting so every American knows the truth: The 2020 election was the safest and most secure in our state and nation’s history.”