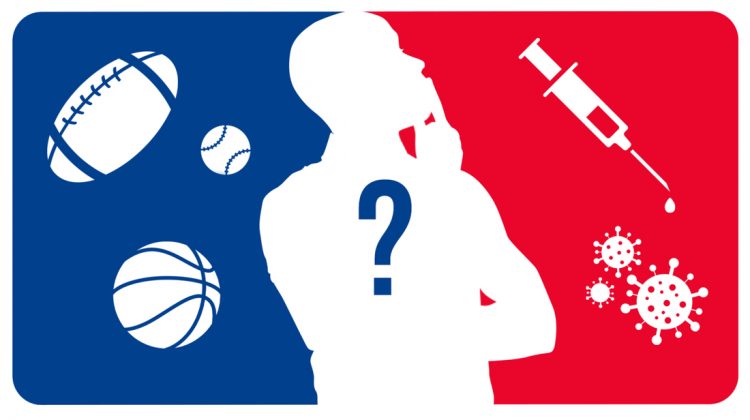 Now, like communities across the country, some sports teams and players are grappling with another hot-button issue: Vaccine hesitancy.

The leagues are working to increase vaccines to return to some type of pre-Covid normalcy, and they often want to lean on their star players — among whom health officials call “trusted messengers” — to encourage vaccinations while offering incentives such as relaxed Covid protocols for vaccinated players.

Some pro athletes have been more than willing to roll up their sleeves and post about it on social media, but others are still questioning, resistant or hesitant, putting them at odds with the pro-vaccine messaging marketed by the leagues.

Star athletes are often the face of a franchise or league, and endorsement or hesitancy can sway the minds of tens of thousands of uncertain fans, according to Dr. Jonathan Fader, sport and performance psychologist.

“The sports world is really a microcosm of our larger society,” said Dr. Jarrod Spencer, sports psychologist and author of “Mind of the Athlete: Clearer Mind, Better Performance.”

The US is at a point where every shot in an arm could make a difference in overcoming the pandemic and ensuring a return to normalcy. The White House said Tuesday it will fall short of President Joe Biden’s goal of getting 70% of adults in the US with at least one shot and 160 million Americans fully vaccinated by July 4 but is on track to hit that number by mid-July. It wants to focus on young adults, particularly those 18 to 26 years old, who have a lower vaccination rate than older groups.
Professional athletes are typically under age 35. The Centers for Disease Control and Prevention on Monday said the intent to be vaccinated is lower among younger adults. Only about half under the age of 30 said that they had been vaccinated or plan to do so, a CDC study found. And for many, experts say, it may not be a priority.
Though the vaccine has been proven safe, those who are hesitant about the vaccine list not knowing the long-term effects, government overreach and a simple lack of desire to get one, experts say. This has led to political, ethical and moral debates about vaccinations.

CNN examined the protocols for the NBA, NFL and MLB, and here is how they — along with their respective athletes — have been handling vaccinations and Covid protocols:

The leagues are promoting vaccines with stars’ help

The NBA, NFL and MLB have said 85% is the magic number when it comes to deciding whether a team is fully vaccinated.

Any team that reaches the 85% threshold for players and staff can relax protocols, the leagues say. All 32 NFL teams have players and staff that are 90% vaccinated, according to league spokesman Brian McCarthy.

MLB announced on June 25 that 23 of the 30 teams have reached the 85% threshold. The NBA did not have numbers for how many players or staff had been vaccinated, but both leagues do release weekly Covid-19 testing figures.
The NFL is the only of the three leagues to announce tier 1 and 2 employees — coaches and anyone that has direct contact with players — have to be vaccinated unless there is a religious or medical reason. The NBA recently announced fully vaccinated coaches no longer have to wear masks during games. None of the leagues require athletes to get vaccinations and there are no exact numbers on those who have.

The leagues have made PSAs featuring legends and social media posts with current players to encourage fans and others to get vaccinated.

“I just arrived to get my Covid shot, and this is one shot I won’t block,” retired NBA legend Bill Russell said in a YouTube video.
MLB launched its “Vaccinate at the Plate” initiative June 4 to incentivize vaccine among fans, where they’ll receive a free ticket to a game if they get a shot at the event.
In April, Detroit Tigers first basemen Miguel Cabrera teamed up with Gov. Gretchen Whitmer to promote vaccinations through the Protect Michigan Commission.

“Right away, I said yes, because I think when you have the vaccine, it’s very helpful for you,” Cabrera told MLB.com. “Everybody has to have the vaccine to get better and get all this behind us and be normal again. I’m tired of this.”

“It’s to each their own. I recommend it,” Barrett said. “I don’t know why people wouldn’t get it. But whatever makes you comfortable, whatever helps you sleep at night, you do that. But I would like for 85% of the team to be vaccinated.”

Despite support for the vaccine from many pro athletes, others have been hesitant because they feel there’s a lack of information about its long-term effects.

“I’m not a fan of it at all,” said Montez Sweat, a Washington Football Team defensive end. “I probably won’t get vaccinated until I get more facts and that type of stuff.”

The NBA and NFL — and their respective players unions — told CNN they’ve provided players with ample information on the vaccine and the virus itself.

“The vaccine has proven to be the most effective tool in combating the COVID 19 pandemic. We will continue to provide the best data and information available and encourage those currently hesitant to get vaccinated,” an NBA spokesperson told CNN.

“We’ve held informational sessions with the clubs and players at their facilities and have also provided on-site opportunities to get vaccinated,” said McCarthy, the NFL spokesperson. “These sessions have included expert speakers such as Dr. James Hildreth of Meharry Medical (College). Teams have brought in additional experts.”

Dr. Anthony Fauci, director of the National Institute of Allergy and Infectious Diseases, acknowledged to radio station WAMU’s “1A” that athletes, like others, feel they need good information. Fauci said officials need to not give up on trying to vaccinate people just because they have concerns.

“Many people who don’t want to get vaccinated are not necessarily core anti-vaxxers, they just have … legitimate questions that need to be answered,” Fauci said.

“Some of it’s good, some of it’s bad. I’m not sure if these guys watch television, the news, as much as I do to try to gather as much information,” Rivera said.

Spencer, the sports psychologist, told CNN that athletes may be getting information from spouses, significant others and extended family.

“For the athletes themselves, those conversations with the significant others are really powerful, but who is educating them?” he said.

The NFL Players Association on June 10 held a media call on which medical director Dr. Thom Mayer summed up the attitude about vaccines among athletes:

“I’ll say what our players say, they’re grown-ass men. You give them the grown-ass facts and they’ll make a grown-ass decision.”

That same day, Tamp Bay Buccaneers head coach Bruce Arians told reporters he has not spoken with anyone who has resisted vaccines.

“They’re just too lazy to get one,” he said.

While some athletes require more information and others are adamant about getting vaccinated, some have said they will not.

Golden State Warriors forward Andrew Wiggins told NBC Sports in March he wasn’t getting vaccinated unless he’s forced. CNN has reached out to Wiggins.
Los Angeles Dodgers pitcher Trevor Bauer told the Los Angeles Times in March that vaccines are a personal choice. This sentiment was echoed by Buffalo Bills quarterback Josh Allen in May, who at the time was still debating whether to get vaccinated. CNN has reached out to both players.
And then there’s Beasley, the Bills receiver, who said in a series of tweets in May and earlier this month that even if he’s not vaccinated, theoretically he couldn’t pass anything to a vaccinated person. He said his thoughts on not wanting to get vaccinated or not wearing a mask don’t make him a bad person.

“Fine me if you want. My way of living and my values are more important to me than a dollar,” Beasley, 32, tweeted June 18. “If I’m forced into retirement, so be it.”

And on the spouse front, Bills safety Jordan Poyer’s wife, Rachel Bush, has been vocal about having the choice to wear masks or get vaccinated.

“I could write y’all a whole list of things you should be concerned with health wise before worrying about if you’re going to get covid from someone who isn’t vaccinated,” she tweeted.

Spencer tells CNN anxiety and fear of the unknown may contribute to vaccine hesitancy among athletes. The long-term implications of the vaccine are still unknown, he said.

“Many of them feel like the tradeoff right now is very much in favor of not getting the vaccine,” Spencer said, adding that it would be beneficial to the fans to see a team support a player who chose to not get vaccinated because it would demonstrate the freedom and support of making a choice about vaccinations. “That would really do wonders for the city in which they perform.”

Fader told CNN what athletes want more than anything is to return to normal, but they also want their concerns heard and understood.

No matter if athletes are excited or extremely nervous about the vaccine, Fader said, if coaches, teams and organizations can show them they care about why they don’t want a shot in the arm, they’re more likely to hear the messaging about why they should.

What happens if players don’t get vaccinated?

Players who choose not to get vaccinated, for whatever reason, will still need to adhere to league and team protocols.

Unvaccinated players will still need to adhere to some of these protocols. They are subject to daily tests, must have family or other visitors tested before seeing them and are subject to capacity limits in training areas.

Those who do not follow protocols, whether vaccinated or not, will face fines, suspension or other disciplinary measures, according to all three leagues.

Players have already faced fines for breaching protocol, many of whom attended social events that are prohibited.

Dallas Mavericks forward Kristaps Porzingis, Brooklyn Nets guard James Harden (who at the time was playing for the Houston Rockets) and superstar LeBron James have all been found to have breached NBA protocols. Porzingis and Harden were fined, but James was not.
The Covid protocols were on full display during the NBA playoffs this year when Phoenix Suns guard Chris Paul was sidelined indefinitely for a positive Covid-19 test, according to the NBA. Suns head coach Monty Williams declined to answer whether Paul was fully vaccinated, and it is unclear if Paul received the vaccine.

Paul missed Games 1 and 2 of the Western Conference Finals when the Suns played the Los Angeles Clippers. He returned to play on Thursday.