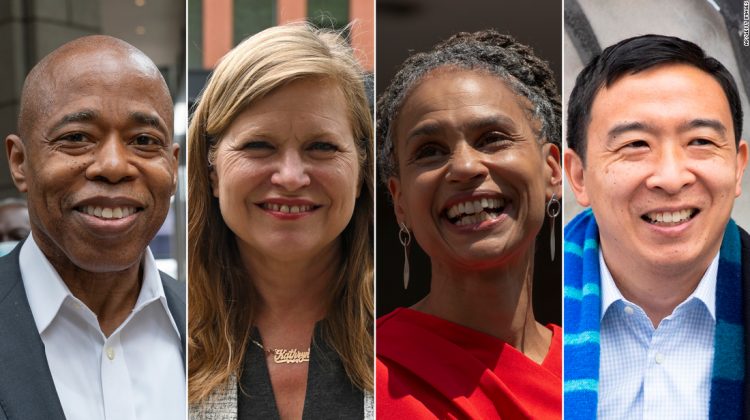 Up and down the ballot, in races for mayor, comptroller, five borough presidencies, dozens of open city council seats and district attorney jobs in Manhattan and Brooklyn, New Yorkers are poised to send a signal that resonates beyond the city limits — to Democrats across the country looking to its broad and diverse electorate for a glimpse into the future of the party.

Adams, who has run on a law-and-order message mixed with a commitment to police reform, is believed by many to be the frontrunner going into primary day, but a combination of sparse polling and the introduction of ranked-choice voting means the outcome is still very much in doubt. Yang appeared to sag as the race dragged on, following a buoyant entry in which he dominated the headlines and overshadowed the lesser known hopefuls. But that early advantage also invited intense scrutiny and persistent questions over his lack of experience.

The desire for a steady, trained hand helped key Garcia’s rise — which got a massive boost when the New York Times editorial board endorsed her six weeks ago. She is known, from years in government, as a sharp technocrat with deep knowledge of the city and the levers that make it work. Her eleventh hour alliance with Yang — they campaigned together over the weekend and on Monday, with Yang calling on his supporters to rank her second on their ballots — could help broaden her appeal. (Garcia has not quite returned the favor, saying her ballot was private and refusing to explicitly encourage her own supporters to rank Yang.)

Wiley represents progressives’ best hope to retain the keys to City Hall. The left spent most of the campaign split among her, New York City Comptroller Scott Stringer and former nonprofit executive Dianne Morales. But after Stringer was accused twice of sexual harassment in alleged incidents from two and three decades ago (he has denied both charges) and Morales’ campaign stumbled amid a staff mutiny, movement leaders ultimately consolidated behind Wiley, who has promised to shave the police budget and beef up social services.

The mayoral contest has laid bare fault lines familiar to Democratic campaigns across the country and in Washington, DC, where the party — a fractious coalition even on its best days — is still negotiating its message and policy priorities during a period of dramatic economic, social and racial upheaval.

Here are five major storylines to watch as early results come in on Tuesday night.

The implementation of ranked-choice voting means that the one certainty on primary day is that New Yorkers will have to wait — for weeks — before most of the biggest races are decided.

At some point after the polls close on Tuesday night, the city’s Board of Elections will release the first-choice numbers from early and in-person voting. But that will only provide a narrow view of the results.

Absentee ballots will not be counted until July 6 and the ranked-choice process doesn’t kick off until June 29. Under the new system, voters are being given the option to rank five candidates. Once the ballots are in, the candidate with the lowest number of votes will be removed from the running and their voters’ second choices reapportioned. The first candidate to cross the 50% threshold wins.

The general consensus among close observers of the campaign and some top operatives is that the eventual winner of the mayoral primary will likely need to clock in above 20% in the initial, election night tally. The same calculus suggests that a lead with anything less than around 35% could easily disappear once the ranked-choice culling begins.

Adams and Yang have waged the most fierce, personal campaign-within-a-campaign of the primary. Adams led the charge of criticism after Yang revealed, early in the running, that he spent some of the worst of the pandemic in a second home outside the city, in upstate Ulster County.

So it was little surprise that Yang laid into Adams when a controversy over whether the Brooklyn Borough president actually lived in the borough he runs blew up late in the campaign. Adams tried to defuse the questions by offering the media guided tours of an apartment he owns in Brooklyn’s Bedford-Stuyvesant neighborhood, but the episode touched off a barrage of new reporting over Adams’ real estate disclosures — or, in certain cases, a lack thereof.

It’s hard to say whether the issue swayed any voters, but its brief capture underscored unresolved issues — about home and loyalty in a pandemic-leveled city — attached to the trauma of the past 15 months and, more narrowly, the bad blood between the two candidates.

That dynamic blew up over the weekend, when Yang and Garcia began to campaign together, with Yang encouraging his supporters to rank Garcia second. Surrogates for Adams charged that the alliance was forged out of a desire to keep a Black or Latino candidate out of City Hall. Though Adams has been less explicit himself in making the allegation, his campaign bundled remarks to that effect from prominent supporters and blasted them out to reporters.

In an appearance Monday morning on CNN’s New Day, Adams first denied that he was suggesting the alliance was racially motivated before doubling back.

“I can say this, that African-Americans are very clear on voter suppression,” Adams said, channeling his supporters’ gripes. “We know about a poll tax, we know about the fight that we’ve had historically.”

That comment appeared to draw in Wiley, who put out a sharp statement later in the morning.

“At a time when this country is seeing real voter suppression laws being enacted, using racism charges to undermine confidence in Ranked Choice Voting is cynical, self-interested and dangerous,” said Wiley, who is also Black.

Wiley went on to criticize Yang over comments he made at a recent debate about the mentally ill, which many considered insensitive or offensive, but ultimately argued that his campaigning with Garcia “is not racist and we should not be using this term so loosely against other candidates at the end of a long campaign when New Yorkers are all coming together to make important choices about our collective future.”

Garcia and Yang, who both dismissed the allegation as ridiculous, continued to appear together on the stump right up through the eve of the election.

Can progressives deliver for Maya Wiley?

It took longer than she might have hoped, but leading progressive lawmakers and organizations ultimately coalesced around the civil rights lawyer in the final weeks of the campaign.

The question now: Did it all come together too late in the game?

Ocasio-Cortez threw in for Wiley on June 5, one week before the start of early voting. Williams came out for Wiley days later. He explained his decision in plain, pragmatic terms soon after at a WFP-sponsored rally.

“One of the reasons I decided to endorse is because the conversation is getting too crazy around public safety,” Williams said in a rebuke of Adams and Yang, who have advocated for stepped-up policing. “And we started feeding the fears that have allowed the worst things to happen to the same communities over and over.”

The late progressive surge undoubtedly provided a sense of momentum — or “Mayamentum” — to Wiley’s campaign, but the long and often tortured process made clear the left’s rising power in city and state politics is no given and that New York, though painted in some of the deepest blues on the US electoral map, is more politically diverse and complicated than many out-of-towners realize.

Running to take on Trump

Longtime Manhattan District Attorney Cyrus Vance Jr., who is on his way out of the office, is expected to leave quite a job to his successor: prosecuting a case against either former President Donald Trump, the Trump Organization or its executives.

No decision has been made yet, but if Vance goes ahead, it will likely fall to the winner of Tuesday’s primary to follow through.

The leading candidates have mostly made clear that they would relish the opportunity.

Alvin Bragg has often noted that he sued the Trump administration more than 100 times during his time as chief deputy in the state attorney general’s office. And Lucy Lang, who has worked in the Manhattan D.A.’s office, has said the office should have pressed forward with a different investigation into the Trump Organization, which was not pursued.

The eight-person field also includes Tali Farhadian Weinstein, the Hillary Clinton-endorsed former counsel to then-Attorney General Eric Holder. Farhadian Weinstein has been more circumspect when discussing her plans for Trump, calling it improper to comment on an ongoing probe.

She has been less shy about spending her own money on the race — Farhadian Weinstein tapped into her personal reserves to inject more than $8 million into her campaign in the closing stretch of the campaign.

While victory for Wiley would represent a stunning comeback story, the story is much different down the ballot. Thanks to a new term-limits law coming into effect this year, there are more than 30 open seats — out of 51 in all — to be filled on the City Council.

The activist left, led by the local chapter of the Democratic Socialists of America, steered clear of the mayoral primary, in part because none of the candidates energized its members and, perhaps more importantly, it saw an unusual opportunity to gain influence — while expending fewer resources — in shaping the city’s legislative body.

Tiffany Cabán, the former public defender who came within a few votes of winning the 2019 Democratic primary for district attorney in Queens, is now the favorite in her council race. She could be joined by five other DSA-backed candidates.

In the comptroller primary, City Councilman Brad Lander — no DSA member, but a longtime progressive champion — has promised to bring transformative change to the job. If there is a true test of progressive power among the citywide races, the comptroller contest might be it. The contest, more than the mayoral primary, will also provide clearer insight into the influence of leaders like Ocasio-Cortez, who backed Lander early on, vigorously campaigned for him and appeared in his commercials.