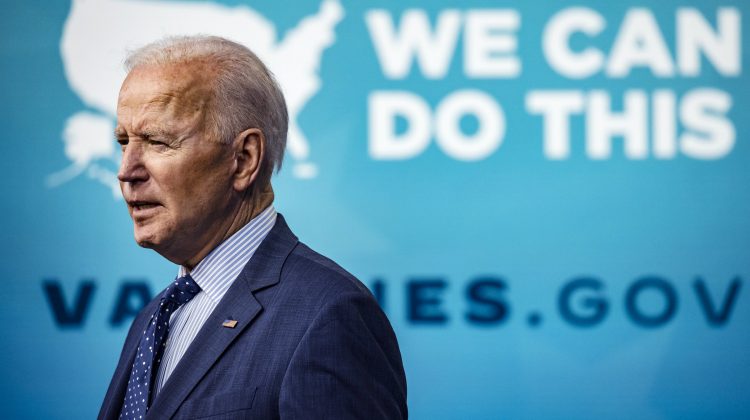 With less than three weeks to go until Independence Day, President Joe Biden’s latest vaccination goals are in jeopardy.

The country is not on pace to hit his two main targets outlined in early May: fully vaccinating 160 million adult Americans and administering at least one shot to 70% of adults across the U.S. by July 4, according to a CNBC analysis of Centers for Disease Control and Prevention data.

About 65% of adults are at least partially vaccinated as of Wednesday, CDC data shows. Roughly 13.6 million would have to receive their first shot over the next 18 days to get that figure to 70%, an average of about 756,000 new vaccinations each day. The U.S., however, is averaging 336,000 newly vaccinated adults per day over the past week.

If the U.S. maintains that latest seven-day average, 67% of adults will be at least partially vaccinated by that day.

When asked about the consequences of missing the 70% target at a press briefing last week, White House chief medical advisor Dr. Anthony Fauci said the Fourth of July would not be the end of the country’s vaccination efforts as the risk of infection and illness remains for those who haven’t gotten a shot.

“If you don’t meet the precise goal and you fall short by a few percent, that doesn’t mean you stop in your effort to get people vaccinated,” Fauci said. “We want to reach 70% of the adult population by the Fourth of July. I believe we can, I hope we will, and if we don’t we’re going to continue to keep pushing.”

Fauci, the nation’s top infectious disease expert, also stressed the importance of vaccination in preventing the Delta variant, which was first identified in India and is rapidly emerging as the dominant strain in the U.K, from taking hold in the United States.

White House Covid czar Jeff Zients told reporters Thursday that the U.S. would cross the 70% mark and “continue across the summer months to push beyond 70%,” but did not specify whether he expects the country to reach that mark by the goal deadline.

Biden’s goal of 160 million fully vaccinated adults is also on track to fall short if the pace of shots does not pick up in the next few weeks. Nearly 142 million adults have completed a vaccination program, on pace to land at around 152 million on the Fourth of July assuming the current pace of daily reported vaccinations holds steady.

When Biden first announced the two goals on May 4, the country was on pace to hit both. But the vaccination rate has fallen in the weeks since, from a seven-day average of 2.2 million shots per day across all age groups on the day of the announcement to 1.2 million per day as of June 16, according to the CDC.

The White House has doubled down on recent efforts to boost the vaccination rate. Biden announced June as a “national month of action” in which his administration would mobilize national organizations, community- and faith-based partners, celebrities, athletes and other influential groups to be part of the vaccination campaign. The White House also asked pharmacies to extend hours for the month of June and partnered with Uber and Lyft to offer free rides to vaccination sites.

States are also offering incentives ranging from free beer to $1 million lotteries to try to convince Americans to get jabbed.

Though the nationwide rate is still about 5% away, 14 states and the District of Columbia have already crossed the 70% milestone. New York is the latest to get there, and Gov. Andrew Cuomo announced Tuesday that the state would lift most of its Covid restrictions as a result.

Other states lag, with 22 of them below the 60% mark. That includes Mississippi, Alabama, Louisiana and Wyoming, which have each reached less than 50% of adult residents with one or more shots.

The U.S. has undoubtedly made progress in fighting Covid, and nationwide case counts are down to levels not seen since the start of the pandemic, which U.S. officials attribute to the country’s vaccination campaign. American life is closer to its pre-pandemic normal than at any point since last March since the CDC’s lifted most of its mask recommendations and begun to ease travel restrictions.

Even so, pockets of the U.S. with low vaccination rates are a risk for the country’s ability to control the pandemic, said Dr. Wafaa El-Sadr, a professor of epidemiology and medicine at Columbia University.

“Once you have an unvaccinated population, that’s a vulnerable population likely to see surges in cases,” she said. Ongoing spread means the potential for new variants to emerge, with the possibility that one will be able to evade the protection offered by vaccines.

“It is valuable to have aspirations and very ambitious targets ahead of us and I think we should do our best to reach those targets,” El-Sadr said of Biden’s July 4 goals. “If we don’t reach them, it doesn’t mean that we accept it as a failure and stop doing what we’re doing. It means we redouble our efforts.”