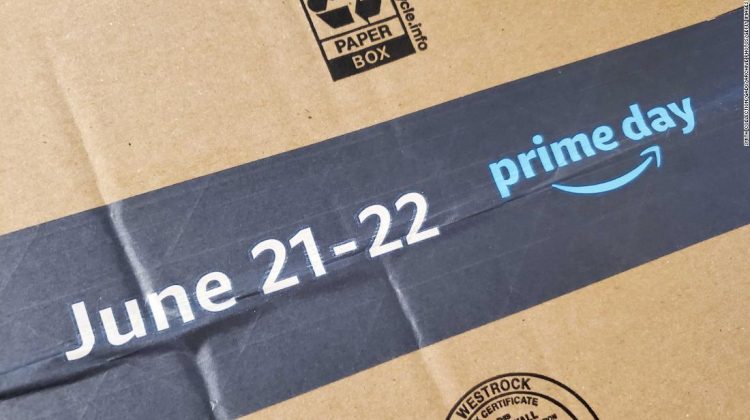 What’s happening: In 2020, analysts estimated Amazon’s Prime Day notched sales of $9 billion to $10.5 billion. The sales rush as the economy reopens could encourage even bigger spending this time around by consumers armed with excess savings. Adobe Analytics thinks spending could reach $11 billion.

Amazon (AMZN) shares have risen in six of the past nine trading sessions, and are now just 1.3% below their all-time peak reached in September 2020.

But there are a few reasons that Prime Day may not help the company’s stock as much as one might expect.

First, there’s the impact of global supply chain disruptions from the pandemic. Some independent sellers interviewed by CNN Business said they can’t offer their typical promotions because they’re worried they might not be able to meet customer demand. They also can’t afford the hit to profits as the cost of moving goods around the world rises.

“I don’t have enough profit margin to do it,” said Ivan Ong, the cofounder of Keababies, which sells baby care and maternity products. Keababies is paying double the price for shipping containers to import products from China compared to a year ago.

These problems come as Amazon is trying to boost the role independent merchants play in the event, which last year included more than 1 million global discounts. Third-party sellers make up close to 60% of Amazon’s $236 billion in annual retail sales.

Amazon shares are also under broader pressure as investors weigh signals from the Federal Reserve that it could raise interest rates sooner than expected.

The concern: As rates rise in the coming years, investors may start to consider parking their money elsewhere. Some are already making this choice.

But it’s clear that Amazon is battling a mood shift — even if its 2021 Prime Day is a success.

The Fed is adding gasoline to the housing market

Despite surging home prices that are rising at the fastest pace on record, the Federal Reserve continues to prop up the housing market by purchasing $40 billion of mortgage bonds each month.

And while the Fed is finally “talking about talking about” removing some of its support, some fear the US central bank is creating another housing bubble as it deliberates, my CNN Business colleague Matt Egan reports.

That’s because the Fed’s emergency strategy is artificially lowering the cost of mortgages, and further boosting prices that already look stretched in many markets.

Of course, the central bank deserves credit for its historic efforts to prevent the Covid recession from morphing into an all-out depression.

Springing into action early last year, the Fed rapidly slashed interest rates to zero, launched emergency programs to unfreeze credit markets and promised to buy a staggering $120 billion of Treasury and mortgage bonds a month. That unprecedented support, along with trillions of dollars of stimulus from Congress and the Trump and Biden administrations, set the stage for a rapid recovery.

But given how fast the economy is rebounding and the fact that inflation is surging, it may be time for the Fed to start tapping the brakes — at least on its bond-buying program.

“House prices are exploding right now. Everything in the housing sector is going up in price,” Jason Furman, a former top economic adviser in the Obama administration, told CNN’s Poppy Harlow. “It probably isn’t the case that the Fed should be continuing to artificially hold mortgage rates down.”

The US travel industry has been experiencing a huge revival, as Americans rush to take the vacations they’ve had to sit out for the past year and a half.

The latest: Royal Caribbean’s Freedom of the Sea cruise set sail from Miami on Sunday evening — the first US trial of Covid safety protocols aimed at getting the sector back on its feet. About 600 employee volunteers who have been vaccinated were on board, as well as a representative from the US Centers for Disease Control and Prevention.

But the return to normal isn’t without complications. American Airlines is canceling hundreds of flights through the middle of next month as the company strives to maintain service amid booming demand.

“The first few weeks of June have brought unprecedented weather to our largest hubs, heavily impacting our operation and causing delays, canceled flights and disruptions to crew member schedules and our customers’ plans,” spokesperson Shannon Gilson said. “That, combined with the labor shortages some of our vendors are contending with and the incredibly quick ramp up of customer demand, has led us to build in additional resilience and certainty to our operation by adjusting a fraction of our scheduled flying through mid-July.”

On Saturday, American Airlines (AAL) had 120 cancellations, and the company is projecting 50 to 80 flight cancelations per day going forward, according to Gibson.

Investor insight: Shares of American Airlines have soared 41% this year, and investors don’t seem spooked in premarket trading Monday. But the strain on operations is a sign of how hard it will be for the airline to get its business running smoothly again.

More data on the hot US housing market is due this week, with existing home sales for May posting on Tuesday and new home sales arriving Wednesday.