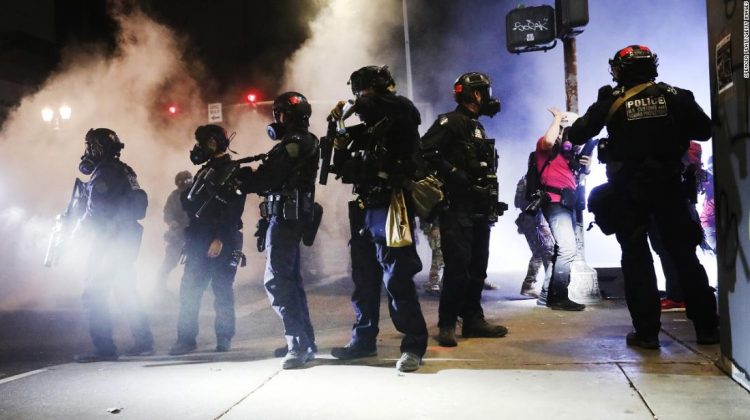 The wholesale resignation of the police department’s Rapid Response Team (RRT) took place after a Multnomah County grand jury handed down an indictment Wednesday charging Officer Corey Budworth with fourth-degree battery. All the officers who resigned their positions on the team returned to their regular assignments.

Budworth is accused of shoving photographer Teri Jacobs to the ground and using a baton to strike her during a protest last August — an incident that was caught on video and posted to social media.

CNN has reached out to Budworth’s attorneys for comment. He was assigned to the department’s Rapid Response Team and had been a member of the unit for four years. The team was deployed during protests last summer ignited by the murder of George Floyd by an officer in Minneapolis.

It’s rare, but not unheard of, for officers to vacate voluntary assignments en masse. It happened in Buffalo last summer under similar circumstances.

In Portland, officers, detectives, and sergeants voted Wednesday night to resign as a group following a discussion about concerns from the team, Acting Portland Police Chief Chris Davis said. He did not go into detail about those concerns, but confirmed the indictment was brought up during the meeting.

The team was built from officers across the department and deployed to protests, and the officers were trained in crowd management and crowd control. It had undergone advanced training to handle public safety at crowd events and natural disasters.

The unit has essentially disbanded, but the officers remain on the force, according to the police department.

“It is my expectation, and the community’s expectation, that the City remains committed to public safety and effective police oversight. City leaders will continue working in partnership with Portlanders, community organizations and police leadership to reform our community safety system,” Wheeler said in a statement.

Davis said the resignations were not just a result of the indictment, but also “tremendous amounts of stress that has been placed on our entire organization and certainly the members or the (Rapid Response Team)” through more than 150 nights of unrest in the city.

“Our entire organization, and not even just our sworn staff but also our professional staff in the last 14 months has been put through something, none of us have ever seen in our careers and at a level, and an intensity that I don’t think any other city in the United States has experienced,” Davis said while committing to focusing on the staff’s well-being.

“The mass resignation from the Rapid Response Team demonstrates the contempt its members feel for even the possibility that one of their colleagues is held accountable for his actions,” he said in a statement. “The refusal to acknowledge and address this wrongdoing goes to the heart of what’s wrong with Portland Police.”

According to the the district attorney’s office, Budworth “unlawfully caused physical injury to another person” in August of 2020 and was charged with one count of assault earlier this week.

In a press release announcing the charges, District Attorney Mike Schmidt thanked officers who “showed up night after night in response to civil demonstrations that have at times turned violent.”

“I have confidence that the (police department) will continue their mission to maintain public safety,” Schmidt said. “In the meantime, my office will continue to focus on the fair and just prosecution of criminal matters. We cannot expect the community to trust law enforcement if we hold ourselves to a lower standard.”

Jacobs filed a lawsuit against the city that contains screen-captured images from a Twitter user named “John the Lefty,” and the video that person posted to Twitter shows an officer pushing Jacobs with his baton, first while she’s standing and then again while she’s sitting on the ground.

Budworth isn’t named in the lawsuit, which alleges two officers assaulted Jacobs: a John Doe 1 who “swung his (baton) like a baseball bat” and an Officer 37 who pushed Jacobs with his baton, first while standing and again once she was on the ground. A law enforcement source said Budworth is the officer who is identified as “officer 37” in the video, which was posted to Twitter and later cited in Jacobs’ lawsuit.

The Portland Police Association described the incident happening during a “chaotic night of burning and destruction” and said it was in accordance with their training and had been reviewed by the Portland police department’s experts.

“Officer Budworth used baton pushes to move a rioter, now known to be Teri Jacobs, out of the area. As (he) cleared (her) from the area to stop her criminal activity, (she) fell to the ground,” according to a statement from the union. “Reasonably believing that she was getting back up to re-engage in her unlawful activities, (he) employed one last baton push to try and keep her on the ground, which accidentally struck (her) in the head. The location of (his) last baton push was accidental, not criminal.”