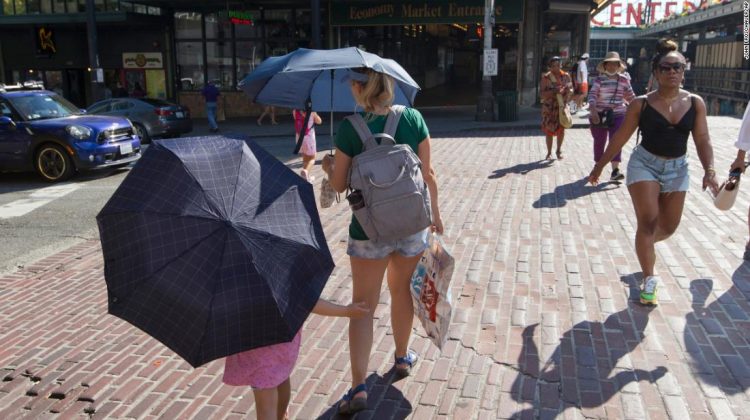 Seattle topped its all-time record high Sunday when thermometers climbed to 104 degrees — so hot that even the normally freezing temperatures above 10,000 feet on Mt. Rainier reached 73 degrees.

Portland set an all-time high of 112 degrees Sunday, but that record will likely be short lived as the forecast high Monday is 115. That would mark the third day in a row where the heat was above 107 degrees.

Temperatures are expected to remain scorching in the area until Tuesday. That is when highs are supposed to dip to 93 degrees, instead of the usual 75 at this time of year.

Lytton, British Columbia, now holds the record for the hottest temperature ever recorded in Canada after topping out at 116 degrees Sunday. It was hotter there than in Abu Dhabi.

Record keeping in these areas dates back to the late 1800s, meaning temperatures like these haven’t been seen in these regions for more than 100 years, said CNN meteorologist Michael Guy.

At Hayward Field in Eugene, Oregon, the United States Olympic track and field trials were suspended Sunday due to extreme heat.

Sunday was the last day of the ten-day of trials and the events were scheduled to resume at 11:30 p.m. EST.

In Portland, all Metropolitan Area Express Light Rail and Streetcar service has been suspended until Tuesday morning due to extreme heat, according to the Tri-County Metropolitan Transportation District of Oregon (TriMet).

“Please be sure to stay hydrated and do not travel, unless for emergencies,” TriMet said in a statement Sunday night.
Bus service is still operational and TriMet said it will not turn away any customers who are unable to pay their transit fare during the extreme heat.

A heat dome acts as an oven over the region

Scorching conditions in the region come from a large ridge of high pressure that has formed a heat dome, which is essentially acting as an oven to bake the region for an extended period of time.

Hot air rises, but the high-pressure acts as an atmospheric lid — forcing the hot air back to the surface where it is heated even further.

“Imagine a swimming pool when the heater is turned on — temperatures rise quickly in the areas surrounding the heater jets, while the rest of the pool takes longer to warm up,” the National Oceanic and Atmospheric Administration (NOAA) said.

The circulations within the heat dome allow temperatures to increase quickly and within a fairly confined region.

Rural eastern Oregon and Washington will feel the heat wave through the Fourth of July weekend, and eastern Idaho will also swelter.

“Right now, we’re looking at 105-110 in Snake Basin of Idaho and the Treasure Valley. We could be breaking all-time records in Boise on Tuesday and Wednesday of next week.” said NWS Boise Meteorologist Korri Anderson.
NWS Boise is urging people not to become another statistic, as heat-related deaths are the number one cause of weather fatalities.

“According to the CDC, over 600 people die each year from heat. It can happen to you,” NWS Boise warns.

CNN’s Hannah Gard and Haley Brink contributed to this report.