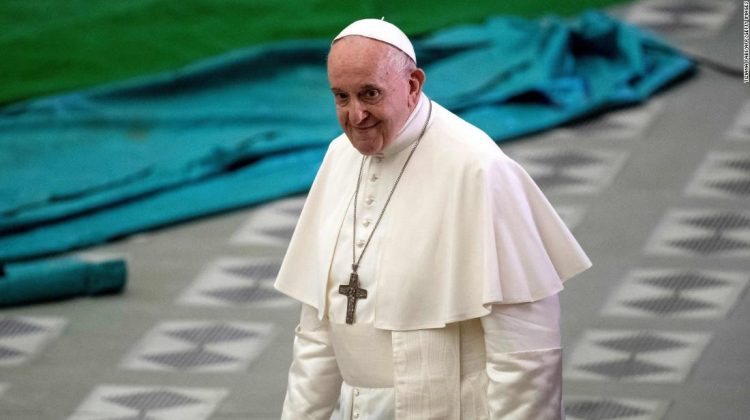 In a handwritten letter to the Rev. James Martin, a Jesuit priest and editor-at-large for America Media, Francis thanked Martin for his “pastoral zeal” and called him a “priest for all men and women.”
“I pray for your faithful, your ‘flock,’ and all those whom the Lord places in your care, so that you protect them, and make them frow in the love of Our Lord Jesus Christ,” the Pope wrote. (Martin shared the original text of the letter and its English translation on Facebook.)
“Moreover, it’s a reminder to LGBTQ people everywhere that God loves them with, in Pope Francis’ words, ‘closeness, compassion and tenderness'” he told CNN in an email.

Martin said he’d written to the Pope to share that his nephew had chosen “Francis” for his confirmation name. In a postscript, he reminded Francis of the Outreach LGBTQ Catholic Ministry Webinar, a conference for LGBTQ Catholics and church leaders who oversee LGBTQ ministries.

Francis wrote back to Martin a day later, the priest said. In his note, he asked Martin to “congratulate [his nephew] on the socks,” a reference to Martin’s nephew’s Pope Francis-themed socks.

“That made me laugh,” the Pope wrote.

He continued: “Regarding your PS, I want to thank you for your pastoral zeal and your ability to be close to people, with the closeness that Jesus had, and which reflects the closeness of God. Our Heavenly Father comes close with love to each one of his children, each and every one. His heart is open to each and everyone. He is a Father.”

“I pray for you to continue in this way, being close, compassionate and with great tenderness.”

Since Pope Francis was chosen to lead the Catholic Church in 2013, he’s taken a more tolerant, if inconsistent, stance toward LGBTQ Catholics than his predecessors have. That same year, when asked about gay members of the clergy, he famously responded, “Who am I to judge?” and said in 2016 that Christians owed LGBTQ people an apology for their historical mistreatment. But he’s also previously claimed “the family is threatened” by the movement for same-sex marriage and once compared gender theory to “nuclear arms.”
Per the Catechism of the Catholic Church, “homosexual acts” are condemned in Catholicism, but homosexuality in itself is not considered a sin. The Church doctrine encourages members to welcome and respect gay parishioners, though it also states that gay members are “called to chastity,” according to the Human Rights Campaign in its assessment of the Church’s stance on LGBTQ issues.
Meanwhile, in the last year, the Vatican has taken strong stances against its LGBTQ members, at times contradicting statements by the Pope. In March, the Vatican announced it would not bless same-sex unions, describing them as sinful, in a note approved by Francis. But in an appearance in a documentary released in October 2020, Francis indicated support for same-sex civil unions, calling gay Catholics “children of God” who “have a right to a family.”
The Vatican this month opposed an anti-homophobia law introduced in Italy’s Parliament, which could require some Catholic schools in the country to adopt state-mandated lessons on tolerance and gender, CNN reported last week.

The Vatican did not immediately respond to a request for comment on the Pope’s letter.

Martin said the message the Pope sent in response to his PS reiterates that “God loves [LGBTQ Catholics] and the Pope cares for them.”

Martin’s work with LGBTQ Catholics began in earnest after the mass shooting at Florida’s Pulse nightclub in 2016. He said he aims to help queer and trans Catholics “feel welcome in what is, after all, their church, too.”
Martin, who was recently profiled for a documentary executive-produced by Martin Scorsese, has been criticized by other leaders within the faith for emphasizing the inclusion of LGBTQ members and contradicting Catholic doctrine. But Martin says that acceptance is baked into Catholicism.

“The church teaches LGBTQ people are created by God and loved by God,” he said. “That’s what I believe, too.”