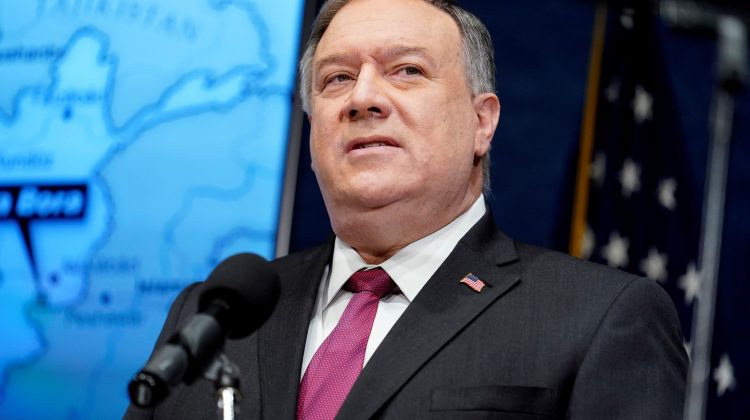 A growing group of Republicans who could run for president in 2024 are making their way to New York to meet with lucrative donors.

Potential contenders who either have or are set to gather with donors in the Big Apple include former Secretary of State Mike Pompeo, Sens. Tim Scott and Marco Rubio and Florida Gov. Ron DeSantis, according to people briefed on the matter and invitations to fundraising events.

Though Scott, Rubio and DeSantis are up for reelection in 2022, raising money for those campaigns could translate into financial support for a 2024 presidential run. Pompeo recently launched the Champion American Values PAC to help Republicans running in 2022, including those in the House and Senate, and these meetings could end up helping him bring in cash for this venture.

Pompeo has been making the biggest push into New York donor circles since the 2020 presidential election ended, according to insiders familiar with the efforts. The sources spoke on condition of anonymity in order to speak freely about private events.

“He’s basically already running for the presidency,” said one of the people familiar with Pompeo’s New York meetings. A recent straw poll at the Western Conservative Summit in Denver showed DeSantis ranked first, just ahead of former President Donald Trump among potential presidential candidates. Behind Trump in that poll is Sen. Ted Cruz, Pompeo and Scott.

Trump has not ruled out running for president again after losing in 2020 to President Joe Biden. Republican hopefuls will likely be hesitant to run until Trump decides whether he will make a go of it.

Many of those heading to New York to connect with donors are part of the same group of possible 2024 contenders who took part in a meeting with political financiers in Texas. As CNBC reported at the time, that event was organized by longtime political strategist Karl Rove.

A recent Morning Consult/ Politico poll shows Biden with 53% approving of the job he has done and 44% saying they disapprove of his first few months as commander in chief.

Representatives for Pompeo, Scott, Rubio and DeSantis did not return requests for comment.

The New York metro area is home to some of the most affluent donors in the country. Data from the nonpartisan Center for Responsive Politics shows Republicans raised over $88 million in New York during the 2020 election cycle. That total is over $20 million more than GOP candidates raised in the region during the 2016 election. Democratic candidates have fared better in the blue state, with New York donors contributing over $385 million to those running on that side of the ticket.

An invitation to an event on June 11 for Rep. Andrew Garbarino listed Pompeo as the special guest. Garbarino is running for reelection in the New York congressional district he won in 2020 by around 6 percentage points.

The fundraising lunch took place in Manhattan, with a bunch of wealthy donors listed on the invitation as hosts, including billionaire John Catsimatidis, who owns the New York supermarket chain Gristedes and ran for mayor in 2013, along with his daughter Andrea Catsimatidis, chairwoman of the Manhattan Republican Party. Other financiers listed as chairs of the event’s host committee included real estate executive Peter Kalikow and Robert Rosenthal, a founder of a Long Island based investment firm.

Tickets for the fundraiser went for up to $5,800 per person and political action committees had to pay up to $10,000.

People familiar with Pompeo’s efforts say he was also featured this month at one of the first private in-person meetings since Covid for the Hudson Institute. Pompeo is a distinguished fellow at the conservative think tank.

That gathering was at the New York-based Mandarin Oriental in an apartment that is said to be owned by the Ricketts family, according to the people familiar with the meeting. Attendees included several executives with ties to the think tank. The Mandarin Oriental in New York has hotel rooms and residential apartments.

Members of the Ricketts family are some of the wealthiest and most powerful business leaders within the Republican Party. Todd Ricketts is co-owner of the Chicago Cubs and the Republican National Committee finance chair. Todd’s brother Pete is governor of Nebraska, and their father, Joe, is the former CEO of TD Ameritrade. The Hudson Institute’s 2019 annual report lists Todd Ricketts as a member of the group’s advisory board and a donor to the organization who gave $5,000 to $20,000.

A person familiar with the meeting said that neither Todd, Pete nor Joe were present during the Hudson Institute’s gathering featuring Pompeo, but a lesser-known representative for the family was there. Pompeo touched on national security issues during his speech, including a repeat of his claim that the coronavirus pandemic started due to the deadly virus leaking out of a lab in Wuhan, China.

Biden ordered a closer intelligence review of the origins of Covid-19 with a focus on what the administration believes are two likely scenarios of whether the virus emerged through natural occurrence or a lab leak.

Representatives for the Ricketts and the Hudson Institute did not return requests for comment.

Scott took part in a virtual fundraising event in May for his South Carolina reelection bid. The event featured New York-based attorneys, according to an invitation, and organizers said they raised $100,000. They are set to host an in-person event for Rubio’s Florida reelection campaign in September.

DeSantis’ allies have signaled they are planning to set up an event in the Hamptons for his Florida gubernatorial campaign.