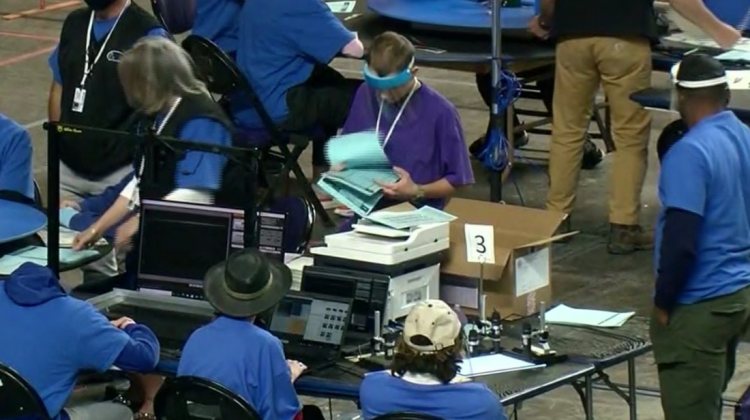 A 57% majority of Americans say that, based on what they’ve heard about the audits conducted or proposed by legislatures in some states, they view them as “partisan efforts to undermine valid election results.” Just a third say they see them more as “legitimate efforts to identify potential voting irregularities.”

Further, 40% of the public says that such audits will weaken American democracy, while 20% say it will strengthen it. Another 35% expecting them to have no impact.

Although the survey didn’t explicitly identify the audits as Republican-led efforts, it still found sharp divides along political lines. A near-universal 90% of Democrats view the audits as bad faith, partisan ploys. Republican support for the audits is broad, but less overwhelming: 59% call them legitimate, with 31% seeing them as attempts to overturn valid results.

Both the overall numbers and the partisan divides reflect wider opinions about the 2020 election. Most Americans, 61%, believe President Joe Biden won the 2020 election fair and square, a number that’s budged little since last November. But 57% of Republicans say they believe the baseless theory that Biden’s victory was due to voter fraud.

Monmouth’s survey also looked at issues surrounding voting policy, finding broad public consensus on two issues — 71% say that in-person early voting should be easier, and 80% that they generally support requiring voters to show a photo ID in order to vote. Each has majority support among both Democrats and Republicans, although the strength of that majority varies by party. Democrats are 33 percentage points likelier than Republicans to say in-person voting should be easier, while Republicans are 29 points likelier than Democrats to back photo ID requirements.

But there’s a far more pronounced divide over voting by mail: Democrats are 58 percentage points likelier than Republicans to say it should be made easier, with most Republicans rejecting the idea.

Those results are the culmination of an election cycle in which choosing to vote by mail abruptly transformed into a partisan issue, in line with former President Donald Trump’s vocal attacks against the practice.
GOP views on who should be allowed to vote ahead of Election Day have undergone a rapid shift as well. In 2018, per Pew Research Center polling, 57% of Republicans thought any voter should have the option to vote early or absentee without having to document a reason for doing so. By June 2020, that number had fallen to 44%; in April of this year, just 38% favored such broad access to absentee voting. Democratic opinion remained stable throughout that time.

The Monmouth University poll surveyed a nationally representative sample of 810 American adults by phone between June 9 and June 14, using live interviewers to reach both landlines and cell phones. The results have a sampling error margin of plus or minus 3.5 percentage points for the full sample.